Have you ever wondered what life might be like after a close encounter with death? Would you gain a new perspective, perhaps? But then ... what if you discover, to your utter horror, an invading consciousness controlling your every step, making you do things which are bizarre and erratic?

Alternatively, have you ever peered through the windows of time and weighed the choices you’ve made which led you to your current destination? Was it the inner workings of your soul, guiding your every step or was it something larger, working in the background, orchestrating every aspect of your life?

Perhaps it is these soul-searching queries underlying the books Someone’s In My Head and How I Became A Physicist that struck a chord with Malaysian readers.

Steven Steel’s Someone’s In My Head and Viola Ho’s How I Became A Physicist bagged the top prizes in the fiction and nonfiction categories respectively at the 2017 Popular-The Star Readers’ Choice Awards (RCA) on Saturday.

Steel’s science fiction novel follows Jarod Wickernham, a teenager who escapes death after a bad car accident. But what he wasn’t ready for was to discover another consciousness controlling his mind. Jarod plunges into a thrilling and suspenseful adventure to find out the identity of this invading mind, leading him to shocking truths which have been buried for years.

What may have appealed to Malaysian readers about the 20-year-old’s debut novel, besides the plot, is the humorous tone of the book.

“I tried to keep it as light-hearted as possible and injected it with humour. But what could have made it an interesting read for people is that my novel is not too factual.

“Some may think science fiction novels are very pretentious and incomprehensible due to the scientific elements. What I have done is to make it more close to home, with relatable characters and struggles,” Steel, a university student, said. (Steel’s real name is Tey Feng Nian.)

The Penang-based author shared that it was in his late teen years that he and a friend began toying with the idea of a science fiction novel on mind control. He kept writing and, ultimately, his efforts culminated in this award-winning novel.

This is not Steel’s only win for Someone’s In My Head. He picked up a 2015 Wattys Award for Best Use of Visuals for the online version of his novel that he had uploaded at Wattpad.com, the free fiction site.

Pleasantly surprised at his win, Steel has a few words of advice for young and budding writers out there: “Follow your dreams, don’t get discouraged by criticism or people who don’t appreciate what you’re doing, and stay determined.

“Also, have a voice of your own. It’s OK to get inspiration from other authors but don’t copy them. Find your own voice, your own style of writing,” he shares.

It is very much her own voice that comes across in Ho’s short memoir, How I Became A Physicist, that took first place in RCA’s nonfiction category. As the title suggests, the book is essentially about Ho’s journey of becoming an experimental physicist upon receiving a scholarship from prestigious Oxford University.

What makes Ho’s book, her first, stand out is the fact that it is written in a very easy to read manner, suitable for just about anybody. Despite her background, the 27-year-old does not overwhelm her readers with scientific jargon or bombastic language.

“I just wanted to share my journey and hopefully inspire youngster along the way to join STEM (science, technology, engineering and mathematics) related careers. There is a lot to learn, experience and enjoy in STEM,” Ho says in an e-mail interview, explaining the motivation for writing a memoir at such a young age.

Other than her book, Ho found another way of encouraging young people to get into STEM: she is one of the founders of The Great Lab, a student-led hub for Malaysian students to develop solutions for projects and postgraduate research. The Oxford Masters graduate is now pursuing a PhD at Germany’s Technische Universitat Munchen.

He’s practically a veteran at the RCA, as this is his third consecutive win. His previous collection of spooky tales, Horror Stories, bagged the top fiction prize in 2015 while the novel A Malaysian Restaurant In London earned him second prize last year. With a track record of publishing dark fantasy and horror stories since the 1990s, it’s not for nothing that he’s been crowned the “Malaysia’s Prince of Darkness”.

The 52-year-old says the main reason his dark tales are well loved by Malaysians is because “we are a very superstitious lot”. “We love horror stories. We believe in the pontianak in the corner, the spirit of the coin, and all kinds of demons and ghosts lurking around,” he says.

Placing third in the fiction category is Vicky Chong, Alexandria Goh and Sona Ghose’s The Kid From The Big Apple. The touching novel follows 11-year-old Sarah who was raised in New York City and due to unavoidable circumstances, has to move to Malaysia to live with her estranged grandfather. The trio was represented by their publisher at the award ceremony on Saturday.

Bagging the second prize for the nonfiction category are husband and wife team Md Mahmudul Hasan and Raudah Yunus, who edited Tales Of Mothers.

Written by various authors, Tales Of Mothers is a collection of eight real-life stories about the peaks and valleys of motherhood. The book also features expert articles on parenting, special children, and mothers with careers.

Coming in third is former first lady Tun Dr Siti Hasmah Mohd Ali, who wins the prize for her long-awaited biography My Name Is Hasmah. The book takes readers into a world that few were privy to till now. Dr Siti Hasmah charts the multiple roles she has had to juggle throughout her long and illustrious life – as a daughter, doctor, wife, and mother.

Both Steel and Ho received RM3,000, a trophy and a commemorative plaque each while the second and third-place winners in both categories each received RM1,500 and RM1,000 respectively at the awards ceremony held at the Kuala Lumpur Convention Centre on July 1. The award was held in conjunction with BookFest@Malaysia 2017, which ended on July 2. Both events are organised by the Popular Book Co (M) Sdn Bhd.

In its 10th year, the RCA is the only literary awards in Malaysia that honours and rewards local bestselling authors. The 20 contenders, 10 each in the fiction and nonfiction categories, authored the top sellers last year in Popular and Harris bookstores nationwide. (Harris bookstores are a part of the Popular group.)

What makes the RCA unique is the fact that readers play the roles of kingmakers. The top three winners for both categories are picked by readers via a voting campaign; this year, the campaign ran from April 14 to May 21 in Star2’s Reads pages. The 100 readers whose votes matched the overall results also walked away with prizes: each winner received a RM50 Popular book voucher and a free-for-one-year Popular card membership.

Here is the full list of titles nominated in this year’s Popular-The Star Readers’ Choice Awards (arranged in alphabetical order).

>Ah Lao And The Paper Men by Wong Ming Yook

>Hungry In Ipoh edited by Hadi M. Nor

>Someone’s In My Head by Steven Steel

>Sorcerer To The Crown by Zen Cho

>The Kid From The Big Apple by Vicky Chong, Alexandria Goh & Sona Ghose

>How I Became A Physicist by Viola Ho

>Sambal On The Side ... With A Kick by Brenda Benedict

Star Media Group is a media partner of BookFest@Malaysia 2017 and the Readers’ Choice Awards. 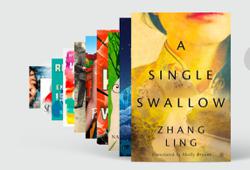