A multi-dimensional look at migrant workers in the region

“What would you do if you miss your children and family back home?” The “correct” answer in this case is, “I will sing a song to the children of the future employer”.

It is an interesting, though rather surreal and slightly disturbing, take on the ascribed role of domestic workers, a rumination on what potential employers might value as desirable traits and, by association, higher employability.

This is a segment in the prescribed script in If You Miss Home, a video by Elvis Yip Kin Bon, comprising interview footages designed with preset dialogues.

Afterwork, first shown in Hong Kong in March last year, is a group exhibition that explores issues of class, race, labour and migration in the region and beyond, as well as their corresponding aesthetics and histories. Its Malaysian edition is presented by Ilham Gallery, in collaboration with Para Site, a leading contemporary art centre in Hong Kong, it includes the work of artists of different practices, contexts and generations, essentially combining different approaches in artistic expression of the everyday.

“When we saw the exhibition in Hong Kong last year,” says Ilham Gallery director Rahel Joseph of the show’s first instalment, “We were struck not only by its artistic merit but by the subject matter which we felt was very relevant and would resonate with Malaysian audiences.”

“This is the first time Ilham is collaborating with Para Site Hong Kong, and it reflects our commitment to building long-term partnerships with institutions, both in Malaysian and abroad,” she adds. 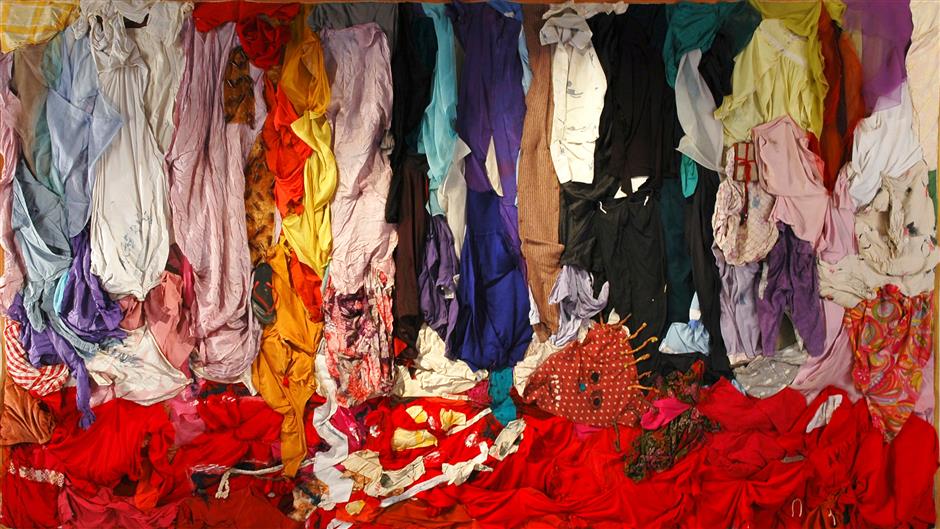 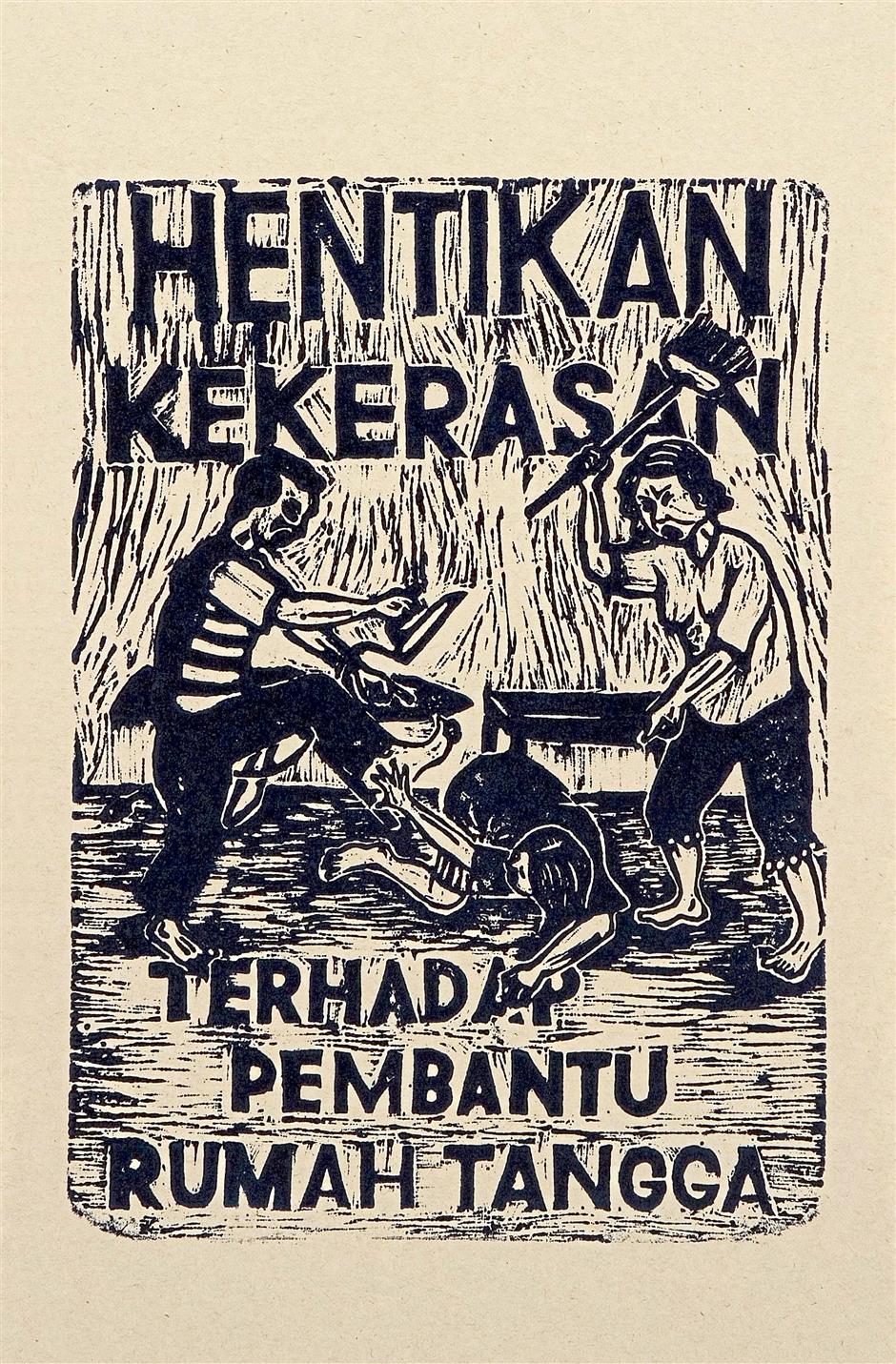 Afterwork is curated by Freya Chou, Cosmin Costinas, Inti Guerrero and Qinyi Lim, together with Rahel Joseph and Azzad Diah for the Malaysian edition, which is currently ongoing at Ilham Gallery in Kuala Lumpur.

Gan’s Portrait Scape Of Contemporary Migration, painted in oil and acrylic on wooden panels, is influenced by footage of Rohingya refugees being abandoned by human traffickers and dying on the open seas. The work is a response to the universal identity crisis surrounding migrants, but is framed within the context of Malaysia city streets.

Sabah-based art collective Pangrok Sulap, working in its signature woodcut print on fabric in MA=FIL=INDO, juxtaposes a utopian vision of the 1963 proposed confederation of Malaya, the Philippines and Indonesia, against the discordant struggles of Filipinos and Indonesians migrant workers in present-day Sabah.

Afterwork was initially motivated by the desire to help reimagine the symbolic borders of what constitutes Hong Kong citizenship. The Hong Kong’s Migrant Domestic Workers Project at Para Site stated in early 2015, a long-term initiative that aimed to build connections between the artistic community, the city’s wider public sphere, and the domestic worker community. It set out to contribute a reformulation of sorts, of the images and words used to give meaning to the notion of ”community”. 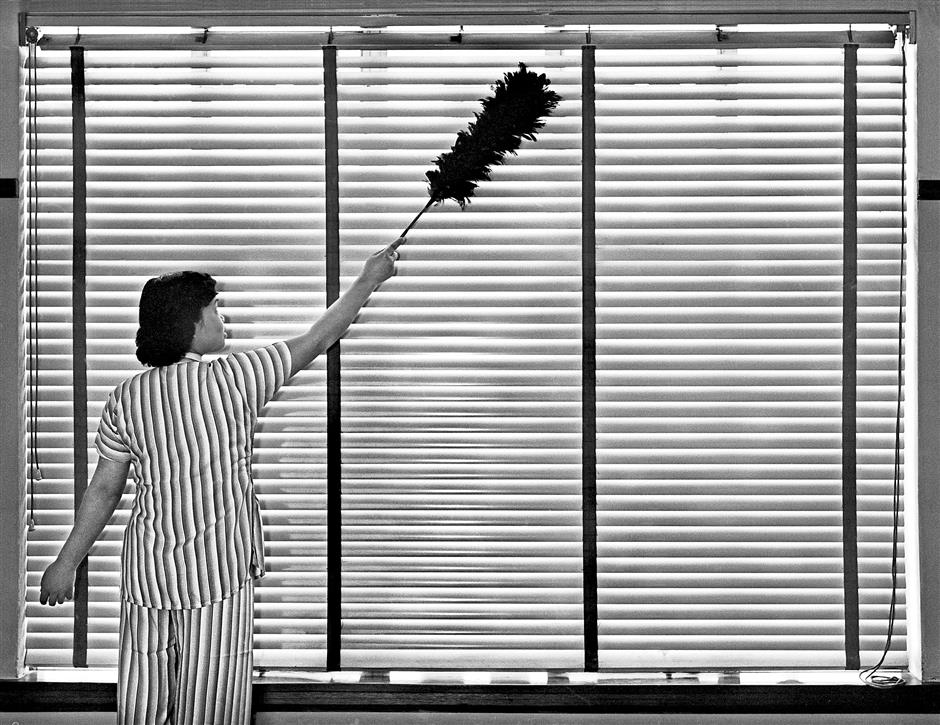 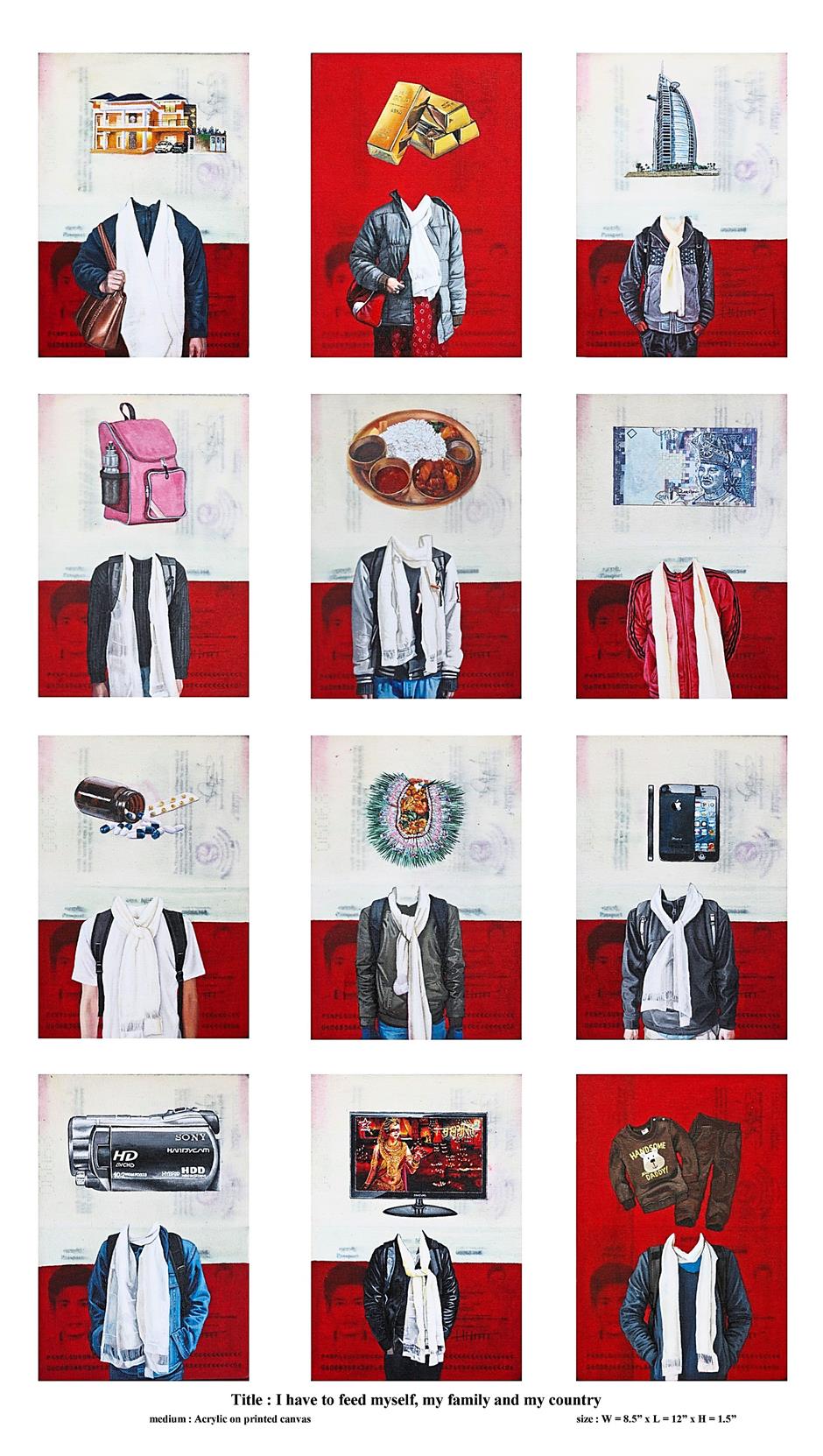 Hit Man Gurung’s I Have to Feed Myself, My Family and My Country (acrylic on painted canvas, 2013).

More often than not, domestic workers are rendered “invisible”, but almost paradoxically, it is this community that is perhaps the most visible every Sunday, as they gather in Hong Kong public spaces for picnics and other activities.

“It was the social spaces and cultural structures constituted around this regular gathering that facilitated the beginnings of this project,” says Chou in an email interview from Hong Kong.

Domestic workers are Hong Kong’s largest minority group and one of the most visible components of the city’s society, she adds, but their legal and symbolic status are matters of constant negotiation, reflecting the shifting position of Hong Kong citizenship.

This situation is mirrored in many other countries, including Malaysia.

“It reflects the many complexities behind the continuing nation-building processes of our times,” notes Chou.

“The stories of migrant workers in Hong Kong, Malaysia, and elsewhere, are therefore crucial narratives that need to be told alongside the growing affluence of many of these societies in past decades, together with the stories of struggle of what is considered the ‘local’ working class and of other groups that have seen themselves historically disadvantaged, and on the backdrop of the different historical waves of migration that have shaped so much of our world”.

The exhibition came a later stage of the project, nestled within a broader context of the initiative in its entirety, and composed by association of different – and sometimes divergent – narratives on migration, representation and the fluid definition of “class” and “race”.

Over 30 artists from the region and beyond are participating in this project, with representation from Hong Kong and Malaysia, Indonesia, Singapore, Nepal, the Philippines, Taiwan, Spain and Colombia, among others. Work across various medium, including painting, photography, film and sculpture, are on display, some of them interactive in nature. 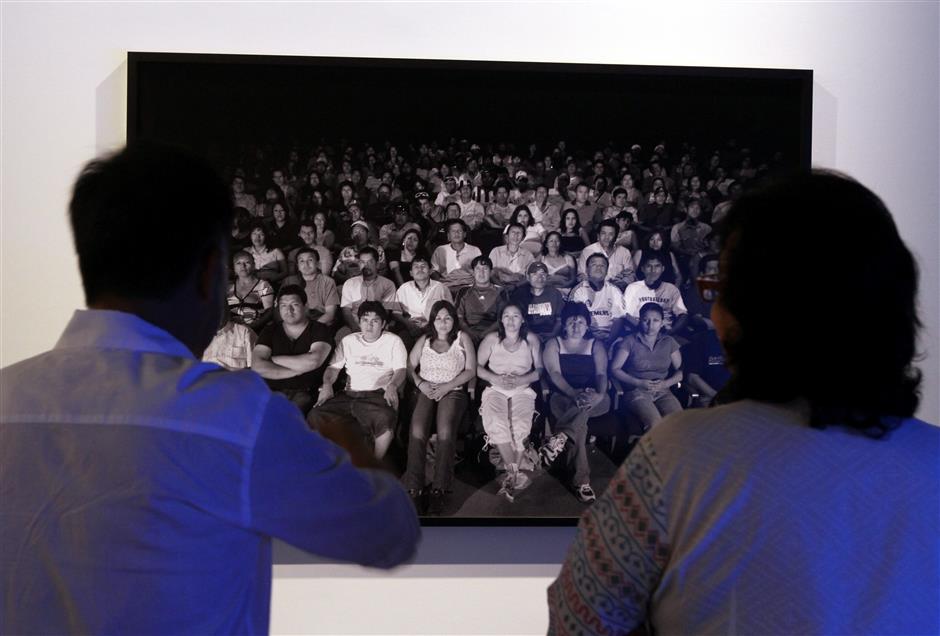 This exhibition takes as its point of departure the specific context of migrant labour in Hong Kong, but at the same time unpacks larger contemporary issues of migration, which are just as relevant in other parts of the region.

Malaysia, for instance, is one of the largest importers of foreign labour in Asia, with an estimated more than four million migrant workers in the country, both documented and undocumented. As a developing nation, much of our growth has been fuelled by the millions of migrant workers from neighbouring Bangladesh, Indonesia, Myanmar, Nepal and the Philippines. They are, undeniably, a vital part of several industries in Malaysia. 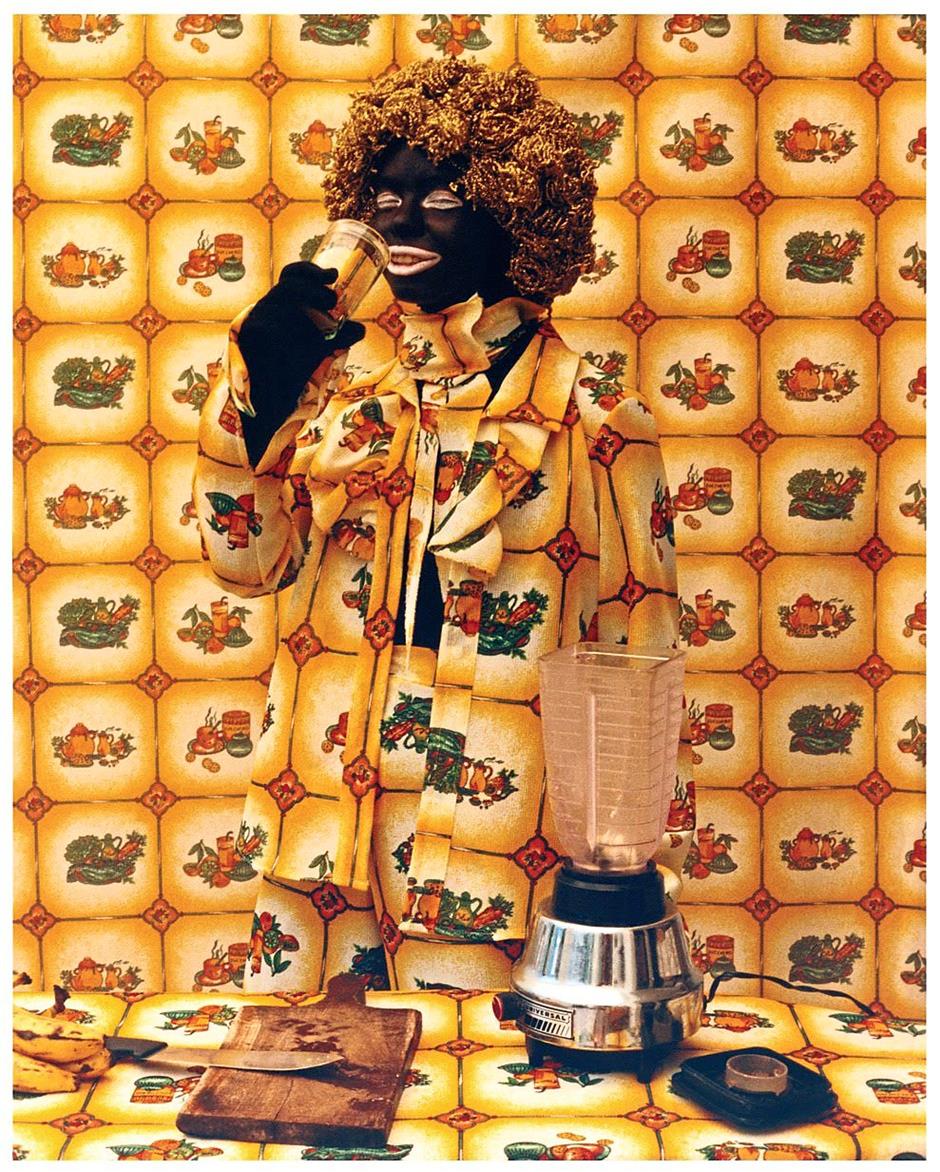 “Afterwork is an autonomous proposition, including the often ambivalent and polychromatic aspects of the social and cultural mosaic of Hong Kong, the Philippines, Indonesia, as well as of other contexts. The exhibition does not mean to patronisingly ‘give a voice’ or be the vindicator of the struggles of migrant workers,” says Chou.

“It does, however, take into consideration the representation of migrant domestic workers, from various perspectives, while putting under question, throughout the show, the very notion of representation.”

Colombia’s Liliana Angulo’s transforms herself in Black Utopian into a black-face male singer with an afro made of out steel wool, becoming “invisible” as her suit merges with the pattern of the kitchen where the scene takes place. She references Western pop culture in this piece, where historically black people are often stereotyped as either “the help” or music entertainers.

Hong Kong’s Joyce Lung Yuet Ching’s ceramic cleaning products sculptures, which are inspired by her “intense relationship” with her maid, highlight issues relation to foreign domestic workers in the country.

Indeed, the works in Afterwork are as diverse as they come, effectively offering an alternative narrative for some of the most vulnerable in our midst, giving a face to the nameless migrant worker and introducing an intimate side to this pertinent, but often overlooked, socio-economic issue.

“We also look at historical ways in which class has been constructed in Hong Kong and the highly polarised societies of South-East Asia, and how race remains an issue within many countries here,” concludes Chou.

A multi-dimensional look at migrant workers in the region