The Serambi wooden chair designed by Shahril, inspired by the veranda in traditional Malay houses.

But take a closer look at these pieces of furniture and you will see the marks of passion and creativity that drive the four young designers who made them.

At this year’s International Furniture Fair Singapore (IFFS) held in March, these designers showcased their products under the Tanggam banner.

Tanggam (the Malay word for mortise or dovetail) is an initiative launched by the Malaysian Timber Industry Board to nurture and promote outstanding young designers from Malaysia.

We delve into the design details, inspiration behind the pieces and the long-term aspirations of these four designers.

An avid traveller, industrial designer Stephanie Ng has exhibited her works in London, Melbourne and Bangkok. As part of the Tanggam collective, she also exhibited at the SaloneSatellite 2015, part of the prestigious annual Salone del Mobile in Milan, Italy.

Industrial designer Ng, who believes that “good design should have cohesive synergy rather than a standalone object”.

The 31-year-old holds a Bachelor of Design in Industrial Design from Swinburne University of Technology, Australia.

Her design studio, Stephanie Ng Design, which is based in Kuala Lumpur and Melbourne, offers a range of lighting solutions for residential and commercial applications, as well as custom design services in home decoration and design, lighting and furniture.

Besides locally, her work can be found in New York City, Paris, Bucharest and differents parts of Australia.

Ng and her team like to use unique materials to make an ordinary product special. The studio also incorporates notions of craft into their work. One example is their Luna Lana lighting range, handmade from 100% treated merino wool to create intricate woven lighting designs that wrap and intertwine.

Exhibited at last month’s IFFS was Ng’s Scoop series of lights and furniture.

The Scoop pendants bear a simplistic form with clean contours and is reminiscent of an ice cream cone. The bright coloured ring suggests different flavours that are suitable for various interiors with the option to install the lights with brightly-coloured cords.

Ng’s Scoop series of lights and furniture; the Scoop pendants bear a simplistic form with clean contoursand is reminiscent of an ice cream cone.

“My design studio started designing bespoke lighting for projects and we have a small product range. One product of which is our most popular and has been used in projects here and in America and Europe is our Scoop pendants. Therefore, we saw an opportunity to expand the series into furniture using key elements of the pendant lighting design, such as the colour, the curves and the minimalist appeal,” shares Ng about the collection.

“The pendants are what inspired the series, so we would really like to see people using the entire collection together,” she adds.

Ng believes that “good design should have cohesive synergy rather than be about a standalone object”.

“We believe that the integration of pieces produces a total effect that is greater than the individual pieces themselves.

“This came about with our first creation, the Halo Modular lighting, which is a piece that can grow as far as your space allows, as its individual modules can be added on to create a larger feature pendant.”

Products, Ng feels, should enable users to showcase their own personality; in the case of the Halo lights, you can make up your own configuration and colour scheme – “So the very same light can look completely different at my place and at yours.”

Versatility is a big part of Ng’s designs, as “we believe it is increasingly important in society these days, in order to let people stand out and personalise their belongings,” she adds.

Shahril Faisal founded Shahril Faisal Design in KL, in 2014, a studio specialising in producing furniture, lighting and interior accessories that are timeless objects that “reflect the delicacy and simplicity of traditional Malaysian roots”. This same philosophy informs the practice that the 33-year-old set up last year in Delft, The Netherlands.

Shahril graduated with a Bachelor of Science in Industrial Design from Universiti Teknologi Malaysia in 2006 and within six years won his first prize when he was the 2012 winner at the Mobili Furniture Design Competition organised by the Malaysian Timber Industry Board.

From 2013 to 2015, as part of Tanggam, he participated in the Salone del Mobile’s SaloneSatellite. In 2014, he also won an international chair design competition organised by Italian furniture company Formabilio.

At the IFFS 2016 last month, he featured his Serambi wooden chair and Lasah bamboo trestles.

“The Serambi is a raised veranda which is always part of the traditional Malay house. This veranda is a multifunctional space that provides people with an area to relax in, and which can also be used to entertain guests while maintaining the privacy of household members.

“The veranda easily evokes an inviting feeling while enabling spontaneous interaction to occur between household members and passers-by. So it is this transparency and airiness that I wanted to capture in the design of the chair,” explains Shahril.

The idea behind the Lasah bamboo trestle, made almost entirely with bamboo, was to use the natural material in its original form without deconstructing it into laminated panels.

Shahril also designed it in such a way that it can be constructed using simple tools, such as a knife or cutter, which are easily accessible to local folk in rural villages.

“The idea is to involve the local people as stakeholders in a sustainable business model. In addition, a feature of the trestle is the innovative joinery that helps to keep the bamboo in place while acting as structural support. It becomes a visual highlight and permits the trestle to be easily taken apart and assembled without requiring any form of hand tools,” he explains.

Shahril’s winning design at last year’s Formabilio contest – the 48th – was the Twine chair. The win is quite a coup, as the Italian furniture brand is known for holding global competitions to pick designs that it then incorporates into its portfolio – Shahril’s chair might well end up being sold globally.

“The whole concept of Twine is to play around with people’s initial perception of a particular material’s attribute and intrigue their feelings. It’s like, your mind says that it’s hard but your feeling says otherwise, because the visual contradicts the perception of the mind,” explains Shahril.

The Twine chair uses laminated plywood and mild steel tubes treated to look as if they are made of thick rope holding the chair together. The intertwining of the leg and backrest composes the armrest and becomes the focal point of the chair.

Shahril wanted to use bamboo in its original form for the Lasah bamboo trestle, shown here with a glass top.

“These were the subtle and delicate details that I tried to embed into the design. It intertwines form with function and comfort with style,” Shahril adds.

Industrial designer Sim Chia Yi exhibited at a SaloneSatellite in Milan in 2014 and 2015 under Tanggam as well.

Sim was also one of 11 finalists in the Furniture Design Award 2016, an annual furniture design competition organised by the Singapore Furniture Industries Council. The design she submitted for the competition was a coffee table she calls Gravity.

“The design is kept simple in its form by adopting the most obvious but neglected theory of gravity to connect furniture parts,” explains Sim, 26.

The design utilises sustainable materials to construct some parts of the table. The base of the table is made from a special mixture of paper pulp using old newspapers.

At IFFS this year, she displayed her creation called The Odd Plate, a coffee table with a simplified form that features the beauty of the Malaysian timber species semangkuk.

“As a designer, I wanted to highlight the natural beauty of the wood grain of the selected species. So I chose to keep the visual distraction in physical form at a minimum while highlighting the essence of the piece through a brass plate,” explains Sim.

There are two shapes of the design – a cube shape and a rectangular one – both forming a cute collection.

Sim graduated with a Bachelor of Arts in product design futures in 2012 from East London University. In the same year, she was awarded first prize in the Ideation Award, organised by the Malaysian International Furniture Fair, for her wok-shaped rattan seat design entitled Just Like Old Times.

The Gravity coffee table by Sim, which adopts the theory of gravity to connect furniture parts.

In 2015, Sim set up her own design collection under the brand Aarxx, and also co-founded Mukk, a lifestyle brand in the same year.

“Aarxx is a way to express design in the form of art and experience. Most of the designs published in this brand are very unconventional or they provoke a sense of intrigue and fascination,” she shares.

The cube Odd Plate coffee table by industrial designer Sim Chia Yi which features a simplified form that highlights the beauty of the Malaysian timber Semangkuk.

“Our product design in Mukk revolves around adopting wood as the core material, or a combination of wood and (other materials). Our products are mostly handcrafted; our aim is to nurture the design scene in Malaysia by creating a local design brand, as a prime mover to inspire the rest to celebrate design,” she says.

Furniture and playground designer Daniel, who aims to portray his heritage through his designs.

Furniture and playground designer Daniel Idros constructed his own in-house studio, Knendhoi, in Kuala Lumpur in 2009.

He graduated with a Bachelor degree in Industrial Design from Universiti Teknologi Mara (UiTM) in 2011 and started his first job as an office furniture designer in Kuala Lumpur.

In 2014, he won fifth place at the Malaysian Timber Industry Board’s Mobili Furniture Design Competition and, in 2012, he was among the top 10 finalists in the same competition.

At the IFF in Singapore this year, he exhibited the Chongak Coffee Table from the Chongak Series No.1.

“Nowadays, we are kept busy on electronic gadgets such as smartphones and tablets most of the time. I wanted to create an environment where everyone can participate in an activity together, through furniture.

“The Chongak is a coffee table that is inspired by the traditional game Congkak. Using the coffee table as a medium, I hope to bring back the game and the memory of playing it in the past, with the hope that adults can introduce the game to youngsters,” shares Daniel, 30.

Two other unique designs by him are the Leegat Stool N° 4B, inspired by tap dance, and the Three Mountain table.

The Leegat Stool is designed with various types of legs that produce different pitches or music notes when they are tapped on the ground. Users can generate their own music through movement while they are seated on the stool. The pitch changes depending on which stool leg touches the ground.

Meanwhile, the Three Mountain design consists of three main components that act as islands, which are made with silicon rubber.

The islands form the compartments for activities that involve the five senses – seeing, smelling, hearing, touching and feeling.

The table top is made with meranti timber and reflects a lake that has been covered by the three islands that are placed in the middle of the table.

Daniel’s Three Mountain table design, which has compartments for activities that involve the five senses.

“My personal goal is to be able to portray my heritage through my design. I’m also looking forward to collaborating with design firms/designers from all around the country.

“Through that, I hope to enhance my ability to produce even better designs,” says Daniel. 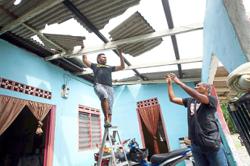