Giant gold cubes designed to be defaced and a large-scale tribute to Hong Kong’s lowly cardboard sellers took centre stage as Art Basel opened its doors in the city on March 22.

VIP guests flooded into the sprawling two-floor exhibition at the harbourfront convention centre, with more than 200 galleries from around the world hoping collectors will bite, despite China’s economic downturn. Tuesday’s opening kicked off two days of private views before the public are given access today, in a week when Hong Kong becomes a frenzy of art events.

British artist Tracey Emin launched her first ever solo show in greater China in Hong Kong on Monday, and Japanese artist Tatsuo Miyajima has his latest light creation beaming out of the city’s highest tower each night.

But in a refreshing antidote to the champagne and glitterati, one of the most prominent exhibits at this year’s edition is Tintin Wulia’s grand-scale Five Tonnes Of Homes And Other Understories.

Huge compacted bales of cardboard decorated with murals hang from chains forming a spiral – a reminder of the city’s ubiquitous elderly cardboard collectors who hunch over trolleys and deliver to recycling depots in exchange for a few dollars. 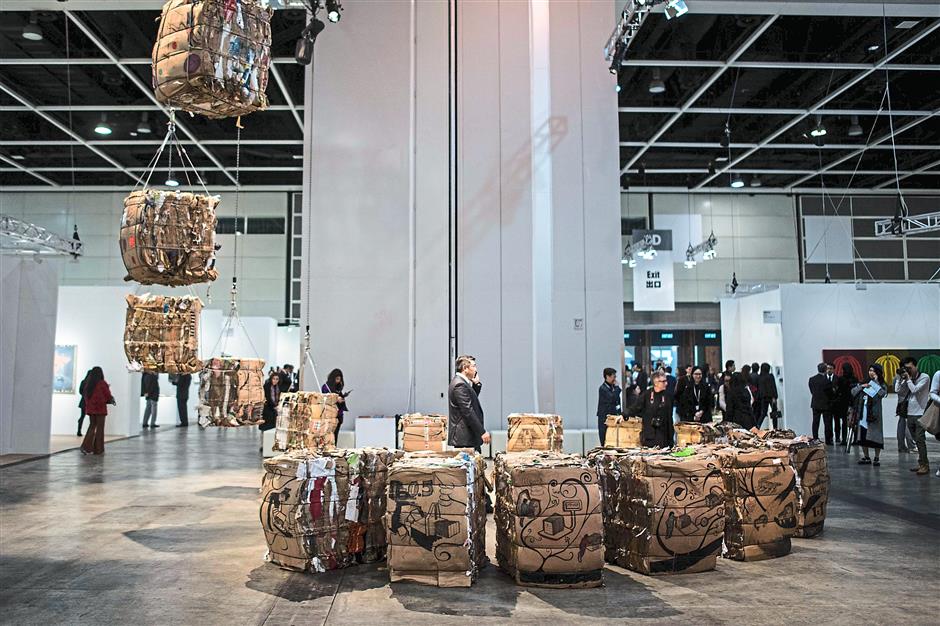 One of the most prominent exhibits at this year’s edition of Art Basel in Hong Kong is Australia-based Indonesia-born Tintin Wulia’s grand-scale Five Tonnes Of Homes And Other Understories.

Wulia spent two years on the project tracing the cardboard’s route through Hong Kong, including collaborating with Filipina domestic workers who use cardboard to create windbreaks for themselves when they gather in the city’s public spaces to socialise on Sundays.

Both groups are an integral part of Hong Kong’s landscape – both belong to an underclass a world away from art’s big spenders.

“I feel sometimes the art fair is quite detached – people fly in and fly out,” says Wulia, born in Indonesia and based in Australia.

“For me it’s connecting the art fair to the rest of the world and the real Hong Kong.” 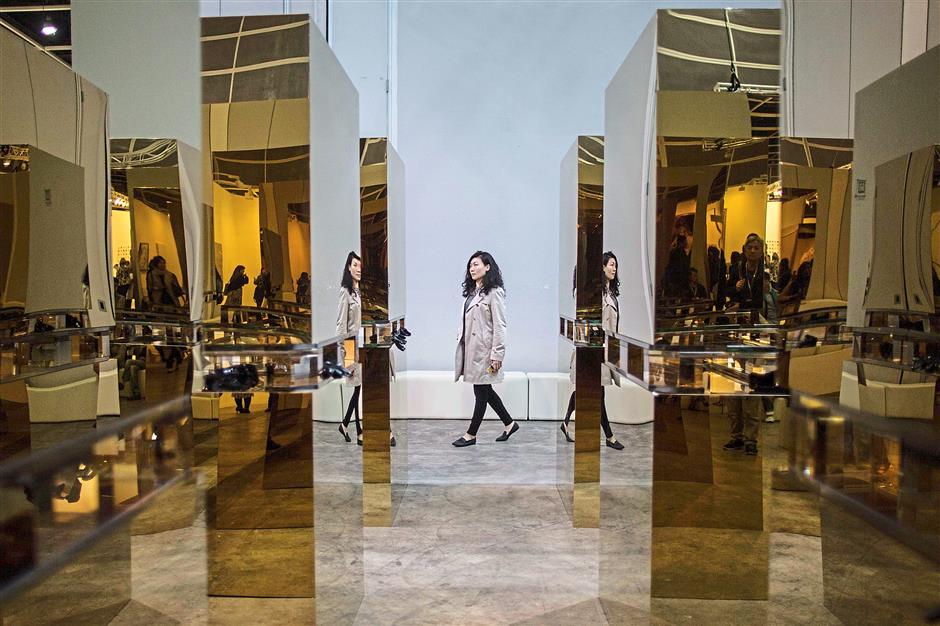 Chinese artist Zhang Ding’s 18 Cubes shines in brilliant gold – with visitors encouraged to leave their mark by scratching and defacing the glinting surfaces.

South Korean Kyungah Ham’s embroidery gold chandeliers also glitter, but make a political point – they use textiles made in North Korea to highlight the contrast between the two nations, and the gulf between the impoverished and political class. 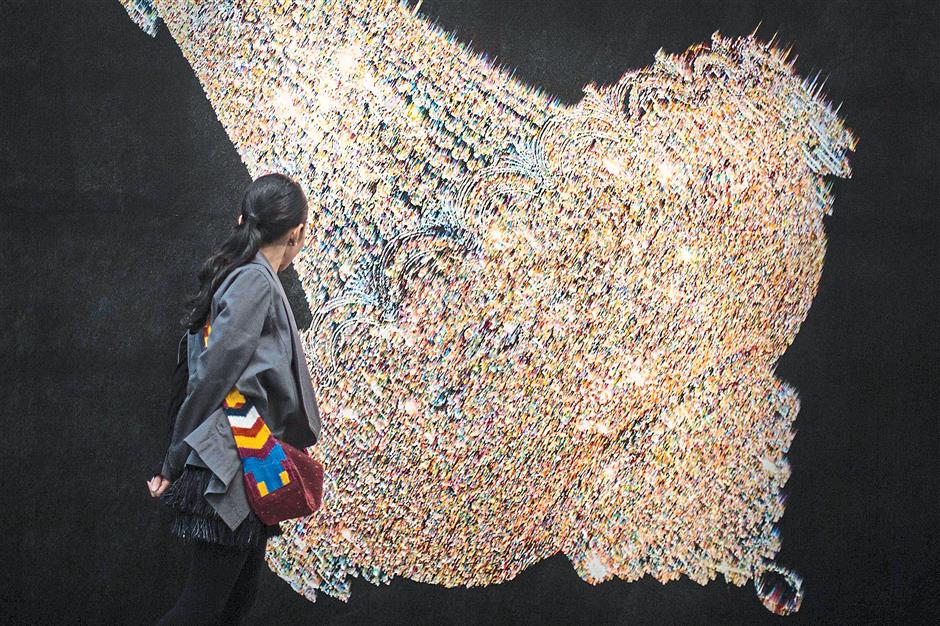 A visitor looks at a piece of a series by South Korean artist Kyungah Ham entitled Chandeliers For Five Cities.

The Hong Kong edition of the show, which also takes place in Basel and Miami, is now in its fourth year and has helped feed the city’s reputation as an art hub for Asia.

A host of new galleries have opened in recent years and major arts complex M+ is under construction.

“This week has expanded and expanded – it’s been amazing to see.” 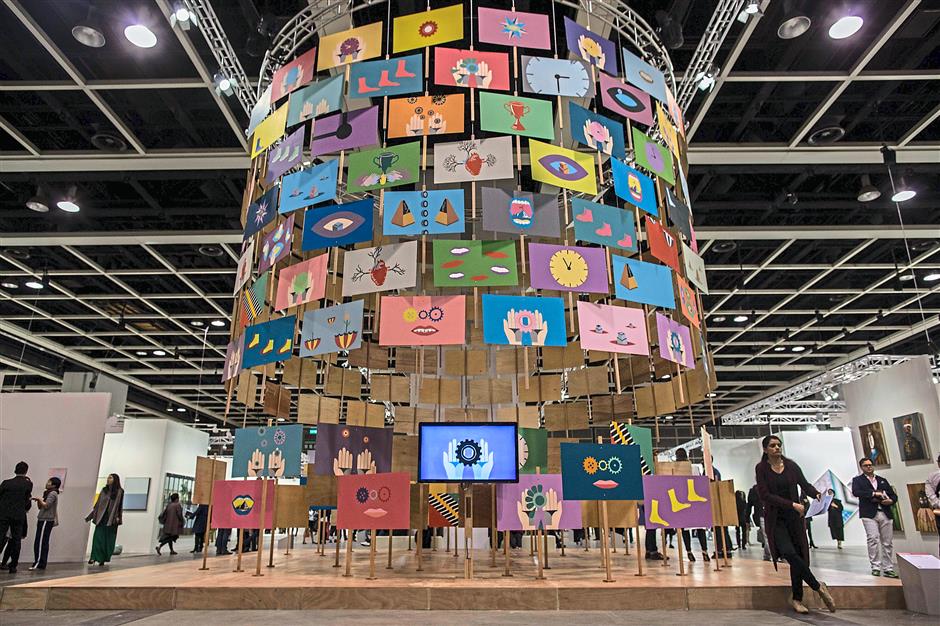 “We are an art hub in the sense of (being) a market where people buy and sell because of the low tax,” says art critic John Batten.

Better museums and an education system that emphasises the arts from primary school age were key to building up cultural capital, he said.