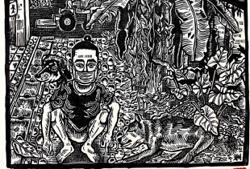 The arts centre changes up its artists residency programmes.

For over two decades, the Rimbun Dahan Arts Centre in Selangor has hosted more than 100 individuals, who have benefited from the unique atmosphere of Rimbun Dahan to build their own artistic practice.

The centre runs a range of artists’ residencies to encourage visual artists, choreographers and other creative individuals to explore and develop their artistic work.

In light of their work, however, Rimbun Dahan Arts programme director Angela Hijjas said it was time to rethink Rimbun Dahan’s programmes.

“In the past our residencies were supported financially by (her husband and co-founder) Hijjas’ architectural practice, but as a new generation of senior architects has emerged in the firm, it seemed unfair for us to lumber them with the financial obligation to support it further. So one of our aims was to make the residencies less demanding financially so that we could support it ourselves,” says Angela.

She revealed the changes were that they would no longer provide fully funded residencies for a year. Instead, the stays would last for about three to six months. Nor would they provide exhibitions on the large scale of commercial galleries, with expensive catalogues and launches.

“We still support artists from Australia, Malaysia and Asean countries, but we don’t provide those from developed countries any financial support, in fact we have started charging them for the privilege of staying with us. That revenue then supports artists from South-East Asia who could not afford to come to us unless they were supported,” she adds.

Angela said Rimbun Dahan will continue to host a range of artists, although its interest slants more towards emerging artists.

“We meet many talented young people and if they apply, they could come for a shorter period, and show their work at the end in a less formal atmosphere than a commercial gallery, and that experience may be a game changer for them.”

Hijjas and her husband have also included residencies in their hotel projects: the pair had renovated a collection of 16 old terraces in George Town, Penang for the Penaga Hotel, and supported a residency there as well.

“Hijjas and I are currently building a resort in Cherating, Pahang, and that too will provide artists with a unique experience in a special natural environment of coastal forest on the beach,” she says.

A residency programme and building in rural Australia are also on the cards (for Asian artists). Australian Pritzker Prize winning architect Glenn Murcutt is designing the building, that will be located in a paddock outside the town of Horsham, midway between Adelaide and Melbourne.

“The plan is to have an Asian artist and an Australian working together in a beautiful riverside location that is truly magnificent. The programme will be supported by the Horsham Regional Gallery,” says Angela.

Visit rimbundahan.org for more info on the centre’s art residencies.