Urbanscapes and its unknown artistic pleasures

Rising at dusk: Atan The Nate Berok, an installation by multimedia artist Fairuz Sulaiman and design collective Kontak! was the Kelantanese version of the famous Lochness monster. At Urbanscapes 2013, this piece of work was a crowd favourite.

The sideways view of Urbanscapes 2013 through art was both meaningful and quirky.

IT isn’t uncommon for festival-goers to think that the Urbanscapes festival is only about music and shopping. Even a whole week after the event, people are still Instagramming bootleg videos of Franz Ferdinand and an endless number of selfies of themselves wearing floral headbands.

Lurking in the shadows of those artificially-vignetted photographs, however, were the subtle yet significant art installations that attendees subconsciously appreciated.

By day, to the untrained eye, Nacho Ruiz’s Meeting Point may have come across as elaborate cobwebs but upon closer inspection, you could tell that the installation was in fact a collection of fibre-optic strands that lit up at night. Each strand was approximately 10m to 15m long and visitors were actually encouraged to take selfies with the piece!

“Although it is unusual to let people touch the art objects, they were very respectful and enjoyed creating their own images with the scenario given to them,” said Ruiz.

Rising at dusk: Atan The Nate Berok, an installation by multimedia artist Fairuz Sulaiman and design collective Kontak! was the Kelantanese version of the famous Lochness monster. At Urbanscapes 2013, this piece of work was a crowd favourite.

The artist from Valencia, Spain collaborated with fellow artists Maria Perez and Ferran Benavent to create the installation. On top of the 62 hours it took to set it up at the Malaysia Agro Exposition Park (MAEPS) in Serdang, Selangor, Meeting Point took up three months of pre-production work and has been exhibited in other festivals around the world.

“I wanted to work the relationship between the fibre-optic materials and one natural and local material like bamboo,” he added.

Another curious sight was Atan The Nate Berok – the Kelantanese version of the Scottish Lochness monster by multimedia artist Fairuz Sulaiman and design collective Kontak!. Similar to Meeting Point, the glory of Atan could only be taken in at night when splashes of turquoise, purple and pink light illuminated its body.

Not all the art at Urbanscapes needed to be seen at night though. The Empty Plates Pavilion by Red Hong Yi, David Yeow and Cheryl Heap was an architectural feat that was beautiful both during the day and night.

The piece wasn’t made only for aesthetic purposes. The structure, made of 5,500 recyclable plates took two months to complete and sought to educate visitors on the harsh reality that a large population of the Asian region still lives in poverty.

“The floating mass of empty plates is a symbol reflecting the 550 million people in Asia who go hungry every day – each plate representing 100,000 people,” said Red.

Another unique addition to the Urbanscapes art scene was the Market of Experiences created by Joanne Chew and Norman Teh.

“We wanted to challenge the traditional notion of a market where physical goods are sold and instead have people coming to the market be surprised, go on journeys, take risks, learn new skills and just thoroughly enjoy themselves,” said Chew.

One of the 10 Malaysian and Singaporean contributors to the Market of Experiences was local artist Sharon Chin who featured a small scale extension to her existing Mandi Bunga (Flower Bath) project, which is on show at the Singapore Biennale 2013. In Singapore, 100 people were involved in a public flower bath and a sarong decorating workshop.

In Serdang, Chin said that her Urbanscapes version of the Mandi Bunga was more like a community service where festival-goers could take a refreshing break by having their faces, hands and feet washed in a mini flower bath. The flower bath itself was like a quick cleanse with water, various plants, lime, ginger and non-toxic flowers.

“The idea is that it is also something that people can do at home,” said Chin.

Possibly the most conventional art installation at Urbanscapes this year was the Kedah International Photography Awards (KIPA) exhibition. The photographs shared the untold stories of Kedah and were mounted on reused industrial pallets in the centre of the venue.

“I chose a mix of mostly young photographers. Their views should be seen and heard,” said curator Vivian Toh.

It is possible that the most impressive thing about the art at Urbanscapes this year was not that it was beautiful, because it was obviously, but that everything seemed to blend into one unique and effortlessly understood festival experience.

Urbanscapes and its unknown artistic pleasures

Experience the minimalist art of Sol LeWitt through this free app 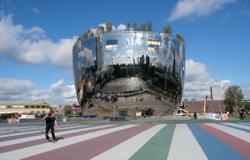 This mirrored depot will open Dutch museum's storage to public 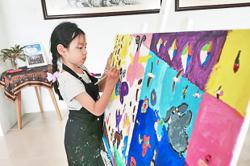