Amri Ginang's Prof Ungku Aziz (2012), a black and white photograph on canvas, is one of the illuminating highlights at the National Portrait Gallery.

THE late Datuk Mohd Hoessein Enas’s portrait of a sanguine Malay maiden Minah puts across a bittersweet longing of a rustic Malaya past.

Drawn by local art pioneer Hoessein in 1958, the oil on canvas piece Minah, seems to invite visitors as they wander through the doors at the newly opened National Portrait Gallery (Galeri Potret Negara), situated in an adjoining wing of the National Visual Arts Gallery (Balai Seni Visual Negara) in Kuala Lumpur.

In many ways, Minah, regarded as the National Portrait Gallery’s “unofficial poster girl”, is a fitting reflection of the gallery’s mission statement: to tell the story of Malaysia through individuals – common and prominent – who have shaped the nation’s heritage, history and culture.

“If you are looking for Malaysian social history, this is a good place to start,” said Amerrudin Ahmad, the National Visual Arts Gallery’s main curator behind this portrait gallery project.

“As a country, we have a rich history when it comes to portraiture ... and the National Visual Arts Gallery also has a sizeable inventory of portraits from several generations of local artists. With the arrival of the National Portrait Gallery, the public now has a space dedicated to the exhibition and study of portraits,” he added.

The National Visual Arts Gallery is the custodian of over 500 portraiture works in its permanent collection.

A team of curators was assembled last year to make this portrait-based annexe a reality, with funding approved by the National Visual Arts Development Board Act 2011.

“We wanted to introduce something of a guide to the culture of portraiture – to bring to light the early pioneers, a sampling of the pioneering styles as well as to have a platform to exhibit new and diverse directions in portrait work. At present, we have historic pieces from the (British) colonial times, pre-WWII portraits, pre-Merdeka work and significant paintings from the 1960s/70s sitting alongside some 30 pieces of recently commissioned portraits at the gallery now,” said Amerrudin.

At a glance, the visual database at the National Portrait Gallery offer a broad range – from oil on canvas, photography, mixed media, sculpture, resin and water colours.

The oldest portrait on display is Lukisan Che Ali, from 1885, which is a watercolour/sketch piece by British artist George Giles, while O. Don Peris’ Portrait Of My Wife In Her Wedding Dress (1933), Yong Mun Sen’s Portrait Of Artist Wife (1943) and Katherine Sim’s Salmah (1949) give colour and everyday context to the early story of the nation.

Newer work celebrating the inner life of prominent Malaysians – past and present – have also given the exhibition a sense of approachability. Kow Leong Kiang’s Hijjas Kasturi, a vibrant piece on famed architect, Amron Omar’s Tun Salleh Ismael, a personable tribute to the legendary Malaysian IGP, and Amri Ginang’s striking photography work Prof Ungku Aziz, are just some of the eye-catching highlights.

Amri Ginang's Prof Ungku Aziz (2012), a black and white photograph on canvas, is one of the illuminating highlights at the National Portrait Gallery.

According to Bakhtiar Naim Jaafar, an assistant curator at the National Visual Arts Gallery, the influence of Hoessein Enas and Angkatan Pelukis Semenanjung (APS, the Peninsular Artists Force) in the development of portraiture in the country cannot be discounted.

“To the common person, portrait work might just be something associated with (commercial) artists at Central Market (in Kuala Lumpur). But this art form had a starting point and thrived with the pioneers who made it such an important part of Malaysian art history. If you want to dig deeper and find out how portrait styles came into prominence, just have a look at Hoessein Enas’ work in the gallery. Then move on to the other pioneers. Each generation has its own narrative ... with a Malaysian story to tell,” said Bakhtiar. 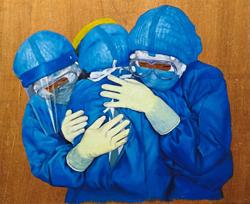