Bucky was rebuilt physically and mentally, gaining a bionic arm and turning into a Russian assassin.

What's a superhero sidekick got to do to get some attention in the comic book universe? Ditch your heroic past and go Russian assassin crazy.

There was a time when the only “certain” deaths in comics applied to Uncle Ben, Thomas and Martha Wayne, and Captain America’s young sidekick Bucky. However, Ed Brubaker dismissed that notion by bringing Bucky back via what is arguably the best comic resurrection to date.

The Man of Steel had his “solar cells” recharged; the Dark Knight’s “worse than death” fate turned out to be a time-travel escapade; Peter Parker’s Waterloo was merely on the mental plane; and Johnny Storm had his flames extinguished in the Negative Zone – we've endured such feeble excuses in the past, just for the sake of a milestone issue to welcome our heroes back from the dead.

Today’s subject matter, Bucky Barnes aka The Winter Soldier, is an anomaly in the resurrection game. His “death” actually served a higher purpose, underlining the reason why heroes, particularly super-powered ones, shouldn't have “powerless” teens as their sidekicks. However, his achievements have always been second to Cap’s, and the only reasons for bringing him back to life seemed to be nostalgic ones, providing Cap with an emotional reunion.

Here’s where Brubaker and artist Steve Epting proved the comics fraternity wrong, as their five-year stint on Captain America not only reinvented Bucky, but actually made him a better Cap than Steve Rogers – seriously! With the release of Captain America: The Winter Soldier, the boy once known as Bucky will be sharing the limelight with the Star-Spangled Avenger. In conjunction with the movie’s release this week, we look back at Bucky’s contributions to the Marvel Universe and why he's worthy of wielding the shield.

James Buchanan “Bucky” Barnes made his debut as Cap’s sidekick in 1941’s Captain America Comics #1, courtesy of Joe Simon and Jack “The King” Kirby. Named after the 15th US President and Simon’s childhood friend, Bucky was initially the mascot of US Army Camp Lehigh. A chance encounter with Private Steven Rogers gave him a bigger purpose in life and WWII, playing an instrumental role in thwarting Hitler’s and the Red Skull’s plans for world domination. All you need to do to become a superhero’s sidekick is to walk in on him when he’s changing.

Had Bucky not accidentally walked in on Rogers changing into his Captain America uniform, he wouldn't have stamped his mark as Cap’s sidekick, as a member of the Invaders, and most importantly, he wouldn't have “died” in that tragic drone plane incident that left Cap in suspended animation.

Not all sidekicks are as fortunate as Dick Grayson, who spent decades as Batman’s first Robin before going solo as Nightwing. Bucky never had such an opportunity. He was mostly confined to a supporting role, a utility player who did all the behind-the-scenes work, whether it was with Captain America or within the confines of a team such as the Invaders, Young Allies and Kid Commandos. Therefore, it’s no surprise that his final moment with Captain America remains his most memorable contribution.

During the closing days of WWII, the duo went up against Baron Zemo, who launched an experimental drone plane with a bomb on board. Although our heroes succeed in boarding the plane, Bucky couldn't defuse the bomb, and supposedly died on the plane when it exploded in mid-air. The explosion hurled Captain America into the freezing waters of the North Pole, where the Avengers discovered him decades later (in Avengers Vol 1 #4).

Note: Movie fans might feel a bit of a disconnect here – in Captain America: The First Avenger, Bucky fell off a train instead of a plane, and fought Red Skull instead of Baron Zemo.

So what is it about Bucky’s resurrection that made it more acceptable than others? The loophole is that they never found his body after that mid-air explosion. True, the blast should have vapourised his body, and Bucky’s appearance among the Legion of the Unliving in Avengers Annual #15 seemed to confirm that he was as dead as a doornail. But the fact that they never found his body made it easy for writers to come up with new theories on how he survived. 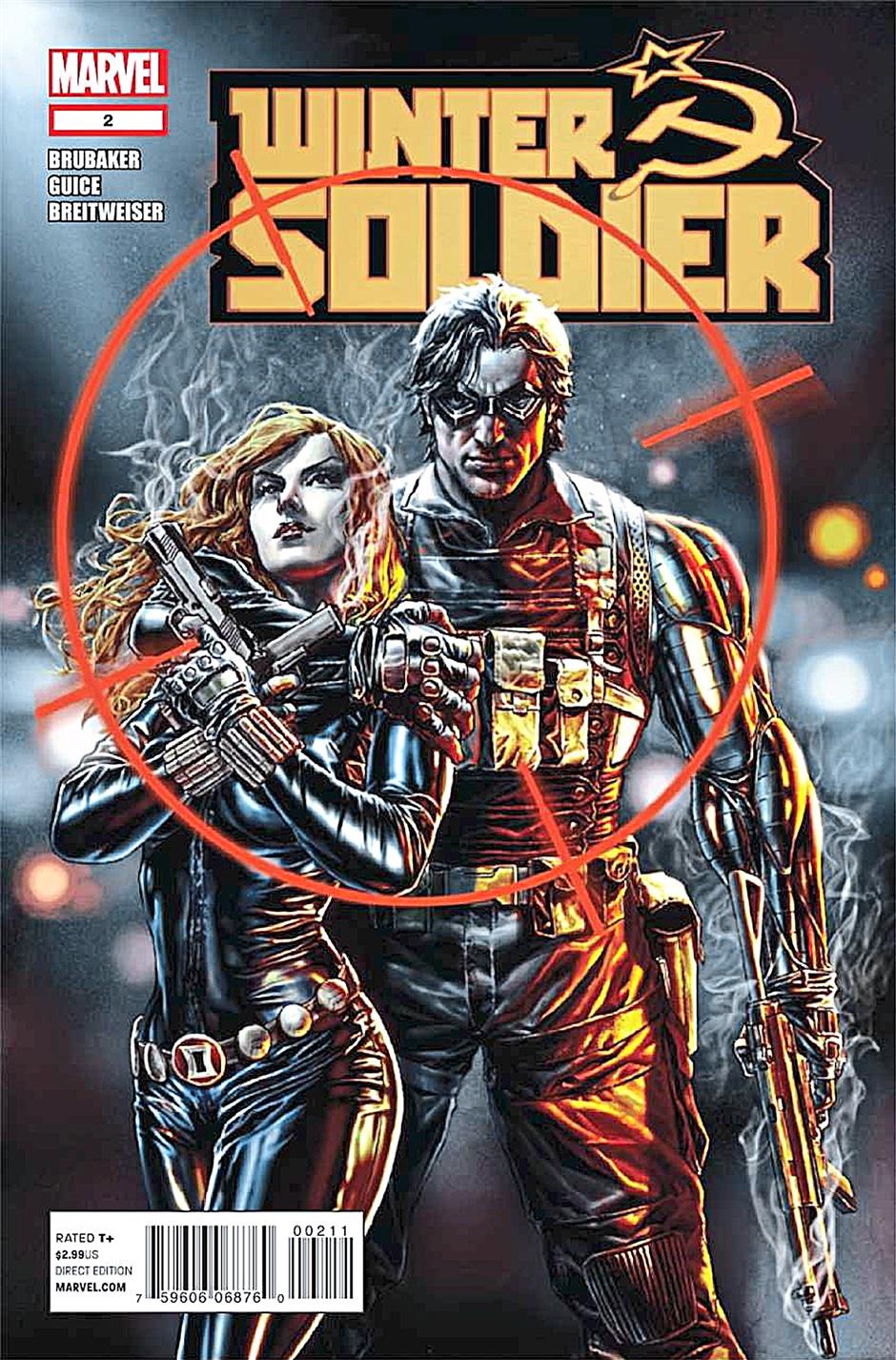 Winter Soldier and Natasha Romanov shared more than missions during their time as Russian agents.

Brubaker’s 2005 run on Captain America offered the theory that Bucky suffered the same icy fate as Captain America. Instead of the Avengers, it was the Russians who found him instead. Not only did the explosion take Bucky’s left arm, it also left him in an amnesiac state.

Under the supervision of General Vasily Karpov, Bucky was rebuilt both physically – gaining a bionic arm – and mentally, as the Russians “reprogrammed” him into a Soviet assassin, codenamed The Winter Soldier. Kept under wraps in Department X, the Russians used him sparingly for covert missions such as high-profile assassinations. “Sparingly” is the keyword here. Bucky was kept in cryogenic stasis during his “off days”, which also preserved his youth, which explains why he’s aged so little since WWII.

His amnesiac state didn't hinder his natural fighting abilities at all, but the gradual exposure to the missions made him more ruthless in his actions. Eventually, this takes a toll on his mind, which results in Bucky suffering a breakdown during a mission in the US and going MIA.

Now that we've established that Bucky never died in WWII and served as a Russian assassin since the 1960s, let’s take a look at just how much retconning Marvel has done to give the Winter Soldier more depth.

Apart from being a “sleeper” agent, he also helped in training a young Natasha Romanov aka the Black Widow. The two shared more than spy games, and were actually in a hushed-up relationship, before Natasha married the Red Guardian. While this explains his present comic-based connection with the Widow, his contribution to two major milestones in Wolverine’s history goes beyond far-fetched.

Not only did the Winter Soldier aid Logan during his escape from the Weapon X facility, he was the one who murdered Wolverine’s wife Itsu and unborn son Daken – another character who was miraculously resurrected later. While having links with Wolverine usually helps to amplify a character’s depth, Logan’s connection with a WWII veteran like Bucky just doesn’t sync well.

Obviously, the hype surrounding the Winter Soldier owes a lot to his creator Brubaker’s brilliance, elevating him from “exemplary sidekick” to “enigmatic anti-hero”. Created to be a sidekick, Bucky was consigned to play bit parts and live with being powerless, while Rogers did all the heavy lifting. This was certainly the case during the Golden and Silver Age, as well as in the character’s subsequent incarnations. After the ‘death’ of Steve Rogers, Bucky took up the mantle of Captain America and packed a gun.

However, Brubaker injected some substance into the character’s history by revealing that his sidekick status was actually a cover-up, and that the US military had bigger plans for him, including black ops stuff that Cap wouldn't have the stomach for. Brubaker introduced the revitalised Bucky in 2005’s Captain America #1, in which the Winter Soldier seemingly kills the Red Skull before offing Jack Monroe (Nomad) a few issues later.

Operating under the instructions of ex-Soviet general Aleksander Lukin (Karpov’s protégé), the Winter Soldier’s trail of destruction included detonating a fire bomb in Philadelphia and killing hundreds, kidnapping Sharon Carter, and retrieving the Cosmic Cube for Lukin. All this led to a memorable reunion-cum-showdown with Cap, which eventually set the Winter Soldier on the road to rehabilitation.

Obviously, Cap’s persistence in saving his former protégé played a big part in the Winter Soldier’s quest for redemption. Cap achieved it by using the Cosmic Cube, which helped Bucky regain his memories and filled him with guilt for his past misdemeanours.

With the long arm of both the American and Russian law catching up with Bucky, it was Rogers’ untimely “death” (Captain America #25) that paved the way for Bucky’s full-scale return to the heroic ranks. In Rogers’ absence, Bucky wielded the shield for a good three years, and even played an instrumental role in the Avengers during the Secret Invasion and Siege events.

With both his US and Russian military training, enhanced by Cap’s tutelage, Bucky would be almost as good as Rogers, if not for the latter’s Super Soldier serum. The one edge Bucky has over his mentor is the superhuman strength derived from his cybernetic arm and his anti-hero nature. His past life working for the other side clearly differentiates Bucky from Rogers, especially when he took over as Captain America. His Cap was grittier, wearing a new costume, and pairing the iconic shield with a gun.

When Rogers himself came back from the dead in Captain America Reborn, it was only fitting that the original Cap be reinstated. Although Rogers was willing to let Bucky continue in the role, Bucky's lack of leadership ability was clearly evident during the Fear Itself event. Critically wounded, Bucky was saved only by Nick Fury’s timely intervention which also gave him the opportunity to rebuild his career.

Faking his death – again – Bucky returned the mantle of Captain America to Rogers and resumed his role as the Winter Soldier, which he still maintains in the current Marvel timeline. 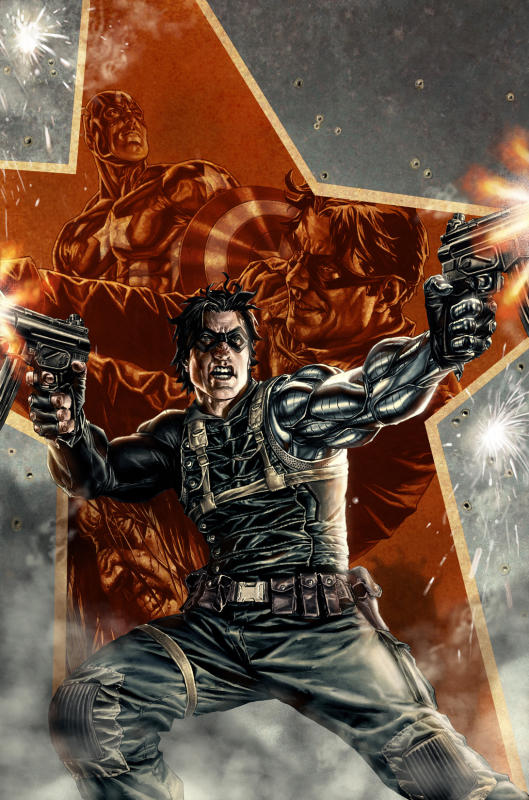