There was a mini-mob in one of New York City’s upscale department stores when four superbabes appeared to promote a scent that is supposed to speak of beauty at every age.

Four of the world’s most sensuous females were gathered under the same roof one summer evening in New York City.

“You’re pushing me!” one woman said. 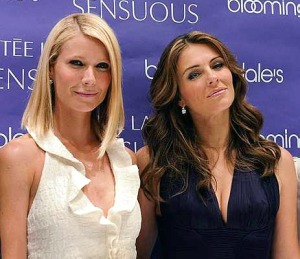 No, the four foxy women were not having a cat-fight. In fact, Gwyneth Paltrow, Elizabeth Hurley, Carolyn Murphy and Hilary Rhoda were gracious and charming when they turned up together at Bloomingdale’s on July 8. They smiled and posed for pictures, and during the autograph session, they were seen chatting with one another.

“You are the definition of sensuous,” Paltrow told Hurley.

A day after the event, bloggers were swooning about the women, saying Paltrow looked stunning in a ruffled Giambattista Valli dress while Hurley dazzled in her Versace.

Their joint appearance caused a frenzy among gawkers, press photographers and fans. There was pushing and shoving, all for a glimpse of beauty.

One woman climbed on top of a cosmetic counter for a better picture of the fabulous four. Another one was hoisted up by her female friend, who clearly had strong arms

“Folks, could you move aside please?” one staff kept repeating in vain. He needed to ensure a clear path for bona fide customers of the store.

Earlier promotion of the event was captivating, indeed — “Four of the world’s most sensuous women are making their only US appearance together at Bloomingdale’s,” according to a press statement.

As “spokesmodels” of Estée Lauder, the four were in town to introduce its latest fragrance called, well, “Sensuous”.

Customers who bought the new scent were allowed to seek the signatures of the foursome.

“Sensuous marks the first time all four models have been photographed for the same Estée Lauder fragrance campaign,” a press statement said.

The women are supposed to represent sensuality in women in their 20s, 30s and 40s.

These beauties were featured, with Paltrow on the cover, in the July issue of Harper’s Bazaar, which itself became the subject of a story in The New York Times style section on June 29 because of the magazine’s unprecedented way of devoting 40 editorial pages to a perfume campaign.

The new fragrance is described by Estée Lauder as warm and inviting, bringing out the most feminine side of a woman.

“The rich core of molten woods and amber is surrounded by atmospheric florals and warmed by a hint of pepper and a touch of honey.”

“I’m going to give the perfume to my mother. It’s too strong for me,” said Melika Ambrosir, who queued up for 45 minutes to get the signatures of the four women on the perfume box.

Ambrosir, who works in the human resources department of a life insurance company, named Paltrow as her favourite among the four.

“She has glowing skin. And she was very nice, asking people how they were.”

In a statement from Estée Lauder, senior vice president of corporate fragrance development worldwide Karyn Khoury said she had always been inspired by the Maya Angelou poem titled Phenomenal Women.

“This inspiration and the vision of confident, modern yet timeless femininity which it brought to mind helped me work with the perfumers to fuse the science and the magic of perfumery,” she said.

Then again, beauty is rather fleeting at times. The four superbabes arrived at Bloomingdale’s at 6.26pm to cheers and whistles from the crowd.