Transforming the ashes of loved ones into diamonds is becoming an international trend.

AT the end of their days, most people end up six feet under or up in flames, others get frozen or mummified.

But some lucky ones are spending eternity as sparkling diamonds, thanks to a peculiar chemical transformation.

For a fee, a company called Algordanza in the eastern Swiss canton of Graubuenden offers a service to turn ashes into precious stones.

Every month, it gets 40 to 50 commissions – from some as far away as Japan.

One came from secretary Lilly Hess-Sollberger, who saw an article about the service and made her daughter Michele Galmarini-Hess promise to call Albordanza when she passed away.

Eternal sparkle: Instead of ending up in the ground or in an urn after death, somepeople are being chemically transformed into diamonds by Swiss company Algordanza.

She died three years ago at 82 and her ashes are now a half-carat blue diamond pendant that adorns her daughter’s neck.

“I wear it day and night, even when I go to bed. For me, she’s alive, and it does me good,” said Galmarini-Hess who lives in Montreux.

When asked about the diamond, she said some have shuddered but most people find it a “great” idea. “You can’t imagine how many of them ask if they can kiss the stone,” she said.

Rinaldo Willy, 28, one of two co-founders of Algordanza, said the commissions come from “all kinds of people – they could be bus drivers or professors in philosophy.”

At the firm’s laboratory, about 15 machines run non-stop alongside employees wearing plastic protective glasses who work behind a yellow and black line that visitors are not allowed to cross – out of respect for the dead.

Willy said 500g of ashes was enough to make a diamond while a human body leaves behind on average 2.5kg to 3kg of ashes.

Potassium and calcium, which makes up some 85% of the ashes, are first separated from the carbon.

The carbon is then subject to extremely high pressure and heat at 1,700°C, a process which compresses it into graphite, a carbon allotrope or a structurally different form of carbon.

More pressure and heat are applied to the graphite to turn it into diamonds – the hardest allotrope of carbon.

The entire process takes six to eight weeks, hardly a fraction of the time it takes for the formation of natural diamonds which take thousands of years.

When the process is complete, the crude diamond still requires polishing and cutting. Many are cut into heart-shaped stones which can be worn as a pendant or mounted on a ring. 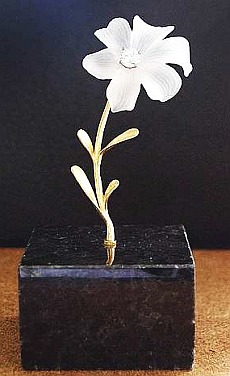 A floral composition with a diamond madefrom ashes.

“Each diamond is unique, the colour varies from dark blue to almost white,” said Willy. “It’s a reflection of the personality.”

Willy acknowledges that it is impossible to prove that each diamond is indeed made from a particular person’s ashes. “DNA burns,” he explained.

But the “chemical imprint” of the ashes, determined at its arrival to the laboratory, allows for documentation to be made and for the finished product to be traced, he said.

Algordanza, which means “remembrance” in Romansch, one of the four official languages in Switzerland, defends this as a reasonable price.

The industry of “human diamonds” is booming, with similar companies in Russia, Spain, Ukraine and the United States.

Founded in 2004, Algordanza has already expanded to 20 countries, including six outside Europe. Willy said it is particularly popular in Japan, which sends between two to four urns daily, and the firm is setting its sights on China and India.

Though most life gem requests come from families after a loved one’s death, Willy said people are starting to ask for his firm’s services themselves in living wills before they die.

Individuals can even pay beforehand, with an insurance policy that covers their wish to become a diamond ... forever. – AFP