Ordering in: Discovering the joys of Japanese ramen infused with interesting Chinese influences

(From left) Kwek, Phang and Yap are the brains and talent behind the aptly named FusionMan Noodle. — Photos: FUSIONMAN NOODLE

The allure of a bowl of Japanese ramen is often so intoxicating that eateries like the famed Ichiran chain in Japan (which specialises in tonkotsu ramen) regularly have long, serpentine queues trailing outside.

In Malaysia, ramen’s hold is no less powerful and denizens flock to local Japanese restaurants angling for a taste of this noodle dish that has many permutations and iterations, from tonkotsu ramen (which requires pork bones to be slow-cooked for hours to elicit maximum flavour) to Hakata ramen (tonkotsu broth with thin noodles), and Tsukemen ramen (where noodles are dipped into a separate bowl of broth).

In May last year, newly minted local restaurant FusionMan Noodle sought to go against the grain, deviating from the ramen norm in what could either be seen as a travesty or something so ingeniously good and inventive that it is immediately embraced and accepted. Thankfully, customer reactions have been very firmly in the latter category.

“FusionMan Noodle is a Japanese-based ramen shop, but we make it a bit fusion in terms of the menu, taste and ingredients,” says Jimmy Yap, a co-founder of the restaurant.

“Our chef, Phang Hui Min, actually worked in a ramen shop a few years ago and she is Hakka so she brought a little bit of the Hakka taste to the ramen, because she felt that this was ideal for people who miss the taste of their mum’s cooking,” says Yap. Yap and co-founder Zac Kwek also own and operate PapaSan Canteen, another popular eatery in the Kuala Lumpur suburb Kuchai Lama that is famed for its Japanese and Asian fusion comfort food.

Despite their credentials and Phang’s experience and wizardry with ramen, business was initially terrible for FusionMan as the restaurant opened two days before a long lockdown was imposed in KL, one which subsequently became a lengthy nationwide lockdown.

“We opened on May 5 and two days later, KL went into lockdown. So it was quite a hard time for us, because we were brand new so people didn’t know us yet. At the time, potential customers hadn’t yet had the chance to understand what kind of food we served. On top of that, we didn’t have enough lead time to explore marketing opportunities, so it was really hard,” says Yap.

Yap and his team somehow pulled through, and even though he says they are still losing money every month, things are infinitely better.

“We are still losing thousands every month, but we continue to work hard because we already started the business, so we have to give it a chance to get better. Our hope is that more customers will come and dine in,” says Yap.

The heart of FusionMan’s menu is its selection of ramen, many of which are made using a broth that utilises pork bones, a concoction Phang slow cooks for 12 hours every day. The vinegar belly ramen offers a taste of the traditional Chinese dish of vinegar pork trotters couched in a rich tonkotsu ramen broth.

To truly discover the eatery’s fusion-forward noodles, definitely try the vinegar belly ramen (RM18). Here, you will discover ramen swimming in the eatery’s signature tonkotsu-style pork bone broth alongside a cast of characters that include corn, crispy pork lard, bak choy and a fat slice of vinegar pork belly, cut in the vein of Japanese chashu.

This is a meal of gently surprising equilibrium – the ramen is firm without being overpowering while the pork broth is milky and has porcine undulations that offer the promise of addiction.

Perhaps the mega star in this dish is the vinegar pork belly, which is reminiscent of the Chinese confinement dish of vinegar pork trotters. Here, the acerbic quality of the sweet vinegared pork offers a sharp, toothsome contrast to the meal that is very, very welcome and wholly satisfying. 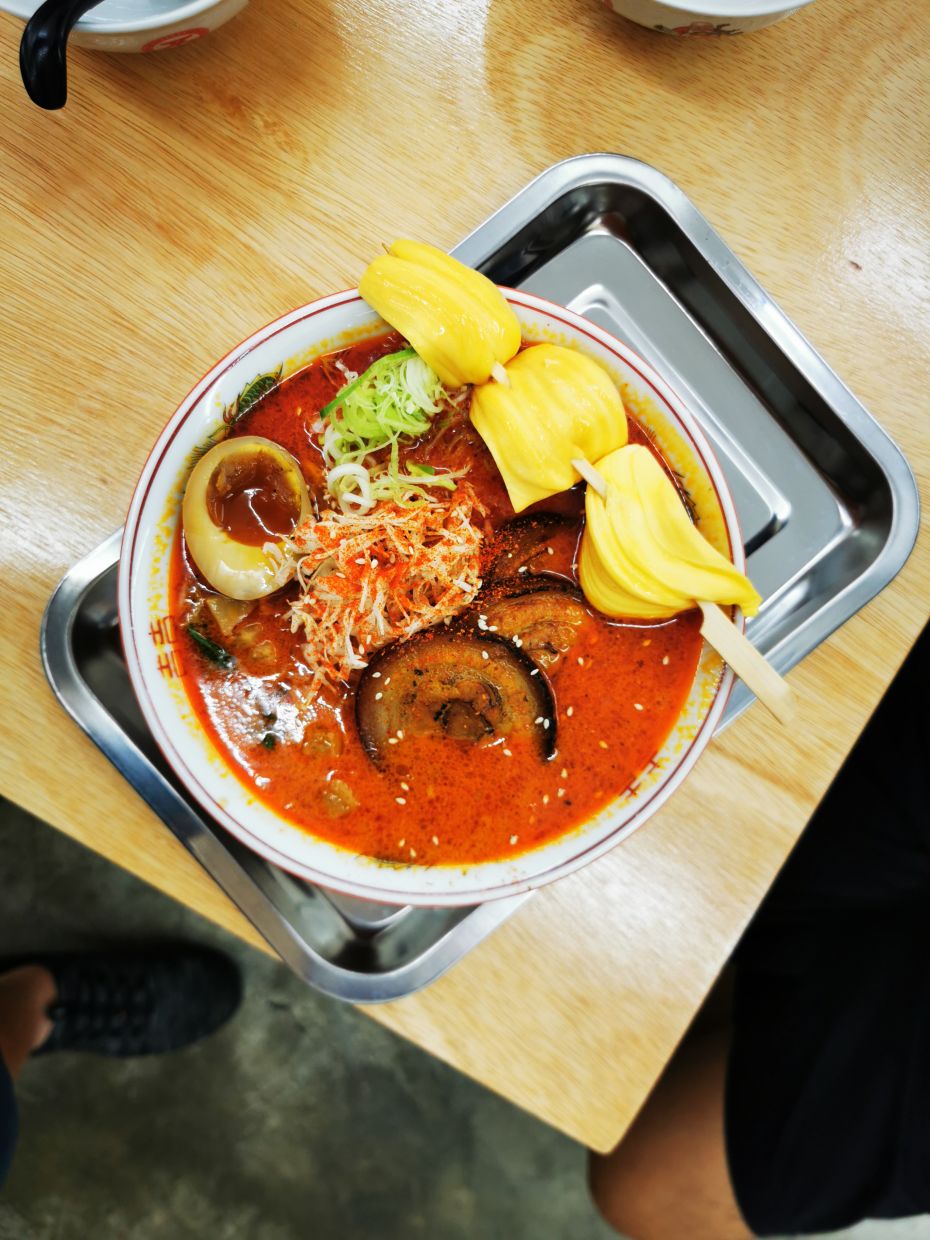 The volcano ramen is a fiery, addictive offering that is perfect for fans of spicy food.

The volcano ramen (RM22) meanwhile takes the soothing, nurturing qualities of the traditional tonkotsu ramen and turns it into a fiery, hot tornado of flavours. In this concoction, you will find ramen, chashu pork, corn, cabbage, black sesame seeds, pork lard, and half a Japanese ramen egg (ajitsuke tamago) all tossed together in a turbulent, fire-fuelled pork bone broth that is lightly thick, potently spicy and very, very good. The pork slices are also alluringly melt-in-the-mouth tender and sure to extract oohs and aahs of pleasure.

Interestingly, the meal comes with jackfruit slices, which are designed as an appeasement of sorts from all that heat, and to further fuel appetites. Even though this is a meal that could potentially see you sweating your guts out (those with more sensitive innards might suffer the consequences later), it’s the sort of addictively good stuff deserving of throwing caution to the wind, bowels be damned.

Although the eatery’s name alludes to its noodle expertise, it also has a wide range of rice bowls which are worth trying. Of these, you could opt for the kimchi pork rice bowl (RM17). Thin pork belly slices couched in the strong, sour south Korean classic dish of kimchi play a leading role in this dish, in a combination that is likely to instigate a cult following.

The eatery also has a host of side dishes, of which the chilli century egg (RM9) is a stand-out. In this dish, century egg wedges coalesce harmoniously alongside chilli and garlic in what seems deceptively simple, yet tastes wondrously good. It’s the sort of meal you can imagine eating on a daily basis the minute it touches your mouth.

Moving forward, Yap says his hope is for the eatery to become more well-known among denizens of the Klang Valley. In fact, to coax regulars and newbies, FusionMan has once-a-month promotions.

“We do these promotions to benefit our regular customers and also offer a friendly price to new customers.

“This is also because in the future, we want to serve more customers – we need more customers to build our brand and develop a good image. Once we have that solid branding, then we might think about franchising,” says Yap.

Order from FusionMan Noodle on Aliments.