It’s hard to believe that an American soft drink can be used as a cooking ingredient for a Chinese dish.

But that is what happens when you braise chicken in cola.

You get a fusion dish that brings together ingredients that are worlds apart.

Imagine the taste of a can of cola boiled down into a concentrated syrup, melded with natural chicken juices and spiced with ginger and soy sauce.

The result is a dish that was all the rage in the 1990s when a few Hong Kong restaurants popped up all over Malaysia.

The idea of using cola as a cooking ingredient is not new, and ginger boiled in cola has long been considered a cooling tonic in Hong Kong.

However, I’m sceptical of the lore of the dish’s origins where a cook in Shandong, China had inadvertently poured cola into his braised chicken.

It was probably more experimental than accidental, and that he had probably pondered how all the micro-aromatic compounds in the cola would make a unique flavour combination with chicken.

After all, the formula for cola includes, besides coca leaf extract, the oils of cinnamon, coriander, nutmeg, orange, lemon and lime juice, and caramel — ingredients that make up many Chinese dishes.

You must be aware that there is generally 10g of sugar in every 100ml of cola, so there’s quite a lot of calories from the two cups that is being used in this braise.

Although several websites advocate it, I hesitate to recommend light or sugar-free cola because the artificial sweetener, aspartame, may break down when heated and may not be suitable for cooking.

The most basic spice that you need for this dish is ginger and soy sauce.

The other ingredients such as onion, garlic and spring onion add another flavour dimension, but may be omitted if unavailable.

Other variations include the addition of cinnamon, ketchup, barbecue sauce and even dried chillies.

But if you wish to keep the dish child-friendly, then it is advisable not to make it spicy.

Although you may use any part of the chicken for this dish, the wing is the usual cut — most likely because of the ratio of meat and skin to bone that allows enough collagen to be released from the chicken to turn the gravy into a nice glossy glaze.

Whichever cut you choose, be sure to sear the meat and skin in the pan before braising because not only does this step add flavour, it also tightens the skin so the meat does not fall apart during the braise.

Try to reduce the liquid until it is just a thick and sticky glaze rather than a gravy.

The meat should remain moist and almost fall off the bone.

2 stalks spring onion, dice and separate into greens and whites

Cut each chicken wing into three pieces at its joints.

Heat oil in a frying pan.

Add chicken to sear until lightly browned on all sides, then remove chicken from pan.

In the remaining oil, saute ginger, onion, spring onion whites and garlic until fragrant, then add cola, soy sauce and dark soy sauce and bring to a boil.

Return chicken to the pan and turn down to a medium simmer, braising the chicken until the sauce is reduced into a thick and sticky glaze.

Serve immediately with a garnish of spring onion greens and coriander. 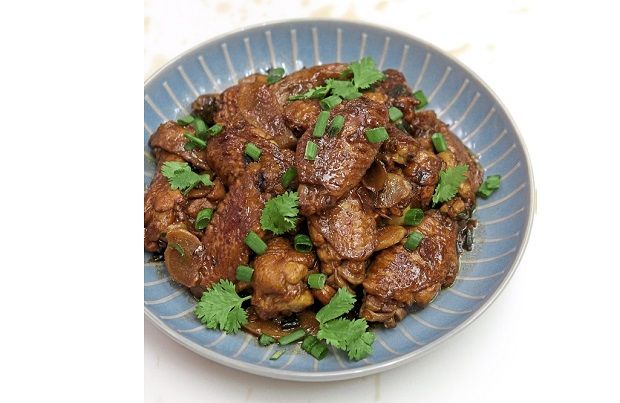 Soy sauce and ginger are essential while other ingredients lend a supporting role to this cola and chicken dish. — Photos: YAP CHEE HONG/The Star

Besides ginger, which is essential to this dish, onions, spring onion and garlic may be added for extra dimension of flavour.

After the browned chicken is returned to the pot, deglaze with soy sauce, dark soy sauce and cola.