Ordering in: The only restaurant in Malaysia to feature the food of the oldest Peranakans of the land Kerisik kulit timun is an unusual dish unique to the Chetti community that utilises the skin of cucumbers. — ABIRAMI DURAI/The Star

The word “Peranakan” literally means “child of the land” and is often used to describe the descendants of traders/travellers from other lands who married local women and formed their own unique communities in Malaysia and Singapore.

While the Peranakan Chinese are the most visible and well-known community to have emerged from these inter-marriages, what is surprisingly little known is the fact that the first and oldest Peranakan community in Malaysia is made up of the Chettis in Melaka, sometimes also called Peranakan Indians.

The Chettis can trace their roots back to the 15th century when South Indian traders arrived in Melaka, married local women and settled down here. Since then, they have been a permanent – albeit shrinking – facet of the Malaysian population for over 600 years. Wenila married into the Chetti community and learnt how to cook the all the traditional recipes that the Chettis have been making for generations. — Filepic

These days, the village where the Chettis originate – Kampung Chetti in Melaka is home to no more than 25 Chetti households, and the nationwide numbers are thought to be somewhere around 350. This makes the Chetti community truly in danger of being phased out entirely in a generation or two.

While this is sad, what’s even sadder is that so little is known about the community, even now.

In many ways, the best and easiest method of cultural transmission is often through food. But for so long, this hasn’t been implemented in any tangible way – in fact, the tiny Chetti community has never had a single restaurant representing their cuisine. Indeed, to savour their food, you had to be invited to a Chetti home for a meal!

This insularity means most Malaysians have unfortunately never had the opportunity to sample the food of this rarefied Peranakan community.

Thankfully, the winds of change have finally blown in with the arrival of Wen’s Kitchen, a brand-new restaurant in Melaka set up in December 2020 by Wenila Nadarajan.

Wenila married into the Chetti community over a decade ago, adopted all the group’s customs and practices and is one of the few Chettis still living in the historic Kampung Chetti with her children and in-laws.

Opening a Chetti restaurant was a long-held dream of Wenila and her late husband K. Nadarajan, a staunch advocate of Chetti culture, who was also the secretary of the Chetti Museum.

“I’ve had this plan for years, but could only do it now. It has been very challenging because just after we started, dine-ins were not allowed. So I had to let my staff go and now I do all the cooking myself with the help of my business partner Bert Tan,” says Wenila. The restaurant is likely the only one in Malaysia now where you can discover and savour the authentic meals and flavours of the Chetti community.

But although the eatery serves a wide range of Chetti Melaka staples, it isn’t dedicated purely to the cuisine – for a variety of reasons.

“The challenging thing is people don’t really know about Chetti food; some people don’t even know what the Chetti community is. Even in Melaka, people always mistake Chettis for Chettiars (another south-Indian sub-group) and some people think we are from Chettinad in India.

“I have had so many people asking me if I serve thosai and this curry and that curry. So my partner and I decided we should just call our food authentic Melakan food and include Nyonya staples like laksa and ayam pongteh and the Eurasian debal curry,” explains Wenila.

Still, there are enough Chetti dishes on the menu to give you a wider perspective of the community’s culinary roots.

Chetti cuisine borrows from its Indian ancestry while also taking a lot of inspiration from local flavours and produce, like coconut milk (a firm favourite), lemongrass and belacan, paving the way for the creation of a singularly unique hybrid cuisine, devised primarily by the matriarchs of the community. Sambal telur belimbing is made up of the roe of ikan parang. Although other fish roe can be used, this will make the texture of the dish less appealing. — ABIRAMI DURAI/The Star

To begin with, you could opt to try the sambal telur belimbing (RM32), a fiery, thick gravy fashioned out of the roe of ikan parang (wolf herring) and interspersed with belimbing buluh and dried prawns. This is a sumptuous, satisfying 100% Chetti dish that gently undulates with the flavours of the sea, with bursts of fish roe enveloped in each mouthful.

Another sure-fire winner is the kerisik kulit timun (RM7), which is similar to a kerabu (Malay-style salad) fashioned out of cucumber skin, chillies, dried prawns, grated coconut and belimbing buluh.

The meal is very visually appealing and has the same allure on the palate. The julienned cucumber skin co-mingles amiably with the other ingredients in a textural journey where crunchiness dominates every bite. This is a light, fresh perk-me-up that dextrously balances tropical undertones with fresh, zesty overtures.

“This is very unique, I have never seen any other Peranakan community using cucumber skin, so I think it is specific to the Chetti community – we even serve it for ancestor prayers. I think the dish came about because our ancestors didn’t want to waste anything, even cucumber skin!” says Wenila, laughing.

Next up, have a go at the lauk aram jada (also called lauk campur-campur), priced at RM20, which is essentially a coconut-milk rich curry loaded with vegetables like long beans, brinjals, bitter gourd and radish. This is a rich, extremely pleasant meal underscored by the punchy flavours of the belacan in it. 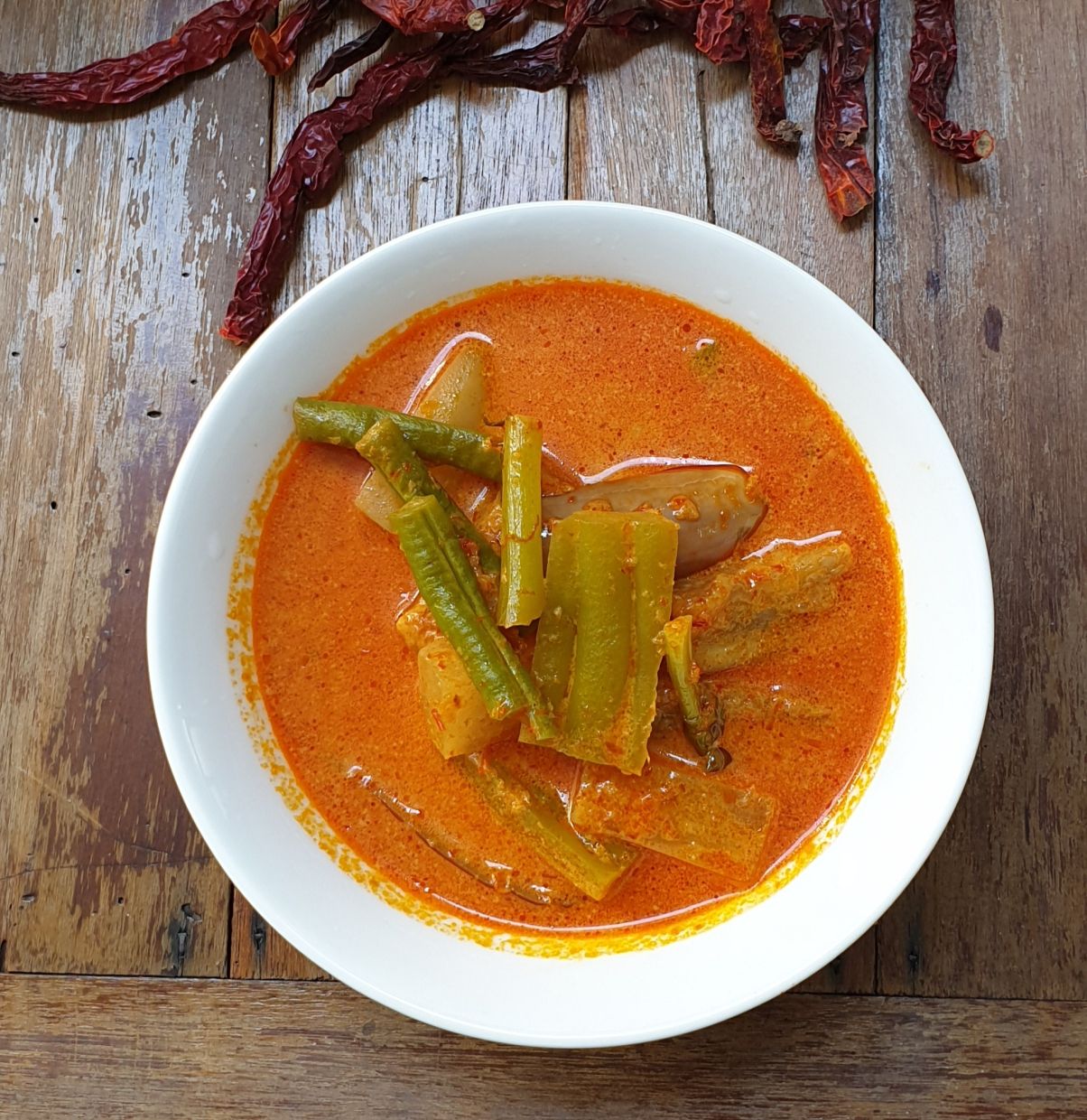 Lauk aram jada is an old Chetti dish that is so termed because it incorporates a variety of vegetables like long beans, brinjal and bittergourd. — MELISSA CHAN

The pindang ikan parang (RM35) is another authentic Chetti dish that Wenila says is an evergreen favourite among the community. The dish features a spice paste that is boiled (pindangs are often boiled, as opposed to slow-fried) and has opulent coconut milk notes laced throughout. The fish in this mixture is quite bony, so be prepared for a bit of a fish bone scavenger hunt.

Moving forward, Wenila says her goal is to educate more people about the intricacies of Chetti cuisine, starting with the people who come to her and Tan’s restaurant.

“So far, Chetti food has never been showcased before. So my intention is to let as many people as possible know more about Chetti food, because it is really unique and different,” she says.

Delivery of meals from Wen’s Kitchen is available on FoodPanda in Melaka and every fortnight in the Klang Valley through The Bendahari Markets on Instagram (@thebendahari_markets).