MALAYSIANS have high beef consumption per capita, which is no wonder then that quality plays an important role when it comes to choosing the best.

In Malaysia, food safety and halal compliance are two important factors when it comes to beef purchasing among consumers.

Australian agriculture counsellor Sanjay Boothalingam, who is attached to the Australian High Commission, said Australian red meat was highly sought after because of its quality and stringent adherence to halal compliance.

“Australia has plenty of vast open spaces that are suited for red meat production and almost 70% of what is produced gets exported.

“This also means that there is a good production system in place to suit different markets, including Malaysia,” he said during the True Aussie Beef Up webinar.

The webinar was organised by the Meat and Livestock Australia (MLA), the red meat industry’s research, development and marketing body.

Sanjay added that Australian red meat, including beef and lamb, had a prominent global reputation as a supplier of clean, safe and natural products.

Meanwhile, MLA Malaysia representative Rose Yong said that according to the MLA Global Consumer Tracker Malaysia 2020, Malaysia has comparatively high per capita beef consumption of about 7kg per person a year, against the average of 5.4kg in the region.

She said Australia was the second largest beef supplier to Malaysia, with a market share of approximately 12%.

It is also the biggest supplier of chilled beef, accounting for almost 90% of the country’s chilled beef imports.

“Australian beef is the favourite meat for many Malaysian families, especially among those with middle to high-income, with 40% of affluent Malaysians indicating Australian beef would be the first choice for their next beef purchase,” Yong said during the session.

In conjunction with the webinar, participants also enjoyed a luncheon delivered to their doorsteps, featuring True Aussie Beef and Lamb.

True Aussie red meats are naturally rich in protein and low in sodium.

It can be enjoyed in different meat cuts and in a variety of cooking styles.

During the session, participants picked up tips on how to cook different cuts of beef during a virtual cooking demonstration by chef Victor Chow, while consultant dietitian Mary Easaw spoke on benefits of eating red meats.

Customers of Aussie beef also stand a chance to win special prizes the next time they make a purchase with the Great Aussie Beef Escape contest.

Those who buy Aussie beef at retail outlets or supermarkets may win True Aussie Beef toolkits and kitchen items such as air fryers, pans and knives.

All they need to do is buy chilled Aussie beef, cook a steak or beef dish, take a photo and share it with three people.

They must also submit the photo to MLA for judging.

The contest takes place from mid-July to end-August and the details for it are being finalised.

True Aussie beef is available at all major supermarkets and hypermarkets in Malaysia. 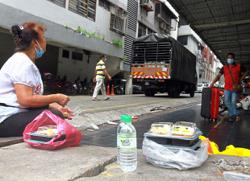