Naturally, it was the dessert served during His Majesty’s installation banquet at Istana Negara.

This sweet treat comes from Pahang where it was originally served to the royal family at their palace in Pekan. 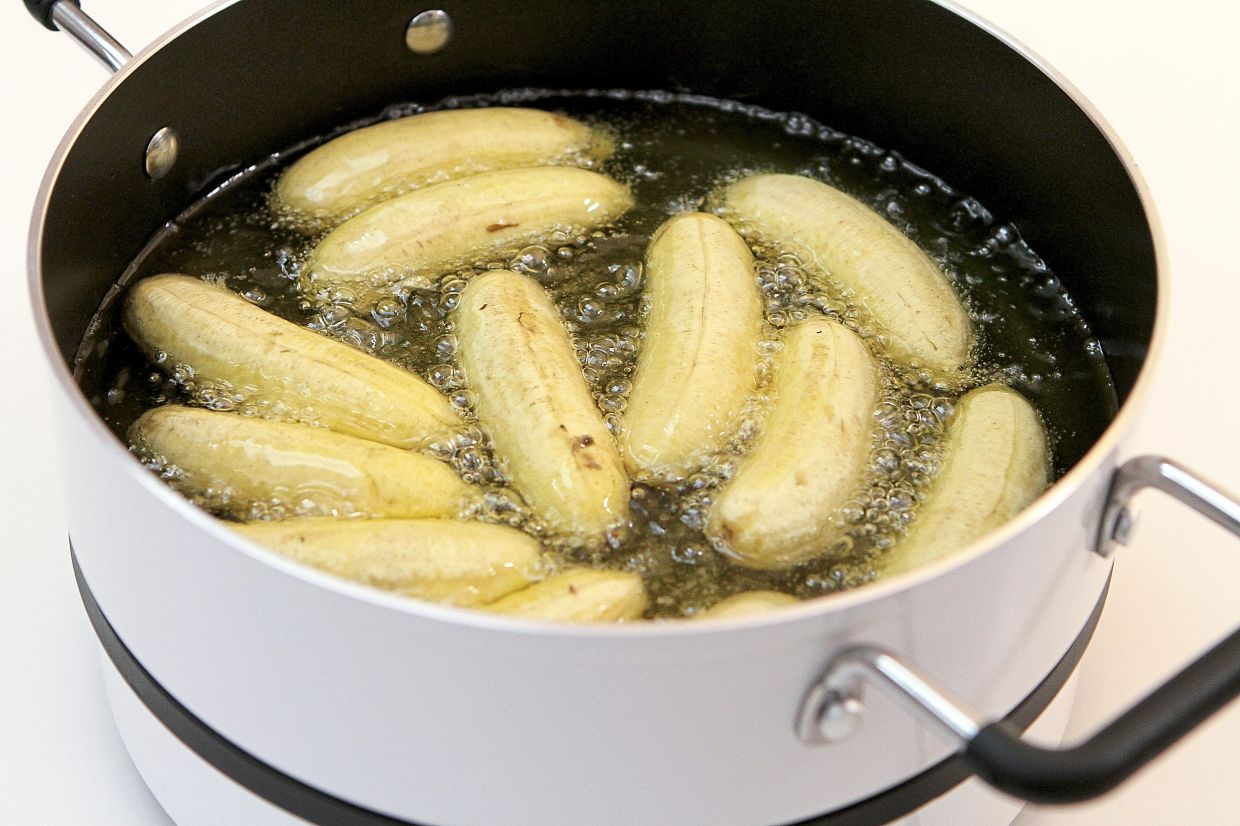 Fry bananas in oil and ghee until soft and lightly browned, then remove and pat dry with kitchen paper.

The recipe was compiled by the Queen herself in her book titled Air Tangan Tengku Puan Pahang.

The dish is traditionally served during Malay weddings and festivals as well as during Ramadan.

The main ingredient is a small, sweet local banana called pisang lemak manis, but you may substitute it with pisang emas.

Unlike many other fried banana recipes where the fruits are sliced first, this calls for the bananas to be fried whole. Be careful when lifting the bananas out of the oil because they get extremely soft and mushy when hot.

The most time-consuming component of this dish is the jala emas or golden threads.

Although these are available ready-made from many online vendors, you can determine the sweetness level and which egg to make it with if you make them yourself. 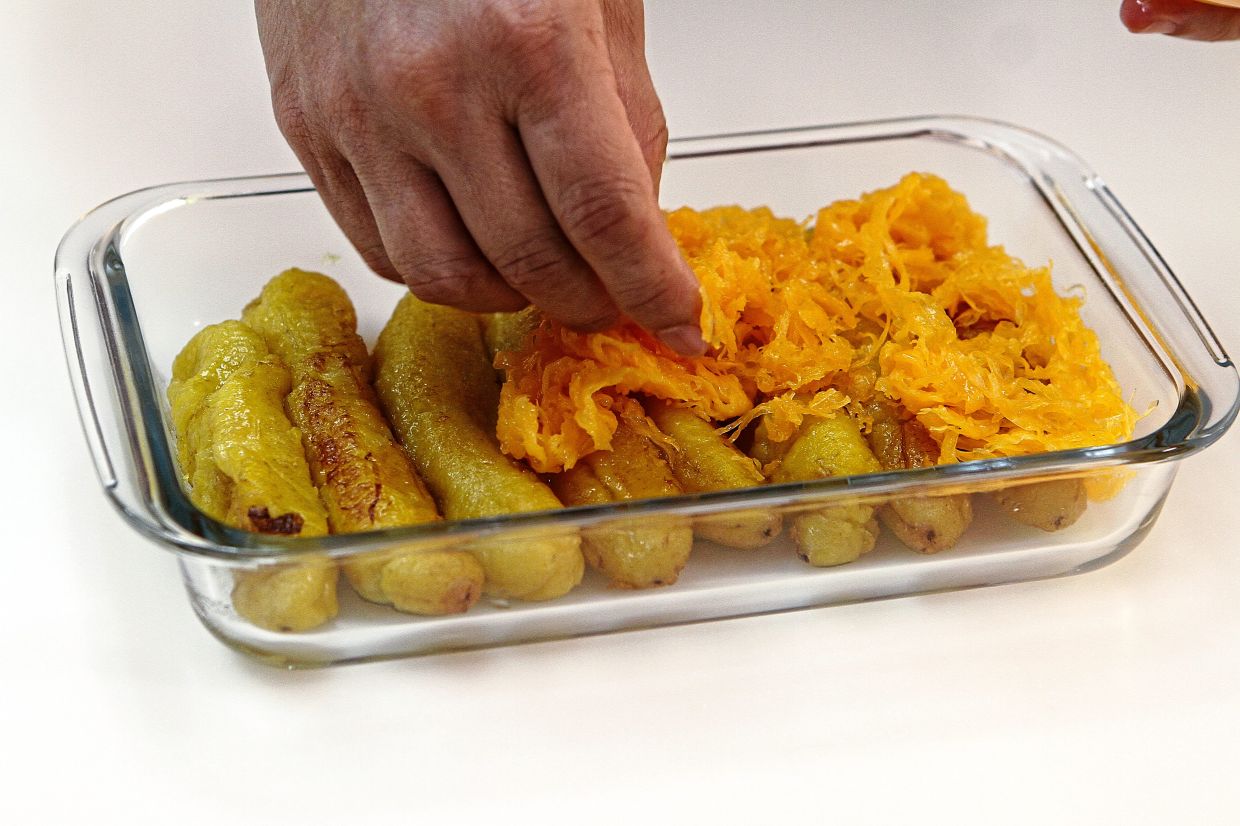 When all components have cooled, arrange caramelised bananas on the bottom of the dish and the jala emas on top.

It is recommended that you use the yolks of duck eggs but chicken egg yolks would work as well.

The only difference is the richness in the flavour that you get from duck egg yolks.

The other usual garnishes are prunes, crystallised cherries and cashew nuts.

Dates can also be added for additional sweetness, as well as walnuts and almonds.

This dish is served with a custard sauce, and there are a few variations in the recipe.

Some cookbooks call for whole eggs and a bit of water, others just use egg yolks. 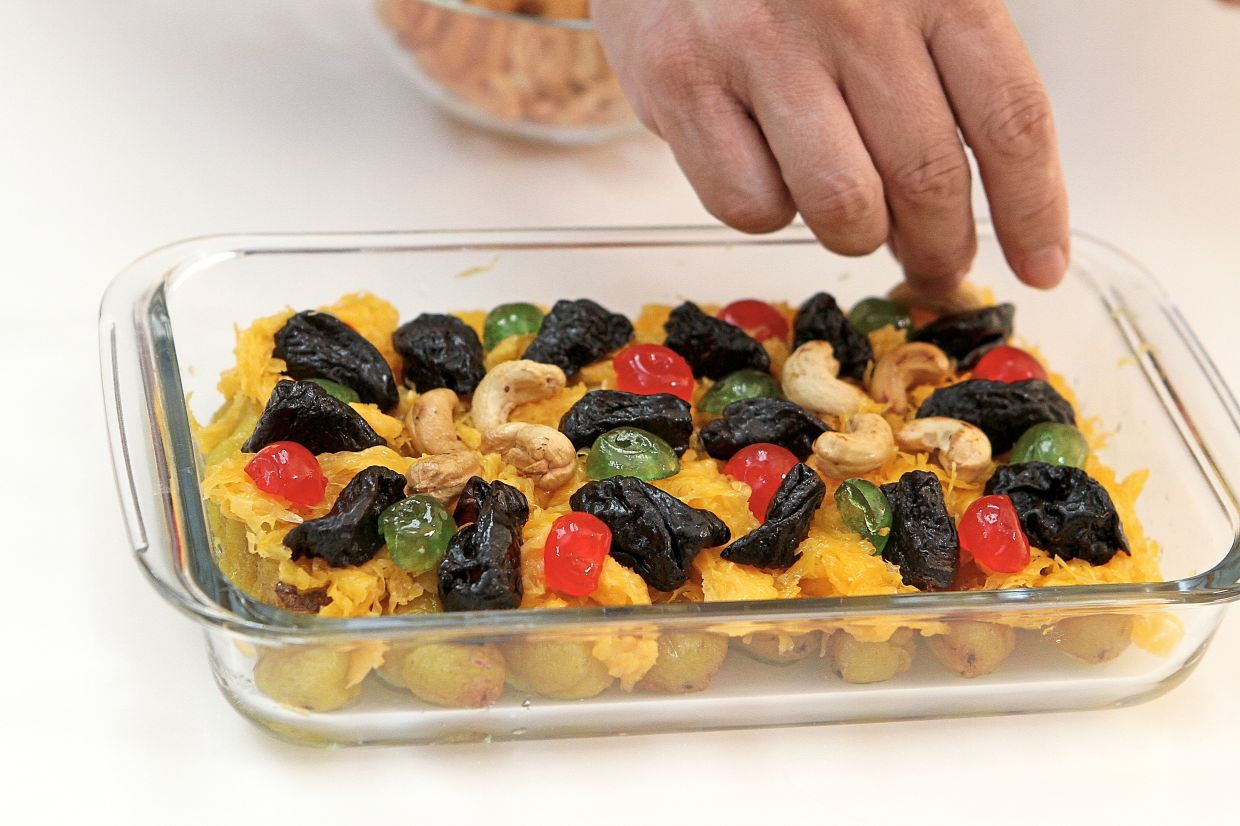 Although most would simmer the sauce directly in the saucepan, I prefer to whisk it in a double-boiler to make sure I don’t get lumps.

When it has thickened, it needs to be refrigerated for about two hours, with a lid on so that the surface does not crust over.

If it gets too stiff to pour after being chilled, just whisk in a tablespoon or two of cold water and it should flow when poured.

Serve the royal pudding cold with the custard sauce on the side or poured generously over the dessert just before serving.

Here’s wishing our Agong a happy birthday, and everyone can enjoy the holiday with a dessert fit for a king.Puding raja

For the jala emas batter, whisk egg yolks until fluffy, then strain through a wire sieve.

Fill batter into a squeeze bottle with a narrow nozzle and set aside, or if you are using a jala mould, fill only when needed.

Fill a saucepan with water, sugar and pandan leaf, and bring to a boil. Then remove pandan leaf and bring down the heat to a slow simmer.

Drizzle batter into the simmering syrup from a height to get fine strands in a circular motion starting from the outer wall of the saucepan into the centre.

Allow the strands to cook for about 30 seconds before lifting them out with a slotted ladle or chopsticks. 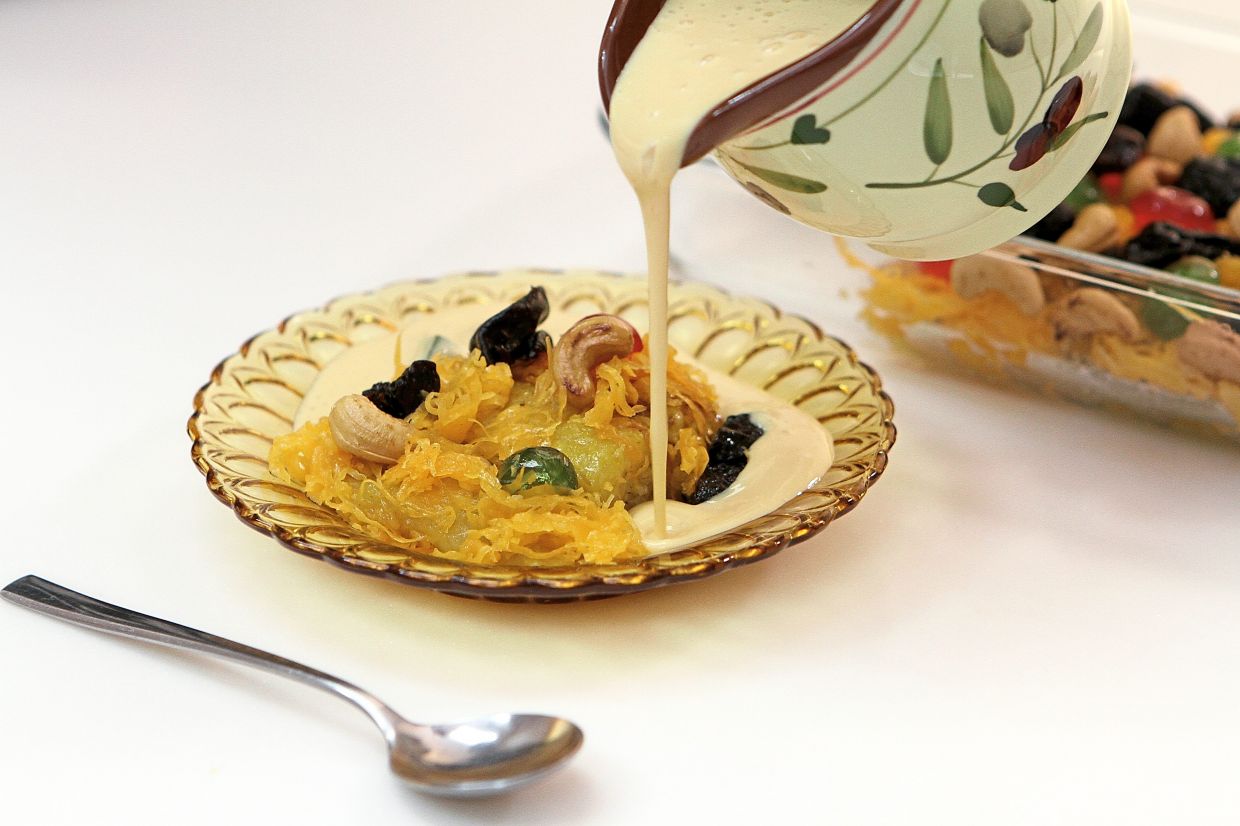 Repeat four or five times with the remaining batter.

For the caramelised bananas, heat cooking oil with butter or ghee.

When oil reaches frying temperature, add bananas in whole and fry on all sides until light golden.

For the custard sauce, whisk eggs, milk, sugar and custard powder until combined. 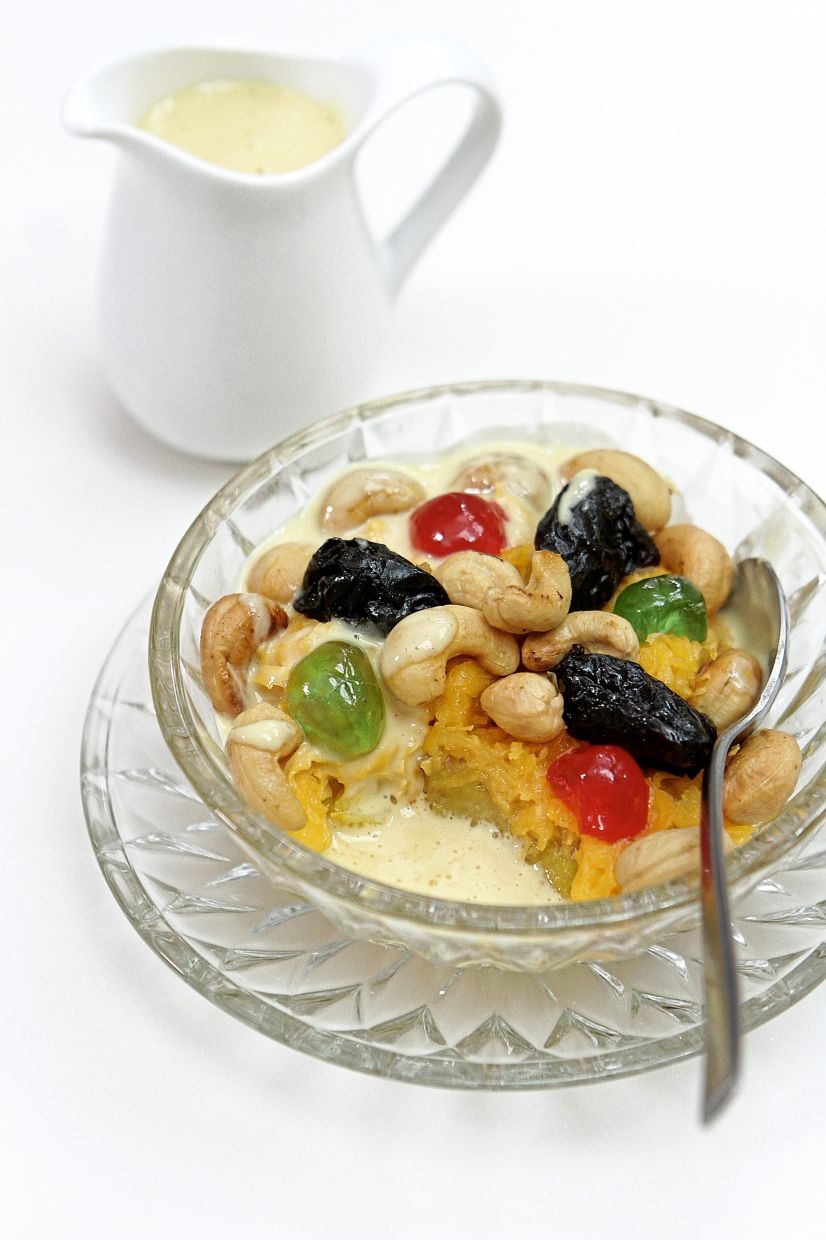 Strain through a wire sieve into a bain marie or double boiler, then add pandan leaf and turn the heat on low.

Continue whisking until the sauce starts to thicken on a low simmer, then turn off the heat.

Strain cooked custard sauce through a wire sieve, cover with a lid and keep in a chiller until needed.

To serve, arrange caramelised bananas on the bottom of the dish.

Cover bananas with a layer of jala emas, then garnish with fruit and nuts. Serve with custard sauce.