Ayu (standing fourth from left) believes in the importance of passing the heritage Johor kuih recipes she has been entrusted with to her children so that they can one day take over the making of these kuih. From left: Alicia, Alia, Alfian Raoul, Ayu, husband Azry Fazamy and Ally. - ART CHEN/Te Star

Idah Ayu Natalia Ibrahim is huddled around a small table in her colourful, quirky kitchen. Watching her movements with rapt attention are her three daughters – Alia Nurcinta, 18, Alicia Nurcinta, 16, and Ally Nurcinta, 11.

Ayu deftly folds a piece of banana leaf into a nifty looking pocket, which she then begins filling with glutinous rice. Once this endeavour is complete, she folds the leaf again, shaping it into a triangle, before securing the finished parcel with string.

While Ayu is evidently practised in the art of folding and moulding these little parcels – called lopes pulut, her children are having varying degrees of success putting their own parcels together.

“Bocor!” yells daughter Alia, bemoaning a packet that has split open. Youngest daughter Ally is struggling and stops to stare in wonder at her mother’s perfect products. “Mummy buat elok sahaja (When mummy does it, it turns out so well), ” she says, as she attempts to recreate what her mother has done. 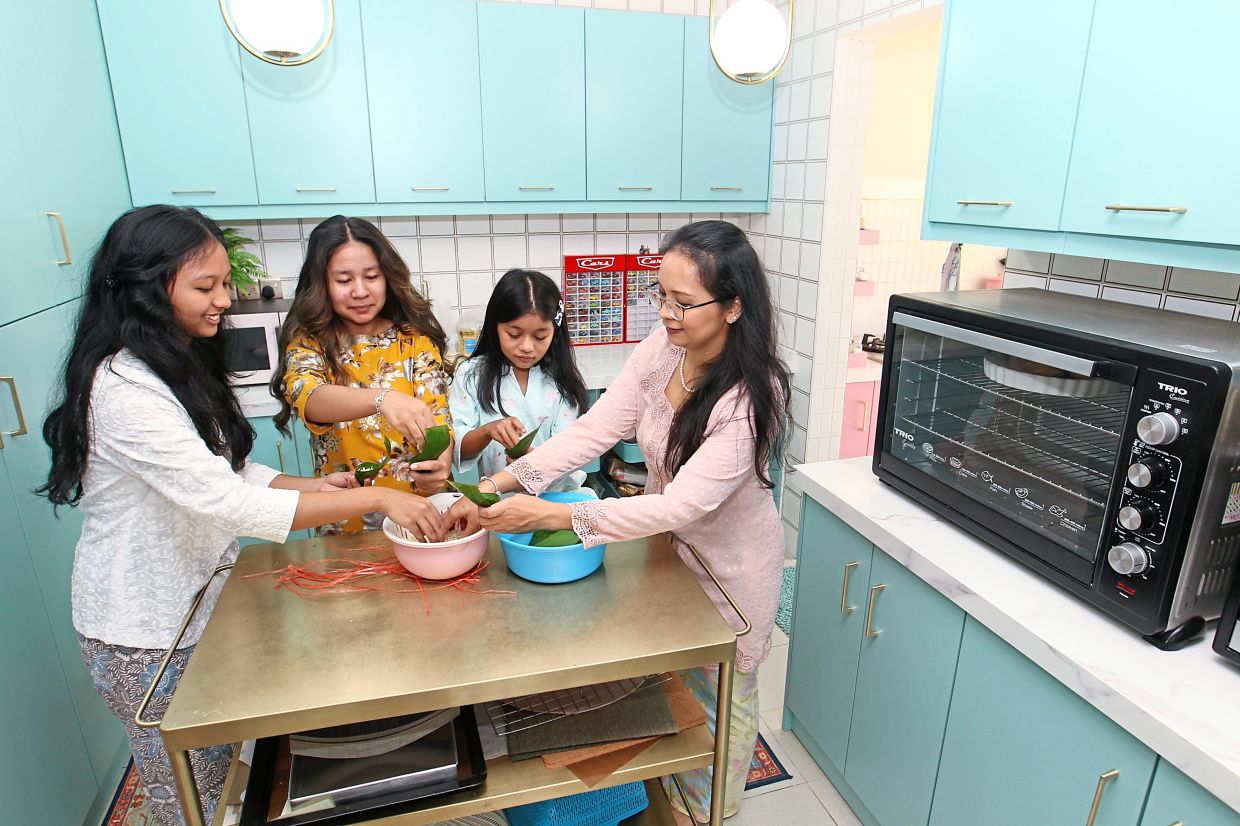 Although her children haven't quite mastered the art of lopes-making just yet, Ayu is continuing to make them learn.

Although her children haven’t quite figured out the knack behind lopes-making just yet, Ayu is determined that they persevere in making these heritage sweet treats, in the same way she grew up doing it too.

“Every Raya since I was small, I had to do simple tasks given by my mother, like shaping and wrapping lopes.

“And for my six siblings and I, Raya wasn’t just one day, it was one whole month, because my mum would have people over every day for a month. And each day, she would prepare different dishes for the guests who came to visit. It was tiring but so much fun, ” she says.

As a result, Ayu is deeply aware of the need to preserve heritage food, like the kuih she grew up with. Consequenly, she has since taken over some of the cooking and baking roles previously occupied by her mother, who is now 71 and getting increasingly tired. 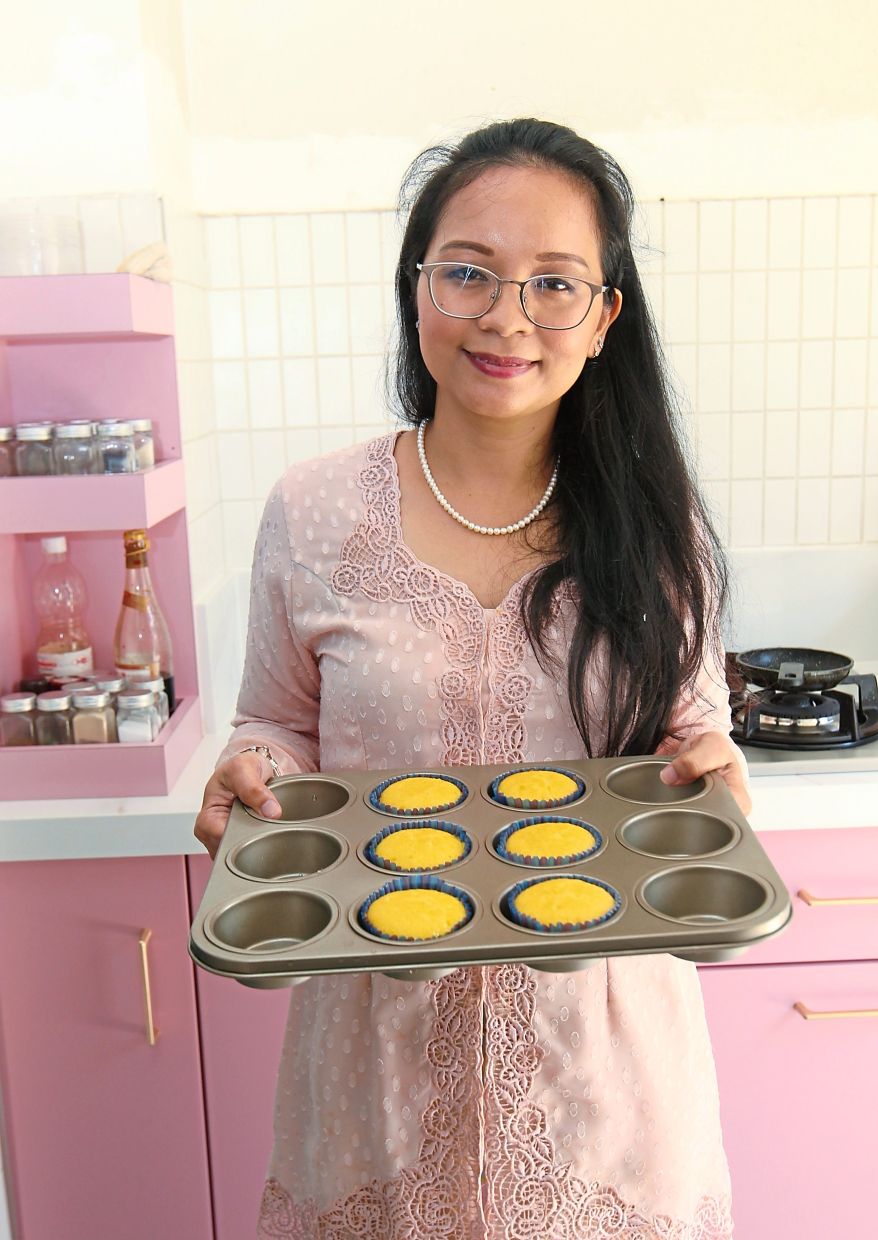 Ayu is the daughter of award-winning cookbook author Datin Hamidah Abdul Hamid, which is why she is so passionate about making and preserving heritage kuih recipes.

“It’s part of our heritage, that’s why my sisters and I have taken over – we are the next generation that actually uses these recipes in our homes, ” explains Ayu.

Chief among Ayu’s kuih-making endeavours is her famed lopes pulut, a Johor dessert that her mother used to make and which she has since become known in family circles for. The dish is essentially made up of glutinous rice (pulut) and grated coconut, drizzled with palm sugar. The technical aspect of the kuih is in the notoriously laborious (and labyrinthine) process of folding the glutinous rice into banana leaves.

“It’s simple, but the tedious part is the wrapping, so everyone gets together for that. It can be torturous for my kids to do – they will try to do it, and then they will be like, ‘Oh mum, no!’

Among her relatives, Ayu’s lopes is so revered that her aunts even buy kilos’ worth of the kuih from her for their own Hari Raya celebrations!

“Most of my aunties will order 3kg or 4kg of lopes from me, because I’m the family lopes-maker. If I don’t make lopes for Hari Raya, everyone will be like, ‘Ayu, where’s your lopes?’” says Ayu, giggling.

Another kuih that Ayu always makes for Hari Raya is kole kacang, a traditional coconut-rich indulgent dessert that has pride of place in Johor culinary history and is sadly quite hard to find these days.

Kole kacang is made using green bean flour, palm sugar and coconut cream, but the truly unique thing about it is the topping scattered atop, which is fashioned out of coconut cream stirred on low heat until it reduces and forms oil crumbs (tahi minyak).

“I didn’t like it when I was younger, because to me, this kind of kuih was reserved for the elderly. But I acquired a taste for it when I was in my late teens, so that’s why I started making it myself for Hari Raya, ” says Ayu.

Her kole kacang is yummy – thick, almost pudding-ey slabs of kuih that have a melt-in-the-mouth texture. But the real star player here is the topping – crunchy little coconut-infused shards that crumble upon contact with your palate and elevate the kuih to a different dimension altogether.

In recent years, Ayu has also added another rare Johor heritage kuih to her arsenal of Hari Raya desserts, and this is one is especially precious because the recipe was personally given to her by YAM Tunku Kamariah Aminah Maimunah Iskandariah, the Tunku Puteri of Johor.

“Bludall is a royal dessert that I got from the Johor princess. We have been family friends since I was small and she knows that I like to keep and preserve old recipes, so she gave this to me, ” says Ayu.

The dessert is very similar to a cupcake and is moist and dense with a sticky top and underlying egg-laced nuances. It has a simple flavour profile but is also incredibly fulfilling and ultimately, really quite addictive. 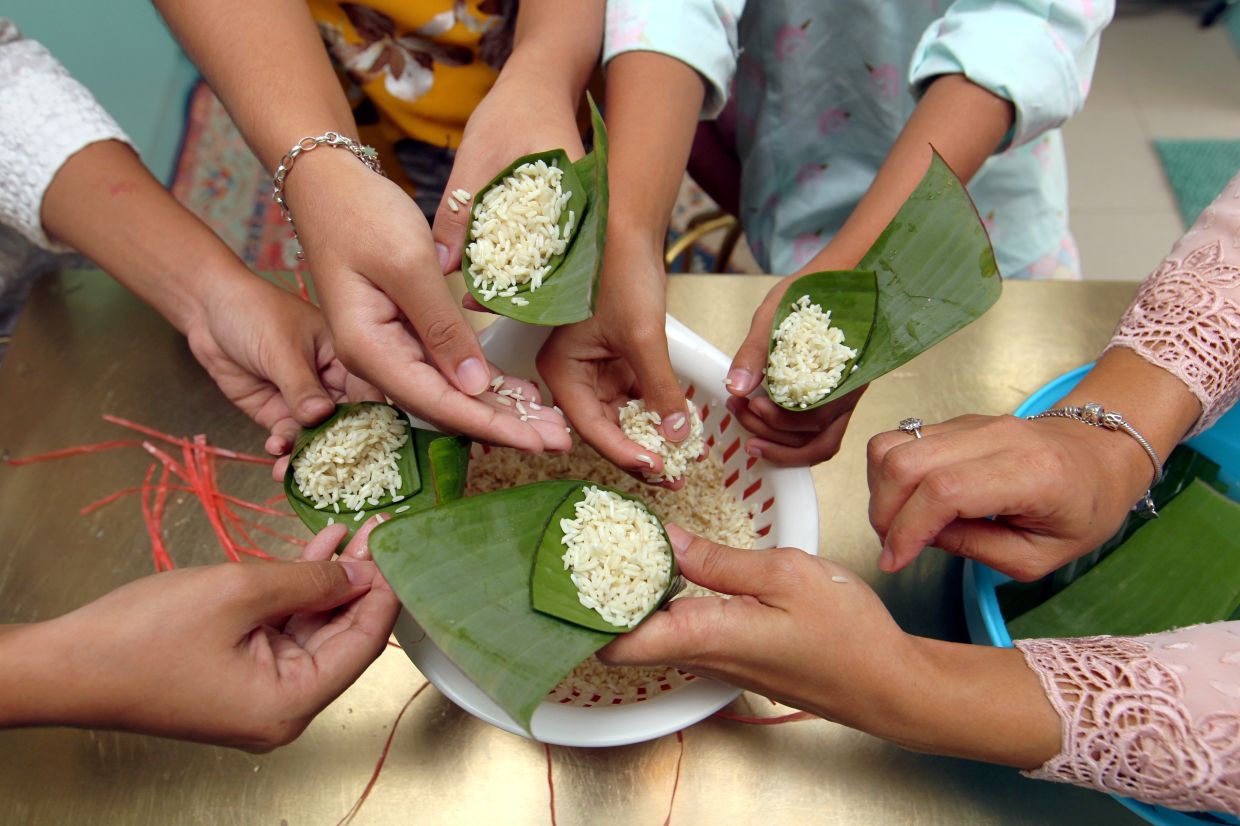 In Ayu's family, everyone gets together to make the heritage lopes pulut, which involves the tedious task of wrapping glutinous rice in banana leaf parcels.

It is also a closely-guarded royal family recipe that you are unlikely to find anywhere, simply because it has never been shared before.

“It’s never been revealed and not many people know to make it, except maybe people whose families have worked in the palace. Also there is some skill involved in making this, because the dough takes a long time to rise, so you have to be patient, ” says Ayu.

While Ayu is scaling back her kuih-making this year, given the Covid-19 global pandemic and the fact that her full family gathering won’t be a possibility, she is determined to continue making small batches of her heritage treats.

“We’re going to have a potluck Hari Raya with my siblings, so I will definitely be making all the kuih – I just don’t have to make so much this year!” she says, laughing.

Ultimately, Ayu says the reason she is so determined to continue making these heritage kuih with her children is because she wants the tradition to continue.

“It’s important because food makes everyone comes together and everybody looks forward to these things as they get older. And the culture of making kuih is slowly disappearing, it is very difficult now to find traditional kuih made the traditional way. A lot of people are modernising and modifying recipes.

“So it is crucial to me that my girls and my son know the recipes and make and preserve them. So later when I’m older and I don’t have the energy to do it, at least I know I can go to their houses and eat it!” she says, laughing. 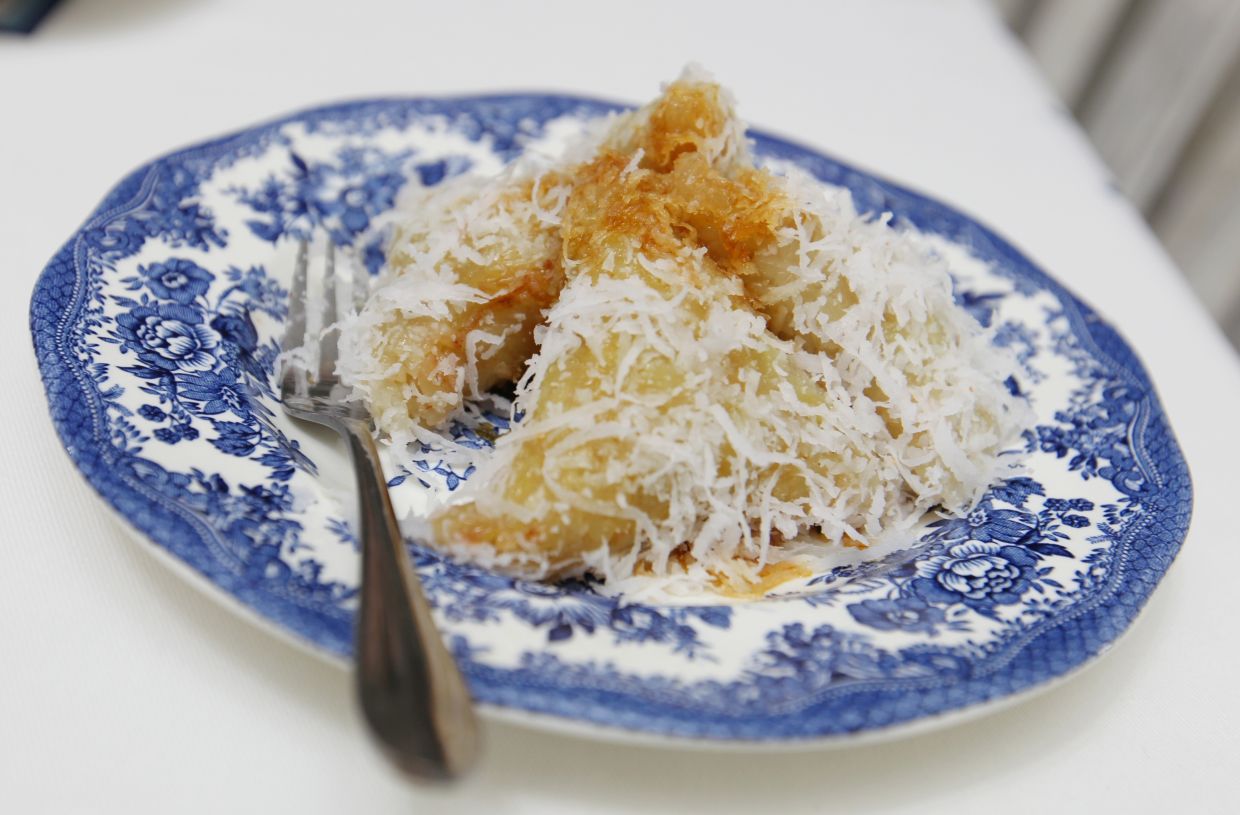 Wash the glutinous rice and soak in some water and the edible slaked lime water for about 30 minutes. Wash and drain.

Fold a banana leaf in half to make a cone-shaped pocket at each end and fill with glutinous rice. Fold over the end to make a complete triangle. Tightly secure with a piece of string to make triangular shaped parcels. Repeat until all the glutinous rice is finished.

Bring a pot of salted water to boil. Immerse the lopes parcels in the water and boil for 30 to 40 minutes, or until cooked. Remove from the pot and leave to cool.

Combine all the ingredients in a pot and boil until the sugar dissolves and syrup thickens. Strain into a sauce bowl.

grated coconut, from one coconut

Mix grated coconut with a pinch of salt and steam for 5 minutes. Leave to cool.

To serve, unwrap the individual glutinous rice parcels, roll the lopes in the coconut and serve with palm sugar syrup. In a wok, stir the coconut cream on low heat until it turns golden brown and forms oil crumbs (tahi minyak).

Separate the crumbs from the oil using a strainer and set aside. Save the excess oil.

Boil the ingredients for syrup until the sugar dissolves. Strain the syrup and set aside to cool.

For the kole kacang

Combine all the ingredients and strain into a heavy-bottomed pot. Stir and mix evenly before cooking over medium to low heat. Stir constantly to avoid curdling.

Once the mixture thickens, pour into a square cake tin or casserole dish. It will set at room temperature in about 1 to 2 hours.

When cool, cut into small squares and sprinkle the tahi minyak evenly on top. For the yeast mixture

Beat sugar and butter till fluffy. Add in the yolks. Fold in the flour, bit by bit and stir in yeast mixture at the end.

Pour into pan or cupcake liners. Set aside for about 45 minutes to 1 hour to let the mixture rise.

Use foodpanda Voucher for lower prices on light bites 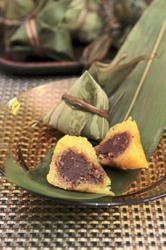 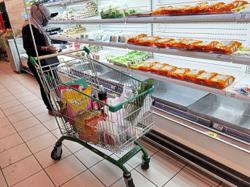 Adventures in grocery shopping during the lockdown
An increasing number of home cooks are turning to healthy, immunity-boosting food during the lockdown
Delightful parcels shaped at hotels
Driven by delectable dumplings
Festive delights can still be enjoyed from comfort of home
Fruit-filled royal treat
From The Archives: Coliseum Cafe, a slice of Malaysian history for 99 years
Freshly made gourmet meals delivered to doorstep
Discovering ingredients behind Sarawak laksa
Crispy goose for vegetarians