It is a barbecued dish of heavily seasoned beef served with a spicy dipping sauce, and usually eaten as a lettuce wrap or with steamed rice. ‘Sua rong hai’ or crying tiger beef is served as a lettuce wrap with a Thai-style dipping sauce.

Its name is derived from local anecdotes on cattle that had been mauled by tigers and the carcasses then recovered from the jungle.

Villagers would collect the remains, usually the brisket or bottom sirloin --- parts which the tiger was said to have left uneaten due to the bones obstructing the flesh.

According to the folklore, since the tigers were deprived of the enjoyment of these parts of the beef, they were said to cry, hence the name of the dish.

It is also said that the beef brisket, called tiger meat in Thailand, consists of layered meat and fat which resembles tiger skin.

And as the meat is charbroiled, the dripping fat resembles teardrops, in addition to the stripes of the grill marks, all of which also allude to the tiger’s “presence” in the dish. Daging harimau menangis made headlines recently when a businesswoman tried to patent the name.

Even after she retracted her bid, the social media storm that followed not only brought greater awareness of this dish, it also entrenched its Thai origins.

This dish is very popular in many Thai food courts and street stalls, with each vendor boasting their own unique recipe.

The standard marinade consists of salt, sugar, pepper and fish sauce, with the addition of soy sauce, oyster sauce, garlic or coriander in its many variants.

The brisket cut of meat is one that contains a lot of connective tissues, so you either have to cook it very slowly over a long time, or briefly at very high heat, to no more than medium. Cut beef brisket into half-centimetre-thick slices and pound each slice with a mallet before marinating.

Another way to tenderise it is to pound it with a mallet to break down some of the long and criss-crossed fibres.

The recipe is so simple that anyone can prepare this dish at home.

The meat just needs to be marinated for about half a day until it is almost cured.

Then, briefly charbroil over an open fire or grill in a cast-iron skillet, keeping the meat medium-rare.

It can also be grilled in the oven, but it will be harder to control its doneness.

It is served with a spicy dipping sauce, variants of which may include chilli flakes, tamarind and palm sugar instead of fresh chillies, lime and sugar.

This is an excellent dish to grill at the table if you have a hibachi or electric grill at home.

Served hot off the grill, these morsels of meat wrapped in lettuce are a great communal dish. Pour the marinade over the sliced beef and leave the meat to marinate for four to five hours. Slice beef to half-centimetre-thick strips. Pound with a mallet until tender.

Blend all marinade ingredients into a fine paste in an electric mill.

Marinate beef for 4 to 5 hours.

Broil beef over charcoal or in a skillet, 2 minutes on each side.

Or grill on a rack in a 250°C oven for 10 minutes until lightly charred.

For the dipping sauce, blend all the sauce ingredients except for shallots, red bird’s eye chilli and coriander into a fine paste.

Stir in remaining ingredients and serve the dish in lettuce wraps. 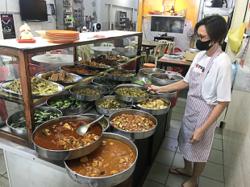 What is the 'internal shower' drink that is trending on TikTok?
Toblerone chocolate to lose 'Switzerland' label and be made outside Swiss homeland
Belly good dish served cold
Ordering in: The couple who couldn't cook but started a successful food business
Ordering in: Three siblings started an online delivery business focused on Norwegian fjord trout
An increasing number of fathers enjoy cooking for their families
Afternoon tea with Abbey the Bear
Grandma woks up wholesome meals
The Malaysian chefs in key roles at one of the world's top restaurants, Odette
Fall for classic British crumble