Kok chai or mini peanut puffs are made to resemble the ancient Chinese gold ingot, which represents prosperity. Photos: The Star/Samuel Ong

Homemaker Lee Yit Ching, 71, is as enthusiastic as ever about making her most sought after snacks, the kok chai, mini puffs filled with peanuts for Chinese New Year celebrations.

Even though the festivities have been scaled-down due to the movement control order (MCO), the Jinjang-based septuagenarian is in high spirits.

“While we aren’t celebrating on a grand scale, I will continue our family tradition of making kok chai and giving them to loved ones.

"The Chinese New Year spirit, even with the restrictions, can be lifted with treasured festive snacks, ” says Lee, who has been making kok chai for 50 years.

In the days leading up to Chinese New Year, she has set a target of making 30 plastic containers of kok chai.

During Chinese New Year, most homes would have a circular-shaped candy tray - known as the Box of Harmony - with compartments to serve their offerings. "There’s a burst of sweetness and aroma of peanuts in each bite. It symbolises sweet success for the year ahead, ” explains Lee, with a twinkle in her eye.

The grandmother of three makes the sweet puffs from scratch, even though these cookies can be easily purchased from supermarkets or online platforms.

Lee, who hails from Bentong, Pahang, is married to retiree Ng Tuck. She learned to make kok chai from her mother-in-law in 1961, the same year she married Ng.

“My husband loves to eat kok chai, and my late mother-in-law insisted I learn to make it when I married into the family.

"This recipe is over 90 years old, and handed down the generations. I’ve taught my daughters to make it too, using our family’s traditional methods.

"While the old-fashioned ways are tedious, it’s important to preserve them and honour our heritage, ” explains the mother of four.

Lee is proud of her handmade mini peanut cookies, and does not abide shortcuts in preparing her prized snacks.

She insists on roasting the groundnuts herself, eschewing store-bought ones. She starts by frying her peanuts slowly on a pan till they are golden brown.

Once cooled, Lee uses a glass bottle to crush the peanuts into fine bits. She then adds castor sugar for sweetness.

“In the past, we didn’t have a rolling pin so we substituted it with other kitchen items like a long drinking glass or empty wine bottle.

"While some people use a food processor to pulse the peanuts, I prefer to hand crush them because I can control the size of the crushed peanuts, ” explains Lee.

Only four ingredients - flour, water, oil and some salt - are used to make the dough for the mini cookies. The dough must be pliable and smooth, adds Lee.

“If the dough is too sticky, add in a few teaspoons of flour. If it’s too hard, it means less water was added. It is important to knead the dough well till the flour, water and oil are well absorbed.” 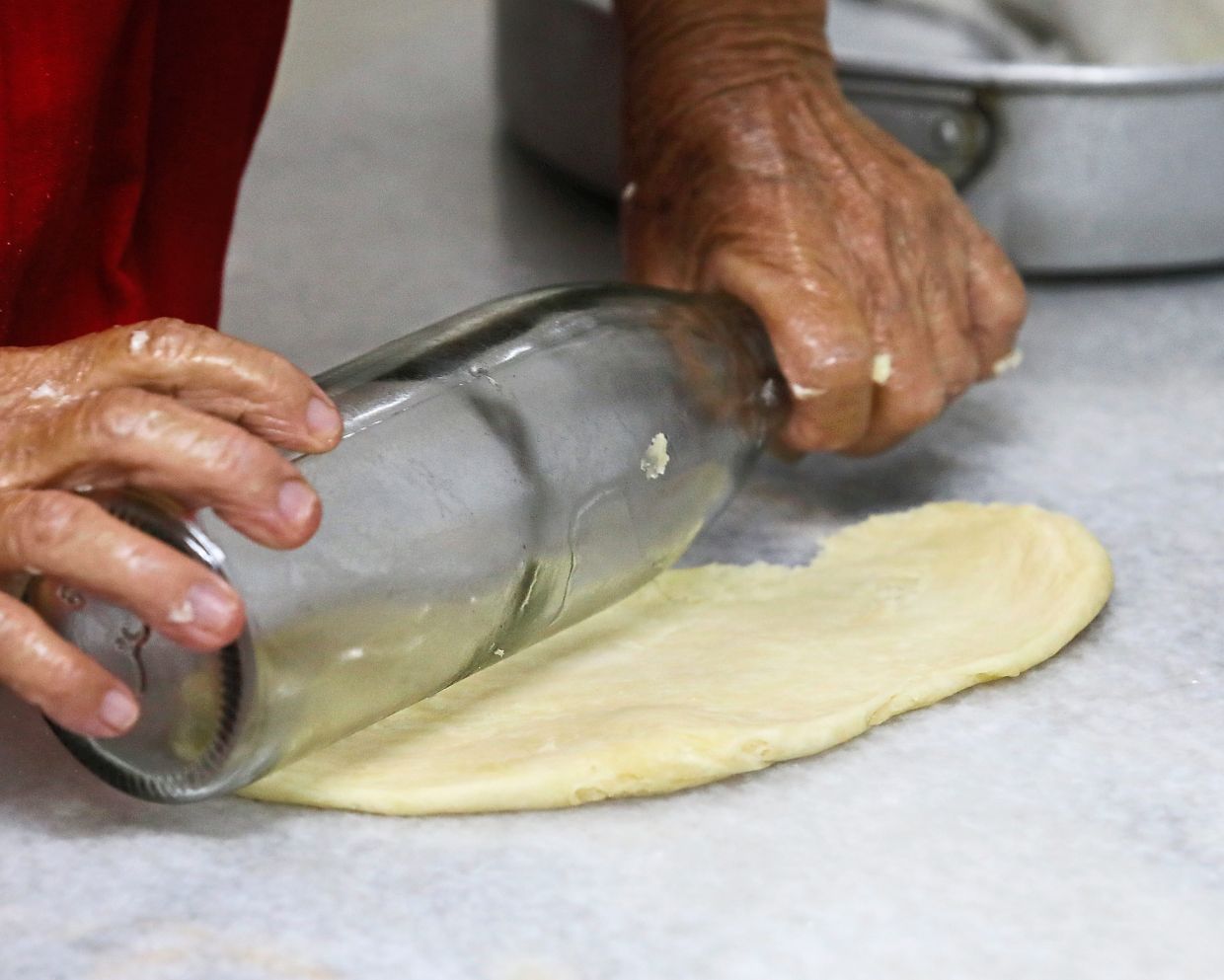 No rolling pin? No problem. Lee uses a glass bottle to roll out the dough, a method she’s been using for over five decades.

Once the dough is ready, Lee uses her trusty glass bottle to roll out the dough.

“Unlike wooden rolling pins, glass bottles have a smoother surface and prevent dough from sticking to surfaces. Plus, it is rounder and longer, which makes it easier to roll the dough.”

She uses a thin drinking glass to cut the dough into circles, measuring 6cm in diameter. The glass is undoubtedly vintage, probably from the 1960s, judging from its classic ribbed designs.

“The slimmer the rim, the better. It’s easier to cut through the dough, ” explains Lee, who has a large collection of these old-fashioned glasses in her display cabinet. “The thinner the rim, the better. It’s easier to cut through the dough, ” Lee explains.

She spoons the peanut filling into the dough. It is then shaped into a crescent puff and deep-fried on medium heat for a few minutes. The smell of freshly fried kok chai permeates the air.

The kok chai is a crunchy delight bursting with peanuts’ earthy flavours and light hints of sweetness. Be warned, one you start, it’s difficult to stop eating these crescent-shaped delights.

Lee is pleased her daughters - Nicole Ng Mok Lan, 48, and Nini Ng Mok Ying, 47, have followed in her footsteps and learned the art of making these puffs.

Nicole and Nini have been helping Lee for over 25 years and well versed in the details that go into creating these crunchy morsels.

Nicole admits it’s a laborious task to make kok chai, one that requires lots of patience and perseverance. It’s a time-consuming process to perfect the pleats on the puff’s edges.

“Use your thumb and index finger to pull up a small portion of the side of the dough. Fold and pleat tightly till each kok chai is tightly sealed. You should get a nice swirl pattern, ” explains Nicole.

The businesswoman adds it takes them about four hours to make about 400 puffs. 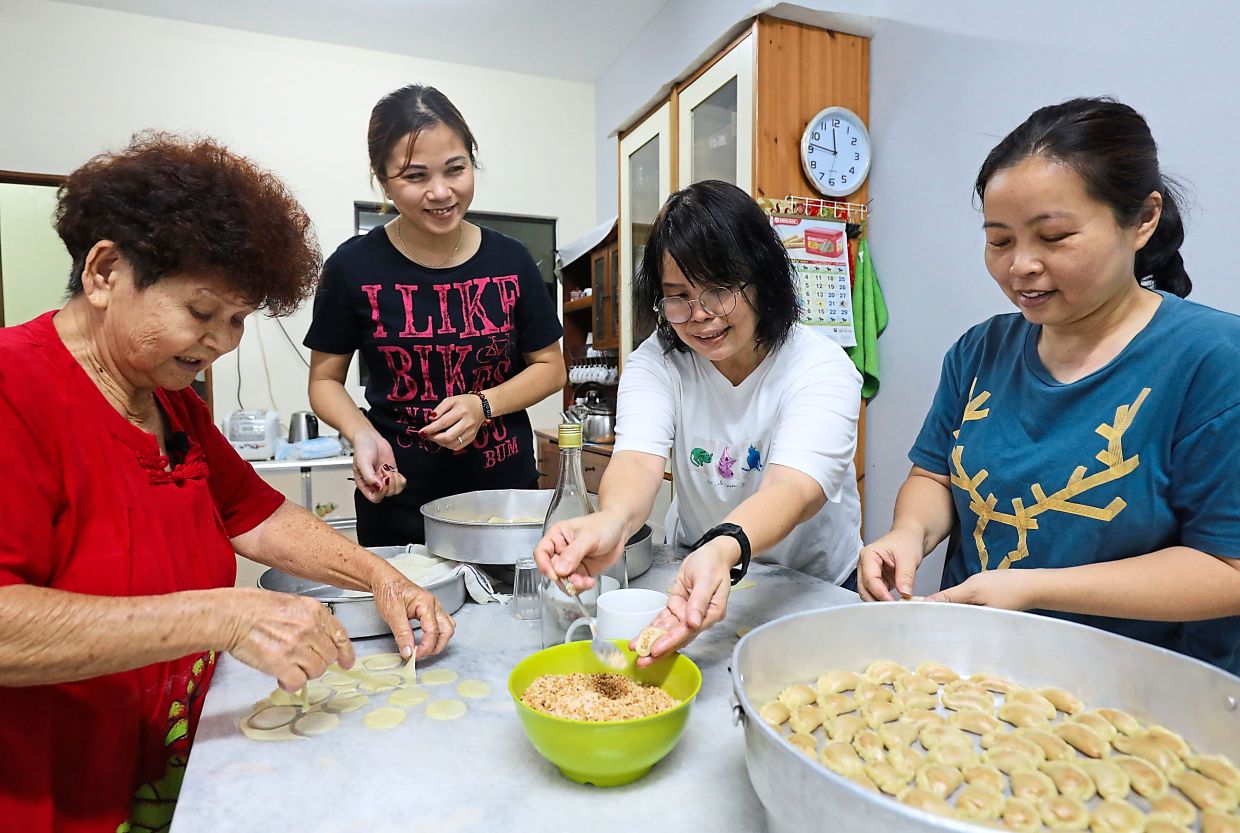 Nicole (right) and her sisters lending a helping hand to make kok chai.

While making these treats, Lee and her daughters believe they must be calm, with positive thoughts. Just like when making other Chinese New Year delicacies like nian gao and huat kueh (steamed rice cakes), the belief is that negativity will affect the outcome.

“We can’t utter negative words like “die” “bad luck” or “sick”. We are forbidden from quarreling, gossiping or expressing strong emotions when making them. It is believed the puffs would burst open while being fried, ” Nicole says.

Up to last year, it was a yearly ritual where Lee’s relatives would come to her house to help her to make kok chai. On average, they could make about 50 plastic containers.

“I could do much more because there were extra pairs of hands to help. In the past, our kok chai making sessions were almost like our pre-Chinese New Year celebration.

"Relatives would gather around, and we’d prepare food and drinks. It was lots of fun and merrymaking.”

While Lee misses the good old days, she understands the importance of keeping safe during the pandemic. She’s accepted the new normal positively.

“I’ve learned to make the best of the situation, even if it means I can’t celebrate Chinese New Year with loved ones.

"To keep up with traditions, I will continue to make these puffs as long as I can. And there’s nothing more rewarding than sharing it with loved ones, ” Lee says on a concluding note. It takes a lot of patience and skill to make kok chai.

Combine wheat flour and salt in a bowl. Add water and oil and knead into a smooth dough. Cover with a damp cloth and set aside for 10 minutes.

Roll out dough to about 3mm thickness

Use a dough cutter to cut a circle, measuring about 6cm in diameter

In the circle, place a teaspoon of peanut filling in the center.

Fold the dough into a semi circle.

Seal the edges by pressing and pleating the edges together. Repeat until the filing is used up.

Heat oil in a wok on medium heat. Drop the shaped kok chai into the oil. Fry the kok chai till light brown.

Allow the kok chai to cool completely and store them in an airtight container. Kok chai or mini peanut puffs are made to resemble the ancient Chinese gold ingot, which represents prosperity. Photos: The Star/Samuel Ong

It takes a lot of patience and skill to make kok chai.

Nicole (right) and her sisters lending a helping hand to make kok chai.

No rolling pin? No problem. Lee uses a glass bottle to roll out the dough, a method she’s been using for over five decades.

“The thinner the rim, the better. It’s easier to cut through the dough, ” Lee explains.

CNY dishes in the comfort of home