Ingredients for tauhu telur are basically eggs and tofu with a variety of fresh herbs and vegetables served with a spicy sweet garlic sauce.

Although frying eggs and tofu together is quite a common dish all over Asia, tauhu telur is a unique creation that originated in Indonesia.

It is fried as a solid block of egg and tofu sitting on a bed of crunchy shredded vegetables, served with spicy sweet soy-based sauce and peanuts.

The vegetables for this dish are usually carrots and cucumber but these can be substituted with bean sprouts, jicama, lettuce or red cabbage. Peanuts may be left whole, crushed into coarse chunks, finely ground or milled into peanut butter and added to the dipping sauce.

This fusion dish was created when Chinese immigrants came to Indonesia with a very Chinese ingredient — tofu.

It was initially made in Surabaya in East Java and later spread all over the Indonesian archipelago.

In some versions of the dish, the tofu is fried before adding to the egg and fried again. Another evolution of this dish uses the cylindrical Japanese-style egg tofu.

I prefer the boxed silken tofu for its clean flavour instead of the strong coagulant taste that is sometimes obvious in egg tofu.

The biggest challenge for making tauhu telur is to get the mixture to cook into a solid block in hot oil.

A 10cm ring mould of about 5cm high or a special cylinder that resembles a ladle without any bottom can be used.

The best substitute is a longan can with both ends cut out.

The mould is placed in a pot containing hot oil. Continuously ladle the oil into the mould to keep it hot.

When the tofu mixture has been filled into the cavity, the heat needs to be lowered down to medium to prevent the bottom from burning, while ladling continues to make sure the egg sets inside the mould.

After about 15 minutes, the mould can be gently removed to allow the block of tofu and eggs to fry until crispy and golden. Drain off the excess oil with paper towels.

The key seasoning for tauhu telur is the spicy dipping sauce with kicap manis — an essential condiment in the Indonesian pantry made of fermented soybeans, palm sugar molasses and a motley of spices.

This can be substituted with a mixture of light soy sauce and brown sugar but it will lack the trace accents of star anise, cinnamon, coriander and cloves that the store-bought version contains.

Some versions of the sauce include terasi, which is the Indonesian version of belacan.

But this ingredient can be omitted if you want to keep it a vegetarian dish.

It is quite well documented that tauhu telur originated from our neighbour and to this, we raise our glass in tribute to Indonesia as the nation celebrates its national day on Aug 17.

Heat oil in a wok to fry peanuts. Drain and put aside when peanuts turn golden brown. In remaining oil, fry sliced shallots until crispy and light golden. Put aside as garnish.

Heat cooking oil in a pot on high, and place a 10cm-diameter ring mould in the centre.

An empty tin can with both ends cut open works as well. Add enough oil to cover the mould.

Combine eggs and cornflour in a bowl, whisk well and add tofu cubes. Once the oil is very hot, ladle the egg-and-tofu mixture into the mould to reach three-quarter’s way up.

The mixture may overflow as it cooks so ladle the spillage back into the mould.

Lower the heat to medium and cook until the mixture has set, then remove the mould and continue to fry the tauhu telur until golden brown and crispy.

Remove and drain excess oil from the tauhu telur on paper towels.

Pat dry shredded cucumber and carrot and arrange into a nest on a plate.

Place the tauhu telur in the centre and garnish with fried peanuts, shallot crisps and herbs.

Blend the sauce ingredients then drizzle the sauce over the tauhu telur when serving with extra to dip on the side. 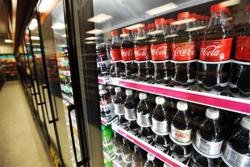