Curious Cook: The new abnormal at meat processing facilities in the US

Americans consume the most amount of meat of anyone on the planet, at over 100kg per year per head. — Bloomberg

Just several weeks ago, I wrote about the robustness of modern food supply chains and how there is little need to worry about our food supply even in the middle of a pandemic. However, I should have qualified that with the word, “sensible”.

There is little to worry about “sensible” modern food supply chains.

There is actually quite a lot to worry about modern but crazy, unstable food supply chains which can implode chaotically with astounding cruelty and waste within a very short space of time.

Please note most countries do not have such unstable food chains so chances are good that you are not affected. But the currently largest economy in the world has seemingly developed huge but precarious food chains in its endless, unnecessary, barbarous quest for profits. And things are crumbling in parts of its food chains.

Part of the definition of the term “chaos” includes: huge sensitivities to tiny changes in conditions. And chaos might be what is happening in the US supply chains for meat, which are reliant on huge concentrated animal feeding operations (CAFO) and very large “meat processing facilities” (MPF), their term for slaughterhouses.

For various reasons, there are very high incidences of Covid-19 amongst workers in the immensely large MPFs scattered around the USA. The causes may be close proximity of workers in such MPFs, unfiltered air conditioning systems, the lack of personal protection equipment for workers, poor sanitation, etc – we do not know all the factors but for whatever reason(s), some of the largest MPFs have around 40% of their workers infected with Covid-19, with several deaths occurring. 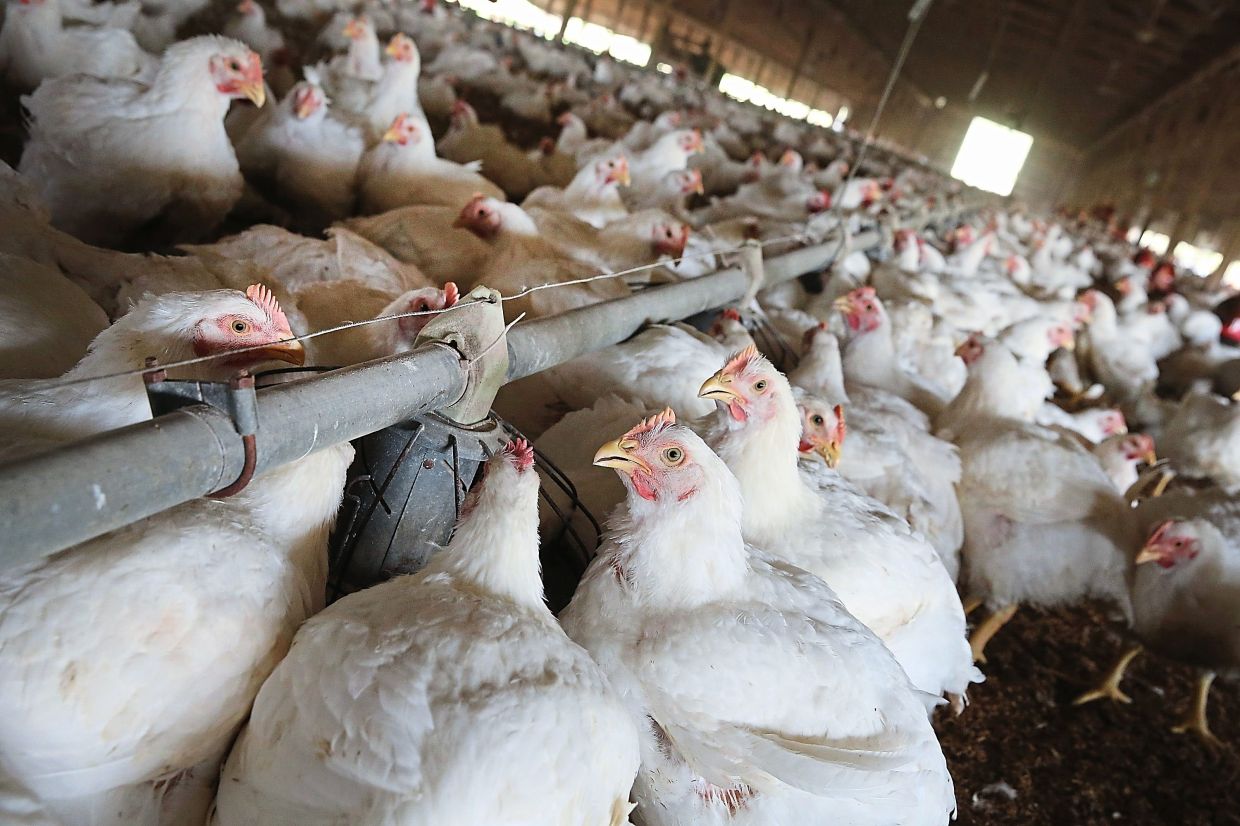 Chickens in farms across United States are being culled in methods that include gassing and suffocation, as farms simply cannot feed the animals past their projected slaughter date. — AFP Relaxnews

As a result, more than 20 MPFs have been forced to close in the United States, with at least another 79 having cases of Covid-19 and hence may also face closure or reduced operations.

One would think that closing slaughterhouses would be good for livestock animals, but the reality is very different. This is due to the way the US meat industry is organised. Everything is structured as huge rigid production lines with little to zero contingency planning in the event of any disruptions.

Chickens are raised in huge farms in conditions so poor that the carcasses after slaughter require dipping in chlorine solution to disinfect them. Pigs are reared in such huge densities that some cannot even walk properly. Cattle are herded into huge CAFOs where they are fed copious amounts of corn to fatten them before slaughter.

The mantra in US meat farming appears to be “get big or get out”, which some might consider an arrogant, bullying way of running an industry where sentient animals are involved. I would also personally consider it an inappropriate way to manage the welfare of both animals and consumers as both parties are mistreated in the quest for profits.

Livestock animals are subject to immensely cruel breeding and slaughtering conditions and humans are ingesting hormones, antimicrobials, pesticides and other residues in meat. Just on the subject of antimicrobials, the world’s production of such compounds is shared between humans (25%) and the livestock industry, which has the much larger share at 75%. Its use in livestock is leading to growing signs of Antimicrobial Resistance (AMR) in livestock bacteria.

The World Health Organization estimates at least 700,000 people die each year due to AMR, rising to an estimated 10 million a year by 2050. For more information, please read my previous article on this, titled ‘What is Bugging Meat’ on The Star Online.

What happens when food chains are disrupted is probably some sort of supply limitation which will likely be rectified over time. However, when very large unstable food chains get disturbed, the outcomes can be hideous and unbelievably cruel.

An example might be the part or full closure of a MPF for chickens. In an ordinary week, such an MPF may be slaughtering and processing a million chickens a week. If the MPF is throttled down to operate at 50% capacity, it would have a problem with half a million chickens. This problem is usually solved by culls, also known as depopulation in the US meat industry.

Depopulation is unimaginably cruel. Chickens in the US are normally bred to live only 42 to 47 days before slaughter. Chickens of this age are euphemistically called the Commercial Layer Flock. The whole economics of a large chicken farm is based on the cost of feeding chickens only for this 6-7 weeks’ period of time, with streams of chickens raised to supplant the Commercial Layer Flock continuously. So whether the chickens get slaughtered in time or not, the farm does not have the resources to continue to feed chickens past their slaughter date, nor the ability to slow the growth of the next batches of chickens. Unknown numbers of cows will also likely be culled. — Bloomberg

So chickens would be depopulated by various means. The most common method would probably be via closing the ventilation systems in the large chicken farms – this raises the temperature internally and eventually causes organ failure in the chickens. Another method is foaming, the practice of covering whole flocks with a water-based foam, slowly suffocating the birds to death. Yet another method is wholesale gassing of flocks inside the chicken farms with carbon dioxide. A less often used method is the use of avicides (poison that affects birds) in the drinking water.

Therefore, there is nothing humane or gentle about the process of depopulation. Currently, millions of chickens have already been killed, with possible plans to depopulate 700,000 pigs a week and unknown numbers of cattle.

Such huge culling events inevitably filter through as meat supply shortages to consumers. And as cold storage rooms are only designed for streamlined capacities, there is unlikely to be enough buffer stocks of meat for US consumers, especially as storage life for meat is limited anyway.

Hence the consolidation of slaughterhouses in the United States to reduce costs and improve profits for large meat producers in the past has led to a situation where a reduction in the slaughtering capacity of meat (known as harvesting) can cause unimaginable misery for millions of animals and the destruction of livelihoods for many farmers.

This is just one example as a disrupted supply chain, which was precariously perched in the first place. Why these sorts of situations are allowed to develop in the first place is an interesting question, and the main answer is simply: Greed. It is not just corporate greed but also consumer greed for meat and meat products.

The United States is the world’s largest consumer of meat, at over 100kg a year per head of population on average. Meat production is directly or indirectly hugely sponsored by the US government via subsidies for US corn, and hence meat is a heavily promoted household food. Such promotion means high levels of consumer demand for meat which in turn makes huge profits for US meat suppliers.

Nutritionally, like all foods, meat has its plus points and minus points, and this information is widely available, even in other articles in this column. There is no real requirement to eat meat, especially if other foods are augmented with sensible supplements as required.

The point is that times like these expose the fragility, barbarity and commercial considerations of an industry that is hugely based on offering a product which is not strictly essential for (most) humans. It might be time to consider what happens to livestock the next time there is a processing disruption in the supply chain. Specifically, it may be time to think about huge depopulation events and why some food supply chains are so poorly organised for the welfare of livestock animals.

If you are wondering why the United States does not ship such surplus livestock to other neighbouring countries which need such food, the answer is because it is logistically complex and expensive (e.g. storage, transportation, labour, etc) and the US food industry would never do anything which reduces their profits.

In summary, should anyone support a fragile, cruel, flawed industry like the meat business in the United States? If not, then perhaps we should make the effort to investigate if our local meat industries are significantly better.