Easy nibbles and snacks for Ramadan

These sweet and savoury snacks are ideal for newbie cooks and those pressed for time. Photos: JANE F. RAGAVAN

THE empty racks of cookware, kitchen utensils and portable stoves at the neighbourhood hypermarket are probably an indicator that more people are beginning to cook.

On my latest run to the nearest hypermarket (4.3km and two road blocks away) a few days before the fourth extension of the movement control order was announced, my shopping list included a new chef’s knife – the one I have right now is so blunt that a household knife sharpener has been no help.

But I was out of luck at the store. There was not a single knife and the only cooking pans left on the shelves were the higher-priced range of that well-known French cookware brand.

New cooks are emerging and the simple recipes featured here are with them in mind. The dishes also make refreshing desserts and snacks for those breaking fast during Ramadan. 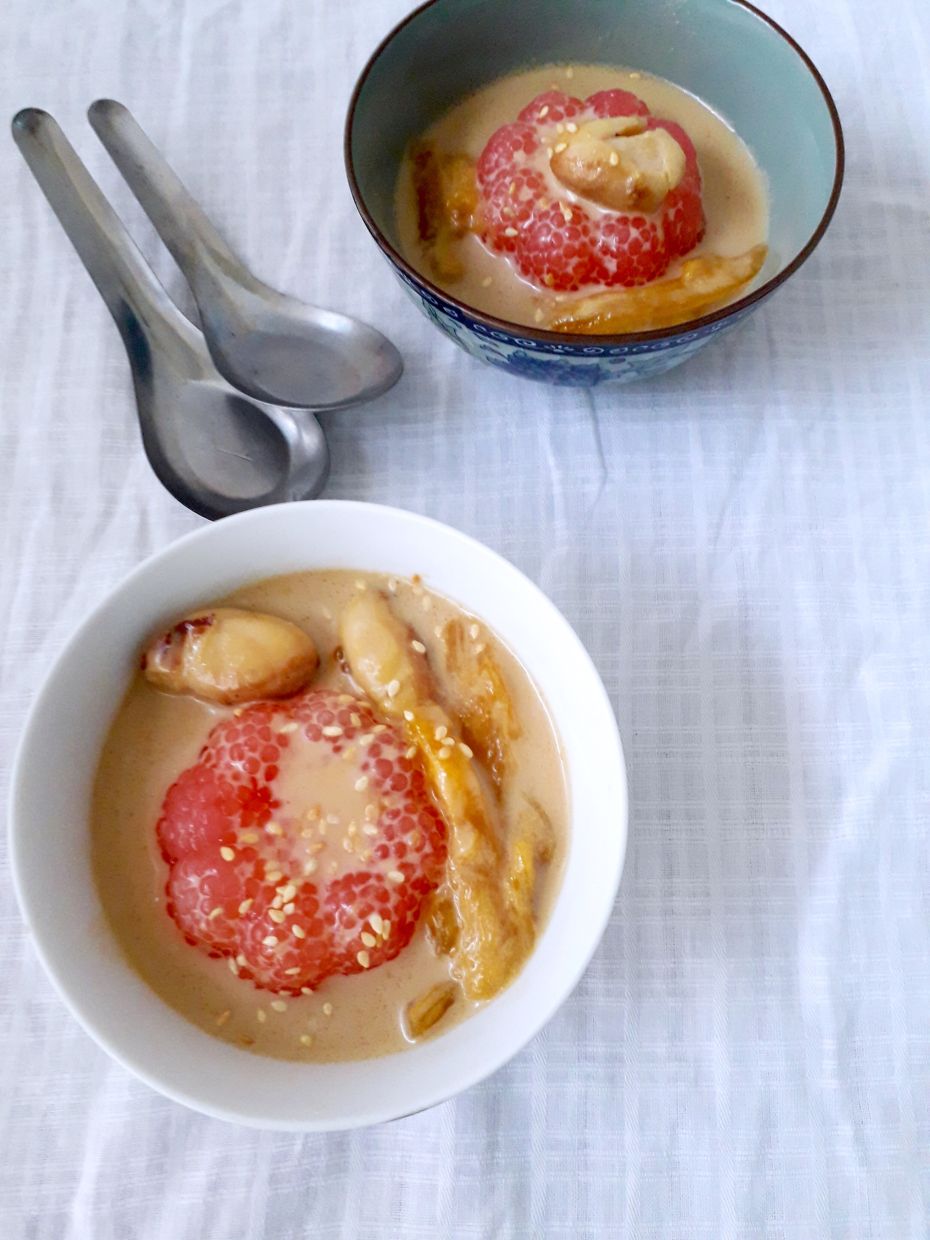 Replace the sago with tapioca pearls, and the jackfruit (nangka) with various other fruits such as banana, durian and cempedak. Pumpkin, sweet potato and taro are also good substitutes – adjust cooking times for the firmer flesh.

6 tbsp palm sugar, or to taste

Bring 1 litre of water to the boil in a large pot. Add a pinch of salt and pour in the sago while stirring to prevent sticking. Cook the sago, stirring occasionally, on a low boil until they turn translucent, about 15 minutes. Pour into a sieve and rinse under running water to remove excess starch. Drain well. Scoop into a container and stir in rose syrup, if using. The sago can also be put into moulds. Chill until set.

Tear the jackfruit into strips. Place them in a pan with the coconut milk, palm sugar and water. Cook over high heat and bring to the boil. Turn down the heat and cook a further 2-3 minutes. Stir in sesame oil.

To serve, scoop sago (or unmould) into individual bowls with some of the coconut jackfruit. Sprinkle with sesame seeds. Serve warm or chilled.

*The edible seeds of the jackfruit can also be included in the dessert. Boil them until soft, then peel off the tough outer skin and the thin inner skin. This is a way to use up leftover ketupat nasi (rice cakes). Normally, the best way to cook a dish such as this would be in single portions. In the interest of time, we’re making it in family size. There’s not much preparation, but if cooking the dish for sahur, it may be better to do the cutting and slicing – the mise en place – the night before so all that is required the next morning is the frying, which should take less than 10 minutes.

Heat oil in a wok. Add the cubes of ketupat and fry for a few minutes until lightly brown. Add the garlic and preserved radish and sauté for a minute.

Stir in chilli paste/sambal belacan and a splash of water. Add dark soy sauce, salt and pepper, and stir to combine.

Push rice cubes to the side of the pan. Add eggs and allow the bottom to set slightly, 15 seconds. Toss rice cubes with the eggs.

Add bean sprouts and chives. Stir fry for another minute. Plate up and serve immediately. In Malay families, this recipe has probably been passed down from mother to child through the ages, although Mum would have just used “genggam” (handful) to measure the ikan bilis and peanuts.

1-2 tsp chilli powder, or to taste

In a dry pan over medium heat, roast the peanuts until crisp and light brown. Set aside.

Dust the ikan bilis with the rice flour. Heat oil in a wok (the oil should reach about 2cm up the side of the wok) and fry the ikan bilis over medium heat until golden brown and crispy, about 1 minute. Drain on paper towels. Pour out the oil and clean the wok.

Combine the sugar and water in the clean wok over medium heat, stirring until the sugar dissolves. Allow it to boil and simmer and thicken slightly, about 1 minute.

Stir in the roasted peanuts and remove from the heat. Store in an air-tight container. Eat as a snack or a side dish. Jelly is often a light and refreshing dessert, but when you add bread and eggs, it becomes a dish that sticks to your ribs.

We use a 20cm by 4cm baking tin as a mould, but even a plastic food container of a similar size will work.

You don’t need to use dairy milk in the agar-agar; if you like the taste, coconut, soy or almond milk will work just as well.

Tear the bread slices into pieces. Place in a blender or food processor with the milk, water, condensed milk and eggs. Blend until smooth. Set aside.

For the agar-agar base, stir together the agar-agar powder and caster sugar in a large saucepan. Add the water and stir to combine. Over medium heat, bring the mixture to the boil, stirring constantly, until the agar-agar and sugar dissolve. Take the pan off the heat and stir in the bread mixture. Return pan to the stove and over low heat, cook until mixture slightly thickens. Stir in vanilla extract.

Divide the mixture between two bowls. Stir food colouring into one portion.

Wet the baking tin. Pour in the two portions in layers, then run a skewer or butter knife through all the layers right down to the bottom of the tin to create colourful swirls. Leave to cool in the tin, then cover and chill in the fridge for 3-4 hours until completely set before serving. This is a coffee-flavoured version of those delectable and pretty apam puteri ayu. To save time, make the sponge in a large pudding container instead of the usual mini fluted ring moulds.

Then, for an extra hit of caffeine, how about serving it with the Internet’s current favourite drink, Indian cappuccino aka beaten coffee aka Dalgona coffee?

Combine grated coconut, salt and corn starch in a small bowl. Set aside

Dissolve coffee powder in boiling water. Set aside to cool.

Beat eggs and sugar together until mixture is pale and fluffy.

Stir together flour and baking powder. Sift one-third of the flour over the egg mixture. Gently fold in to combine.

Fold in the coffee mixture. Sift another one-third of the flour onto the mixture and fold in.

Stir in half the coconut milk. Sift over the remaining flour and fold in. Fold in the fruit salt.

Spoon the coconut mixture into the prepared mould. Press into the base evenly. Place in the steamer and cook for 2 minutes.

Take the lid off the steamer and pour the sponge batter over the coconut layer. If using several smaller moulds, divide the batter evenly.

Put the lid back on and steam over medium heat: 22 minutes for a large mould; 15 minutes for smaller moulds.

Transfer sponge to a cooling rack and remove immediately from the mould to prevent sticking.

*Fresh coconut can be replaced with desiccated coconut, although the texture will be different. Use 75g of dry coconut and moisten it with 2 tbsp coconut milk. 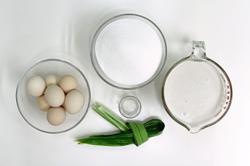 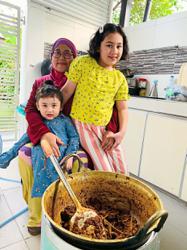