Leaping with joy over British classic

What better way to celebrate this day that only comes once every four years than to make toad in the hole.

Anyone who has ever lived in the UK would be familiar with this quintessentially British fare.

It is basically Yorkshire pudding with a sausage inside, originally created to stretch out meat in poor households.

Despite its name, there is no toad in the pudding.

The dish just resembles a toad peeping out of its burrow.

Yorkshire pudding is traditionally eaten with roast beef, using the drippings from the roasting pan and served with onion gravy and vegetables.

But if you add sausages or meat into the batter, it is tasty enough to eat on its own.

To cater for vegetarians, we have created a mushroom version, calling it toadstool in the hole.

The most important step in making the puffiest Yorkshire pudding is a super hot oven.

The oven needs to be preheated to its highest temperature, 250°C to 350°C, depending on its make.

Then the oil in the muffin tin needs to be heated in the oven until it reaches its smoking point.

Be sure to place the tin on a baking tray to catch any oil spillage.When the oven is up to temperature, open the oven door and carefully slide the tin and tray halfway out.

Quickly fill each well with the batter and stuff with a sausage or a mushroom, making sure that it is submerged into the batter or it will float and fall out of its “hole”.

Then pop them back into the oven and keep the door shut.

Allow the batter to bake at least 15 minutes so that it crisps up and holds its shape.

If you prefer a crispier Yorkie, bake for an additional five minutes at 250°C and no more.

For a soft and fluffy inside, take it out when it just turns crispy and golden on the outside.

Eat it on its own, or serve it with mashed potatoes and gravy, and a side dish of green beans or baked beans.

Toad in the hole

a pinch of salt

1. Whisk eggs, milk, flour and salt in mixing bowl until well mixed. Strain batter with a wire sieve and put aside to rest for at least 30 minutes.

3. Open the oven door and slide the cookie tray with the muffin tin out halfway. Quickly fill each muffin well with batter. Push a sausage into six of the wells and a mushroom into the other six wells, making sure that they are submerged in the batter.

4. Immediately slide the tin back into the oven and bake for 15 minutes. Do not open the oven door or the Yorkshire pudding will sink.

5. After 15 minutes, the Yorkies will be golden and crispy on the outside, and soft and fluffy inside. Remove from oven and serve immediately.

Toad in the hole 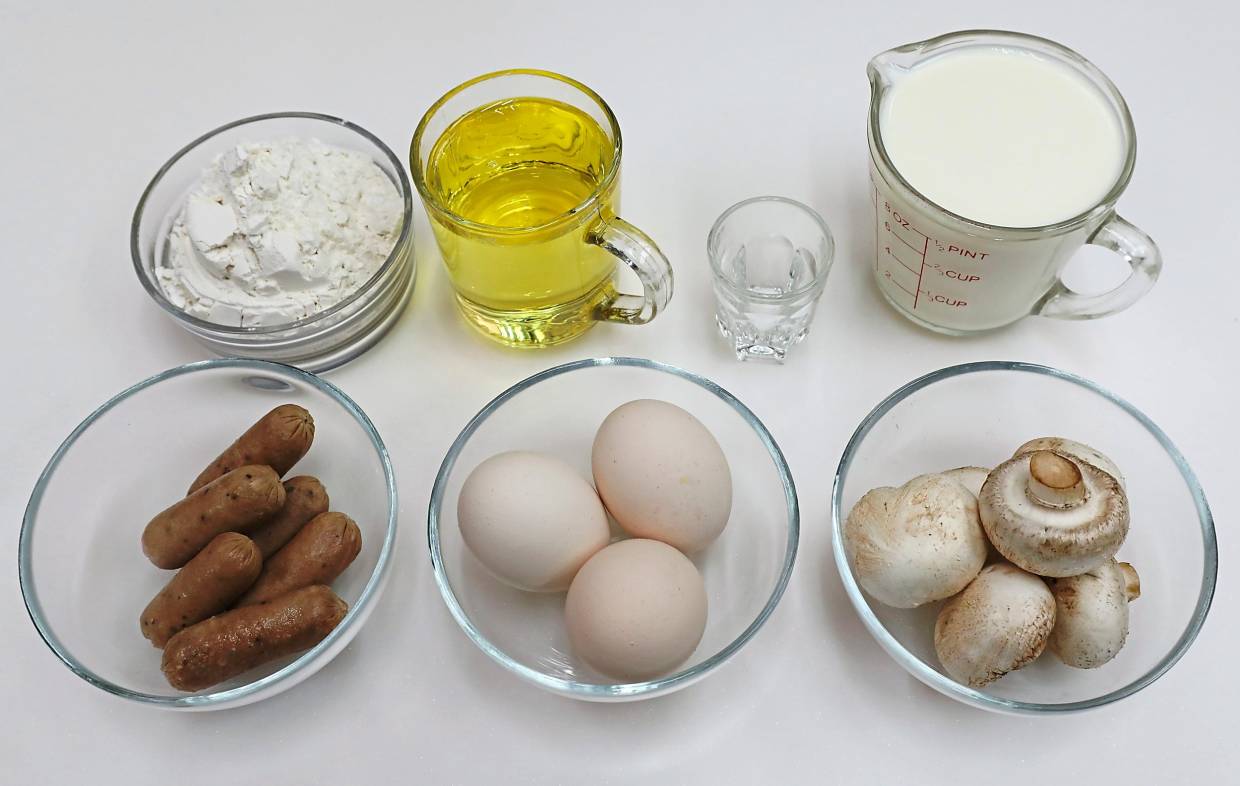 Toad in the hole is basically Yorkshire pudding filled with a sausage or mushroom.

The key ingredient for toad in the hole is usually a cocktail sausage, but mushrooms can be used in a vegetarian version. — Photos: SAMUEL ONG/The Star

Heat the oil and pan in the oven until it is smoking hot before filling with Yorkshire pudding batter.

Toad in the hole is basically Yorkshire pudding filled with a sausage or mushroom.