Festive dishes made with finesse

THE Mandarin character for “fresh” (xian) is made up of two other characters which are fish (yu) and lamb (yang).

Incorporating that in an actual dish like the braised lamb and Dragon Garoupa soup was something I never thought possible.

I was first introduced to the concept after watching a Hong Kong drama A Taste of Love and had thought such a combination was purely fictional.

However, Chuai Heng Restaurant banquet chef Liew San Woei, who cooked the dish, pointed out that it was a famous Shunde delicacy in China which is popular during winter.

“I braised the lamb and fish soup separately before mixing it together, ” he said.

Both types of meat harmonised well, unleashing a unique flavour.

The distinctive aroma of the lamb was not too overwhelming but gradually, the sweetness of the fish began to shine, leaving a delicious aftertaste.

The huge chunk of fish that was lightly fried to golden brown first to hold the flesh together, made eating it more pleasurable. Overall, it was two thumbs up for the dish.

Customers who order the special menu will get a complimentary bottle of red wine per table.

The restaurant will also feature some of their signature dishes and yee sang during this festive season.

Toss to a year of good health with the fruit yee sang that consists of julienned jackfruit, pear, apple, honeydew, mango as well as a generous serving of pomelo flesh, shredded carrots and radish with fried yam, potatoes and dried tangerine.

The sweetness of the plum sauce coating the Hong Kong crispy white fish made for a sweet and savoury combination.

Another highlight was the Charbroiled Pipa Spring Duck Drumstick.

Barbecue chef Danny Lee said the duck is marinated with cinnamon, Dong Quai or ginseng, star anise and bay leaves for a few hours before it is dried for another three hours.

“This dish is only available by reservation and it is one of the hot favourites among diners.

“The spring duck is small so most people enjoy the drumstick.

“I once roasted 380 spring duck for 760 customers during a wedding reception last year, ” he said.

Diners do not have to get their hands dirty as a small piece of aluminium foil was wrapped at the tip of the drumstick.

The thin layers of fat in between the glossy paper-like skin added flavours to the meat and diners can also dip it into a mellow spiced sauce.

The yam basket with “Kung Po” (cooked with dried chillies) prawns and squid is a common dish when eating out but Liew added a unique twist by turning the yam basket into yam balls.

“It is easier for diners to scoop the yam balls instead of crushing the basket which I find quite a hassle, ” Liew said.

This yam dish was able to showcase his culinary expertise as the dried chilli prawns and squid hit all the right notes.

Instead of the usual suckling pig, diners can try the charcoal barbecued Spanish pork ribs marinated with aromatic herbs. The dish with a slight Western touch was cooked to perfection.

The yee sang is priced from RM58++ onwards for half a portion or RM98++ for one portion.

There will also be roasted suckling pig, duck and goose for takeaway in conjunction with “Bai Tian Gong” or Jade Emperor Festival.

The restaurant is open for reunion dinner but closed on Jan 25, the first day of Chinese New Year. 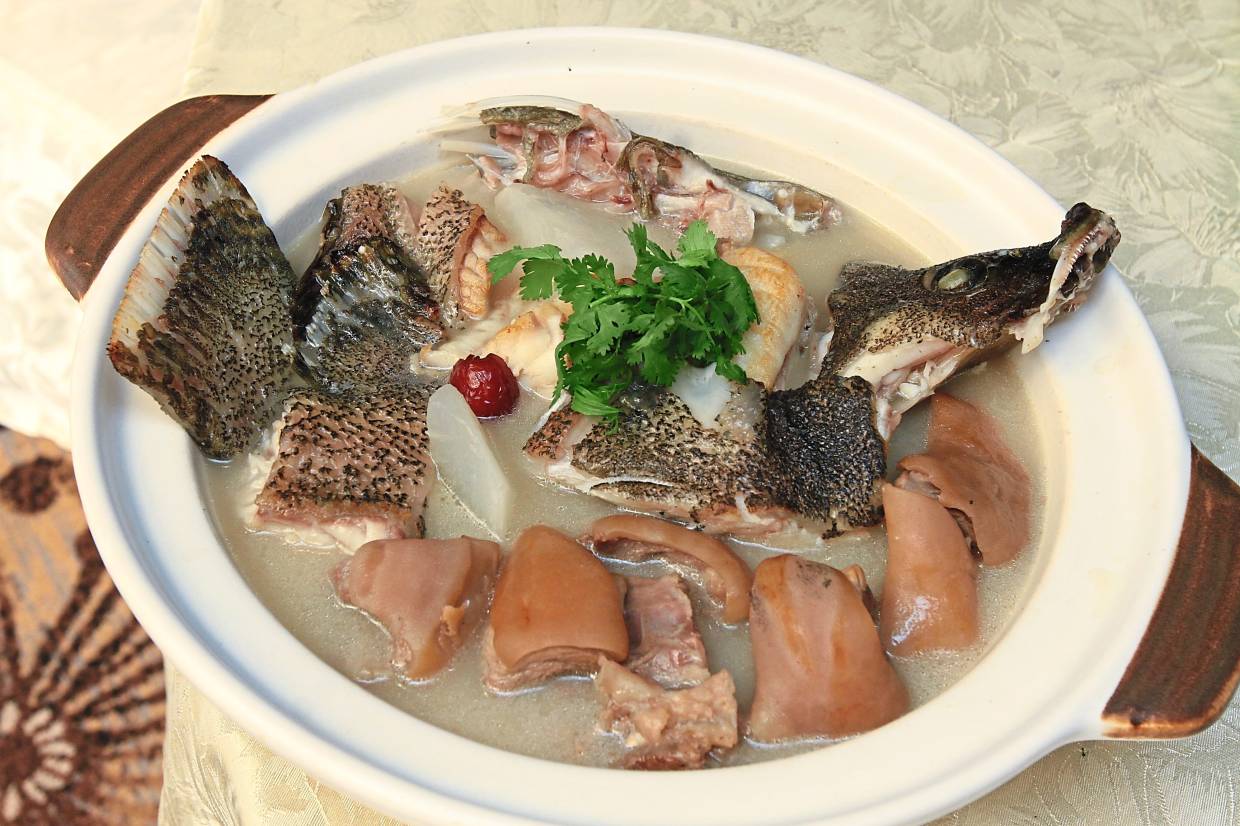 The charbroiled Pipa Spring Duck Drumstick is a favourite among diners,