Red-themed recipes to bring ong to the table

THERE are some really fascinating facts about the colour red. It is the oldest colour in history, having been around since neolithic times – scientists found that it was used a lot in cave paintings, and apparently even then, the ladies were dolling themselves up in red.

It is the first colour that humans perceive after black and white – when societies started labelling colours, the order in which almost all of them did it was black first, followed by white and third, red.

Red is the colour that babies see first before any other, and the first that those suffering from temporary colour blindness after brain injury start to see again.

In Asia, red symbolises good luck, prosperity, celebration and long life. It is, of course, a popular one when it comes to food. Although we use many naturally red foods in our cooking, we also like to colour our dishes, such as kuih, with red and its many shades.

Speaking of food, researchers at the University of Parma in Italy did a study some years ago with popcorn, chocolate and hand cream served on red, white and blue plates. They asked the participants in the experiment to rate the sweetness of the popcorn, the nuttiness of the chocolate and the creaminess of the hand cream (by touch, of course. Not by taste!). But what the scientists were actually doing was measuring how much of each of the substances were being consumed.

They found that the participants consumed less when they were given a red plate, which the scientists suggested was associated with “danger and prohibition”. However, they admitted that the study did not provide conclusive evidence — so don’t rush to replace all your flatware just yet!

Red certainly gets our attention. So, in conjunction with Chinese New Year, we put the colour front and centre on our plates with a few recipes to tempt the eyes and the appetite. This is the perfect dressing for Chinese dumplings, but is also great with fried rice, pasta, eggs and... well, everything!

In a large saucepan over medium high heat, toast the peppercorns, cinnamon bark and star anise until aromatic. Remove from pan.

Grind or pound the peppercorns into a powder. Place in a large heatproof bowl with the cinnamon bark and star anise.

Put the oil and garlic together in the saucepan. Turn on the heat to medium and start frying the garlic. Once the chips are golden, immediately remove from the oil and place in a bowl.

Add salt to taste. Add vinegar, a tablespoon at a time, and make adjustments to taste. Stir in the garlic chips, fried shallots, peanuts and sesame seeds. Store in an air-tight jar. Let the chilli crisp sit a day or two before eating (no need to refrigerate).

*Chinese black vinegar, popularly known as Chinkiang, is perfect for this recipe, but you can substitute it with another dark vinegar such as malt or balsamic. Turn leftover thoran into patties. I have to admit, I prefer the patties to the stir-fry. They have a delicious curry taste and the lentils add texture and body. Eat them with a preferred sauce or use them in vegetarian burgers.

Combine beetroot and grated coconut in a bowl.

Heat the oil in a pan and add mustard seeds. When they start to sputter, add the onion. Fry until translucent, then add green chillies and curry leaves (sprigs removed). Fry for 30 seconds, then add the beetroot, coconut and 1/2 tsp salt.

Toss together until combined, cover and cook over low heat, stirring occasionally, until the beetroot is tender. If the mixture starts sticking to the bottom of the pan, sprinkle in some water.

Remove the lid, and stir-fry for a few more minutes. Taste and adjust seasoning. Turn thoran into vegetarian patties! Combine 1 cup thoran with 1/2 cup cooked lentils/dal that have been lightly mashed, an egg and 2-3 tbsp tapioca or rice flour. Mix well. Form into patties, chill for 15 minutes, then cook in a frying pan with a little oil over medium heat until golden on both sides. 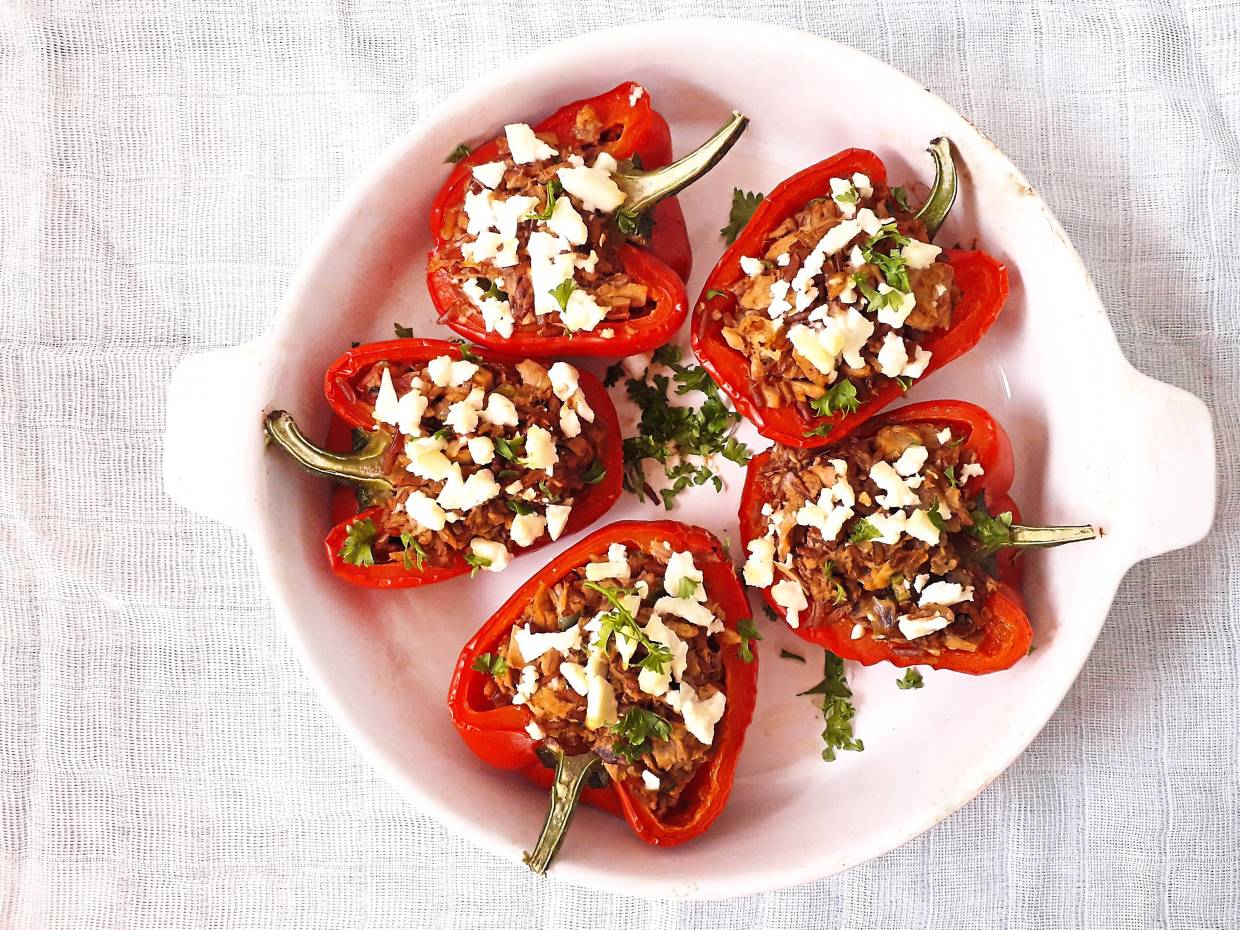 Use white rice if preferred, cooking it as preferred. To make this dish as ‘red’ as I could, I added the pink tuna, but omit it for a vegetarian version. The pepper halves are boiled briefly to soften them before they are stuffed. This cuts down the baking time considerably thus preventing the rice from drying out.

Wash the rice. Toss and place in a rice cooker with the gojuchang paste, salt and 11/4 cups water (or adjust quantity according to the type of red rice you use). Cook the rice.

Cut the peppers in half lengthways through the stems. Remove the seeds. Bring a large pot of water to the boil. Add the pepper halves and boil for 2-3 minutes until just pliable. Drain the peppers and set aside.

Heat oil in a frying pan. Add onions and garlic and cook for 5 minutes. Stir in the cooked rice, tuna and yoghurt. Season with salt and pepper to taste.

Preheat the oven to 180°C. Stuff the tuna-rice mixture into the pepper halves, mounding slightly (there will be some left over). Place peppers on a baking tray and top with feta. Bake for 10-15 minutes until feta has melted and peppers are warmed through. Sprinkle with parsley and serve. Whoopie pies are a cross between a cake and a cookie. They are two domed pieces of cake/cookie sandwiched with a cream filling. According to whatscookingamerica.net, these American sweets were created by the Pennsylvania Amish and were originally made from leftover chocolate cake batter.

Here, the chocolate batter is tinted red to make them red velvet whoopie pies. There is quite a large amount of food colouring, so don’t be shocked.

In a large mixing bowl, beat the butter and sugar together until blended. Add the egg and beat until the mixture is pale and light. Beat in the vanilla extract.

Fold in the dry ingredients. Combine the milk, vinegar and food gel and fold into the mixture until evenly blended. The dough should have a soft dropping consistency. Chill the dough for 15 minutes.

Preheat the oven to 170°C. Line 1-2 baking sheets (depending on the size of your oven) with grease-proof paper.

Place one-tablespoon scoops of dough 5cm apart on the baking sheet. Bake for 12-15 minutes, rotating the pans halfway through, until the cookies are risen and springy in the centre (they will spread out at first and then rise).

Remove from oven and transfer cookies to a wire rack to cool completely.

Hold back about 50g (or a few tablespoons) of the icing sugar and add the rest together with the salt to the cream cheese mixture.

Beat on low speed to combine, and then on high speed until smooth and creamy, 2-3 minutes. If the frosting is runny, add the rest of the icing sugar a tablespoon at a time.

*Do not use liquid food colouring as it will change the consistency of the batter. You want each cookie to rise in the middle, not spread out. Also, I have found that some liquid colourings have an unpleasant taste.

Exotic seafood jazzes up festive menus
Feast of festive delicacies
Auspicious CNY recipes from a chef with four decades of experience
CNY seafood recipes from a passionate 82-year-old chef
Golden roulade for festive meal
Eating your way to good fortune
Noma, one of the world's top restaurants, to close at the end of 2024
This year, eat your way through South-East Asia
Auspicious treats to usher in Year of the Water Rabbit
2023 food trends: Food delivery will continue to rise in Malaysia