The science of eating: how people make decisions about what to eat and drink

Our dining pleasures are not just about what we taste, but also about how our mind works. — 123rf.com

A few weeks ago, I was out at a restaurant with a friend. The music playing in the backround was of the fast, thumping variety and neither of us could hear much of what the other was saying. So we ended up eating rather quickly and heading somewhere much quieter for coffee and dessert.

I didn’t think much of this experience until I read Professor Charles Spence’s seminal book Gastrophysics: The New Science Of Eating.

Spence is a professor of experimental psychology and the head of the Crossmodal Research Laboratory at the University of Oxford. He is also the recipient of the Ig Nobel Prize for Nutrition for his sonic chip, which proved that people could be led to believe a chip was crispier and fresher than it actually was if they heard a louder crunching noise. Spence’s book says that much of what goes into people’s mouths is dictated by their minds.

Published in 2017, the book examines how various factors ranging from our senses to colours, textures, shapes, lighting and yes, the music in a restaurant, can influence what and how people eat and drink.

In Spence’s words, “The pleasures of the table reside in the mind, not in the mouth.”

What this essentially means is that the perceptions you have

about what you put in your mouth have a lot to do with what’s fed into your mind.

And while you may think you know how you arrived at your food decisions, a lot of things have probably subtly swayed or impacted those decisions – without you even knowing it.

Confused? Let’s break it down.

Gastrophysics merges gastronomy and psycho-physics (the study of perception) and is the “scientific study of those factors that influence our multisensory experience while tasting food and drink”.

Spence argues that tasting is largely a cerebral activity that is predicated on sensory cues that calibrate and can often skew people’s expectations of their food and drink experiences. The science behind eating is a multi-sensory approach that is devised based on how people respond to carefully calibrated sensory cues. — JOSHUA RAPPENEKER/Flickr

For example, did you know how much importance is placed on the name of an ingredient or a meal? In the book, Spence describes how changing the name of Patagonian toothfish to Chilean seabass in 1977 resulted in increased acceptance of the fish, summarised by sales increasing by over 1,000% (and rampant overfishing of a species which was previously difficult to sell).

The same logic can – and should – be applied to restaurant menus. Avoiding negative words like “sour” in favour of “tangy” can really change people’s perceptions of a meal.

“Choice of words definitely matter. Describing something as ‘sour’, versus ‘mildly acidic’ or ‘tangy’ would have a different effect in terms of getting people to imagine what they’re putting in their mouth and the choices they’re making, ” says Renyi Chin, co-founder of MyBurgerLab.

Jun Wong, the head chef of progressive Japanese restaurant Kikubari concurs with this and says, “You want to use words that people would find appetising, like ‘creamy’ or ‘oozing’ – that’s something that is likely to get them hungry.” Adding descriptors about the provenance of ingredients i.e. “free-range” or “organic” can also elevate someone’s experience of tasting a meal, according to Spence.

Having been presented this fact, some restaurants are now re-thinking how they present their food. Wong, for example, says, “We do a lot of organic and free-range food here, but we don’t mention it in our menu. We should probably promote it more as I do feel like these words have a feel-good factor.”

Interestingly, marketing a product as “low sugar” or “reduced fat” can conversely lead to people perceiving (often negative) changes in taste, something that some local F&B operators have also inadvertently discovered.

“When we don’t tell people that our cakes are gluten-free and refined sugar-free, they often say that they can’t tell the difference, ” agrees Tzi Hua Au, owner of Nourish by Kenny Hills Bakers.

Spence devotes large chunks of his book to the subject of senses – taste, smell, sight, sound and touch – all of which have an effect on people’s overall eating experience.

For example, Spence says that tasting something sweet will lead to more romantic feelings while tasting something bitter can lead to increased hostility. Curiously, his research has also shown that people in love will even rate water as tasting sweeter! Research has shown that some desserts seem to taste better when placed on a white plate, rather than a black plate. — Filepic

Chin (who has read Spence’s book in its entirety) has found that enticing smells emanating from the open kitchens of MyBurgerLab outlets have proven to be a particularly integral component to their success.

“All this while, what really worked for us that I think is part of the gastrophysics experience is having an open kitchen where you can smell what is cooking in the kitchen and again, that makes people develop their appetite. And it also helps with the dining experience because once you are hungry enough and you are waiting for the food and smelling it – it tastes better, ” he says.

This probably has to do with the fact that according to Spence, orthonasal – or external aromas from the environment – help the brain (olfactory receptors are an extension of the brain) form expectations of what the food will taste like and how much diners are likely to enjoy it. In short, if the food smells delicious, people already have heightened expectations.

But perhaps there is no stronger pull factor surrounding food than the sense of sight. Spence says that “some of the largest increases in cerebral blood flow occurs when a hungry brain is exposed to images of desirable foods”. For restaurant owners, tapping into people’s need for visually pleasing food is especially lucrative because Spence says people are willing to pay twice as much for the same food if it looks very appetising and they are also likely to find that it tastes better too.

Chin agrees that food needs to look good, especially with Instagram being such a popular social media tool. “You eat with your eyes first. So at MyBurgerLab, we make sure that the layering of the burgers is well thought out. So for example, with the lettuce, we make sure we don’t put too much of it too far out because otherwise it looks like a lettuce burger so it should peek out just enough so you can see a bit of the patty, a bit of the cheese – it’s just about layering it rather than simply throwing things together, ” enthuses Chin.

Another important sight component? Colours – which apparently can make or break a meal. Pink drinks are perceived to be sweet and more enticing.

For instance, Spence says people will rate a pink drink much sweeter than a green drink while hot chocolate is liked more when it is served from a plastic orange cup versus a white one.

Even the colour of a plate can drastically impact how people feel about a meal. Research conducted with the Alicia Foundation in Spain found that the same frozen strawberry mousse was rated as 10% sweeter and 15% more flavourful and was liked more when served on a white plate rather than a black plate – strange but true!

In other ways, it would seem that seeing really is believing. For example, if a restaurant uses larges plates, people’s natural reaction is to eat 40% more whereas reducing the size of the plate or bowl reduces caloric intake by roughly 10% (or 160 calories). Holding a warm bowl can make the people around you seem friendlier. — 123rf.com

In terms of the sense of touch, many things can affect people’s eating experiences. At a fancy restaurant, eating with heavier cutlery has consequently led to people thinking the plating is nicer while the tactile act of holding a warm cup or bowl can even induce the people around you to appear friendlier.

You might not know this, but your favourite restaurants could be rushing you through your meals.

In a 1986 study conducted American professor R.E. Milliman, tempo was assessed in a medium-sized eatery and it was discovered that diners ate much faster when fast instrumental music was played. When slow music was played, they spent 10 minutes longer eating.

Spence also cites a 2012 study published in Popular Science which found that when music in a bar gets 22% louder, people drink 26% faster. What people eat when they go out is often determined by unseen factors like the cutlery used, music played and even the furniture in the eatery. — Filepic

Chin admits that he has applied this philosophy in MyBurgerLab outlets, as theirs is a fast-casual concept which relies on people eating and leaving without lingering for too long.

“We play something a little bit more upbeat generally, it can be seen as pop-ish generally but we do find that a little bit more uptempo music does – at least in theory – help with the flow of the customers. Because our intention is for people to eat and go and not stay for so long, ” he says.

As irrelevant as it may seem, lighting can also play a strong role in rousing appetites. A 2012 study published in the Journal Of Literature And Art Studies found that yellow lighting increases people’s appetites while blue and red lighting is likely to have the opposite effect. Research shows that people dining at an Italian restaurant will rate the food as more authentic if it looks more Italian. — David Ohmer/Flickr

Even the look of a restaurant can change the way people feel about the food. A 1994 study found that just by changing the look of an Italian restaurant, people felt differently about its authenticity. When the restaurant looked conventionally plain, 37% of the pasta items were rated as authentic versus 76% when the restaurant was given a more Italian look, replete with Italian flag and red-and-white chequered tableclothes.

“Given results like these, you can probably understand why gastrophysicists are often so skeptical of people’s subjective reports. Better to look at what people do, rather than merely relying on what they say, ” says Spence.

Although gastrophysics can be extremely useful in determining why people eat what they eat, cultural differences can abound in some of these results.

The smell of durian, for example, is likely to be both familiar and beloved in South-East Asia but in Paris, a woman making sambal belacan reportedly found police at her doorstep because neighbours had thought the smell was akin to a rotting corpse! 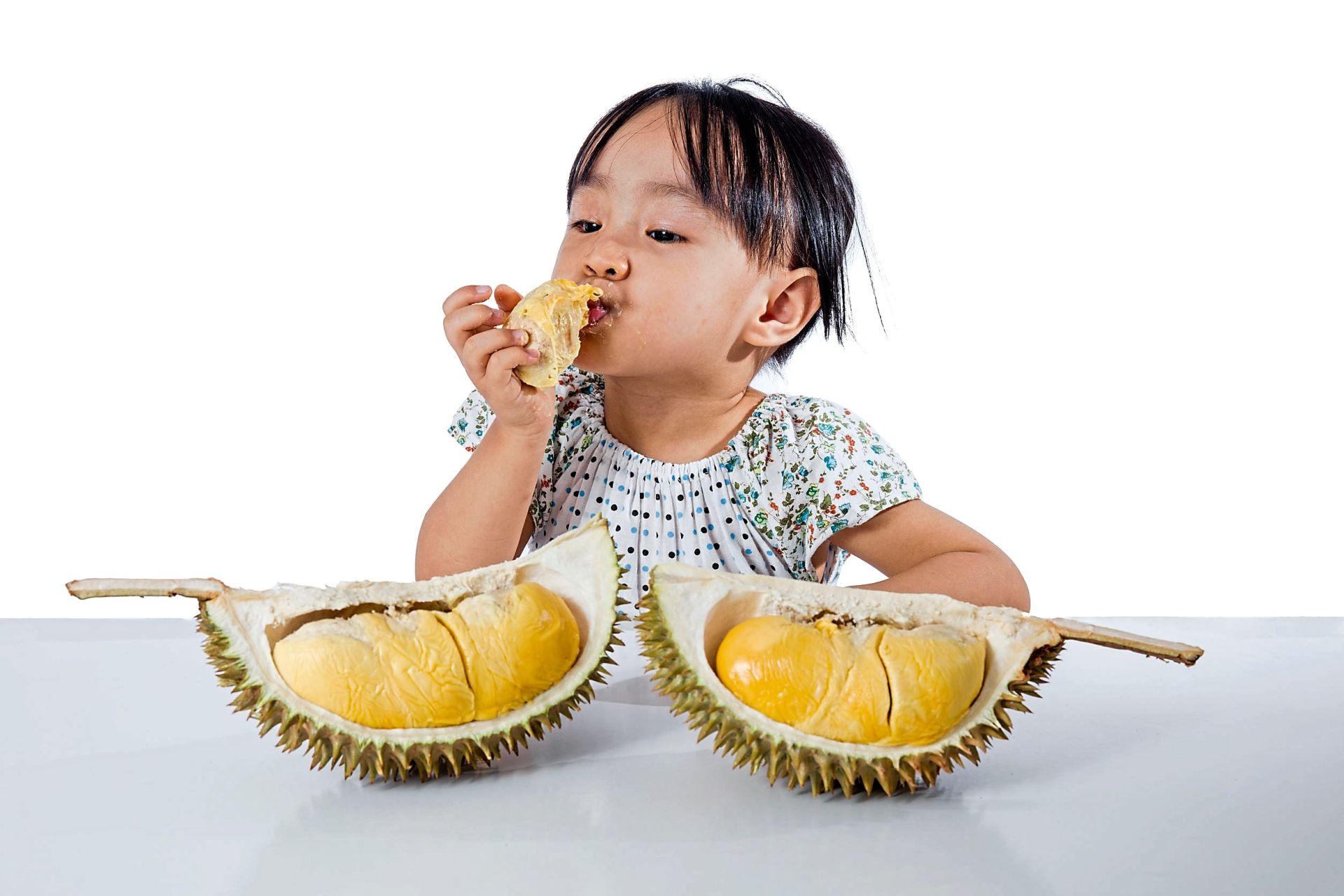 The smell of durian can be very welcome in South-East Asia but repugnant in some other parts of the world. — 123rf.com

Spence himself alludes to this, saying, “While everyone’s brains uses the same rules to combine the senses, which particular combination of tastes and smells gives rise to the enhancement or suppression of flavour depends on the food culture that the person has grown up in.”

Chin says he too has noticed this even with his brand’s burgers.

“We have a new rojak burger, and not everyone is a fan of prawn paste, so we have Caucasian customers who have found it a little bit too pungent whereas we also had Thai friends who came and had the burger and said, ‘My God, this reminds me so much of a Thai dish.’ So yeah, definitely our background and culture plays into gastrophysics, ” he says.