Curious Cook: What is bugging meat?

The proportion of chickens with P50 increased from 15% to 41%. — SHANNON MCGEE/Flickr

A little-known guideline from the World Health Organisation (WHO) in late 2017 strongly recommended that use of antimicrobials be curtailed significantly in the meat production and dairy industries.

Earlier in 2015, the WHO had also developed the Global Antimicrobial Resistance Surveillance System (GLASS) to monitor the spread of bacteria which are developing resistance to antimicrobials in humans. However, no comparable initiative was developed for livestock animals.

The lack of public awareness of this important 2017 guideline is probably due to the constant hype about animal proteins at around the same time; for example, the keto diet was then strongly promoted as a method to lose weight quickly, though it is seldom mentioned that (1) long-term compliance with a keto diet is generally low, (2) any weight loss will likely return relatively quickly after stopping the diet, (3) over-adherence to the diet can cause health issues due to lack of nutrients, (4) the long-term effects are not understood and vary from person to person, and (5) eating mainly high fat and protein foods can be expensive.

Whatever the reason, in 2018, the world produced the highest amount of meat in history; around 330.51 million metric tonnes was produced, which equates to roughly 44kg of meat for every single person living on the planet. This immense amount of meat production is almost certainly going to be exceeded in 2019 – and therein lies the important issue behind the WHO’s guideline.

The premise is simple. Producing a commodity such as meat at such immense densities and quantities necessarily requires large scale usage of compounds to counteract diseases; this is simply required to ensure that livestock is healthy, or at least, healthy long enough to get slaughtered and transformed into meat and meat products for sale.

Many such compounds are antimicrobials, and currently around 3/4 of all antimicrobials produced in the world are used for veterinary or livestock maintenance purposes.

An alarming number of antimicrobials used in meat production is also used to treat human diseases and it is already known many strains of bacteria can develop defences and resistance to these compounds. This effect is called Antimicrobial Resistance (AMR) and it has already affected livestock around the world, causing varying degrees of concern.

A multi-national research paper, ‘Global trends in antimicrobial resistance in animals in low- and middle-income countries’ published recently in Sep 2019 confirms the worries of the WHO.

In 2017, the WHO had already observed and catalogued incidents of AMR; for example, an earlier Canadian investigation into antimicrobial compounds called cephalosporins used on chickens found that restriction of the use of this compound reduced the prevalence of AMR to cephalosporins in humans. In 2018, the world produced the highest amount of meat in history. — DONALD JUDGE/Flickr

The 2019 ‘Global trends’ paper does not paint a pretty picture, even though its coverage is limited to 901 surveys conducted in meat-producing locations around the world. But first, let us review a little history about antibiotics.

The first known antibiotic was arsphenamine which was used to treat syphilis. It was discovered in 1909 by a German physician, Paul Ehrlich. The most famous antibiotic discovery was made in 1928 by Alexander Fleming after he had accidentally contaminated a culture dish of Staphylococcus bacteria with the fungus Penicillium notatum.

However, it took several more years before the active compound, penicillin, could be extracted in commercial quantities, but eventually this hurdle was overcome by Howard Florey and Ernst Chain at Oxford and penicillin became the world’s first mass antibiotic. In 1945, Howard Florey, Ernst Chain and Alexander Fleming all received the Nobel Prize for Medicine.

Antimicrobials are classified according to (i) spectrum of activity, (ii) effect on bacteria, and (iii) mode of operation/attack.

Antimicrobials with a wide spectrum of activity against many types of micro-organisms are known as “broad spectrum antimicrobials”. Some examples are tetracyclines, phenicols, fluoroquinolones, cephalosporins, etc.

“Narrow spectrum antimicrobials” are used to target only specific micro-organisms. Examples are glycopeptides and bacitracin, which affect only certain Gram-positive bacteria, whereas polymixins work only against certain Gram-negative bacteria.

Some antimicrobials are “bactericidal” compounds, which mean they target and kill target micro-organisms. Common examples are aminoglycosides, cephalosporins, penicillins, and quinolones.

Other antimicrobials are “bacteriostatic” compounds, which inhibit or delay micro-organism growth or propagation. Some examples are tetracyclines, sulfonamides, and macrolides.

It can now be understood why bacteria developing AMR can be a real problem, primarily because the range of antimicrobial compounds is so limited. If, for example, a pathogen (bad bacteria) can only be destroyed by a specific antimicrobial targeting nucleic acid synthesis, then any resistance to the antimicrobial means there are no other options available for countering the pathogen as all the other modes of operation would not affect the pathogen.

Returning to the 2019 Global Trends paper, it studied only four specific bacteria found in livestock, namely Escherichia coli, Campylobacter, non-typhoidal Salmonella, and Staphylococcus aureus. It then determined whether pathogens existed in livestock which exhibited AMR greater than 50% to the supplied antimicrobials, a measure called P50. 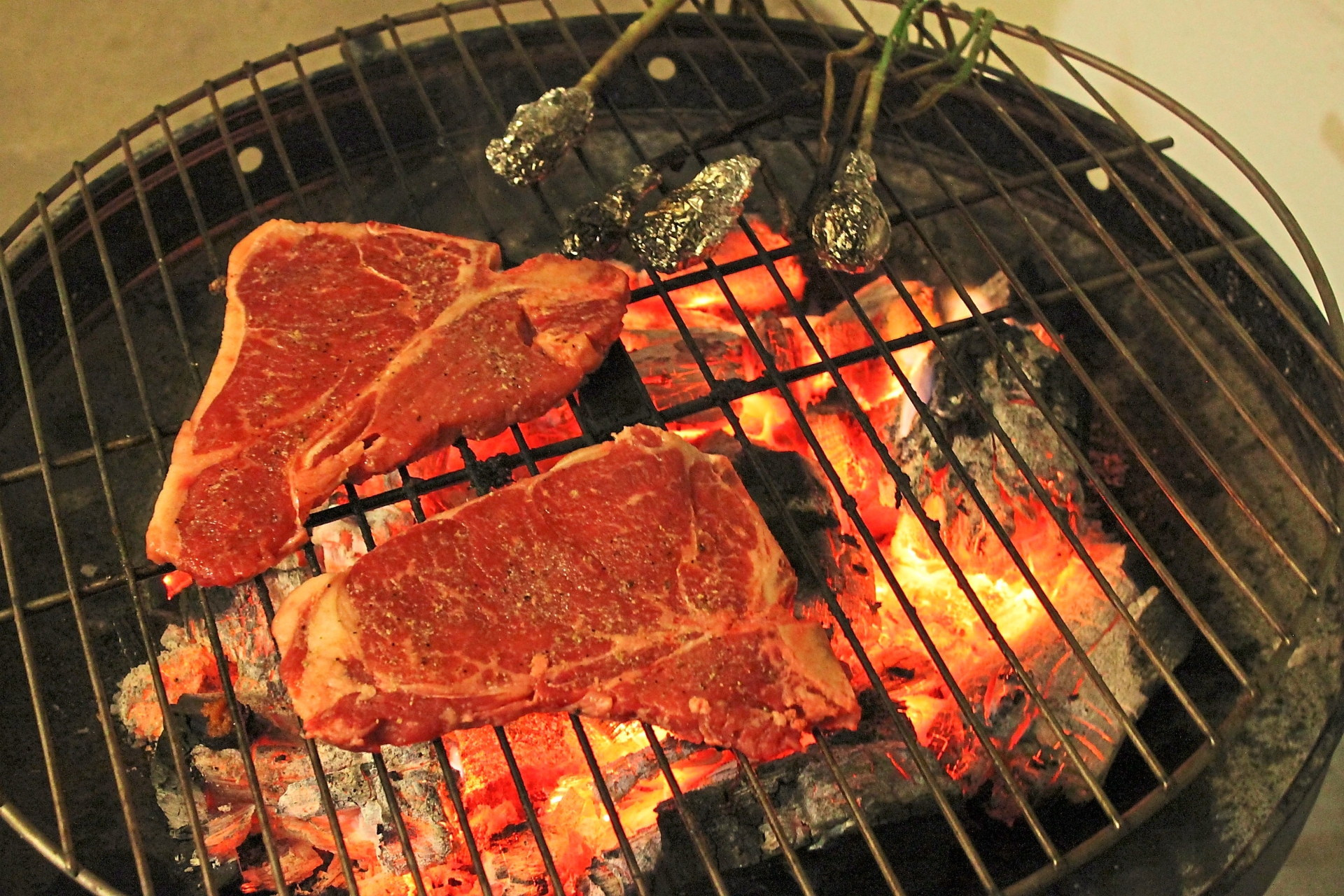 The columnist recommends that all meat be cooked to at least 62°C internally and/or held at that temperature for at least 10 mins to avoid getting sick. — GABRIEL SALDANA/Flickr

In lower to middle-income countries (LMIC), it was found that from the year 2000 to 2018, the proportion of chickens with P50 increased from 15% to 41%, from 13% to 34% in pigs, and from 12% to 23% in cattle. P50 is growing at an annual rate of 1.5% for chickens and 1.3% for pigs, and is worrying as livestock pathogens are demonstrating resistance to antimicrobials used for humans, such as tetracyclines, sulfonamides, penicillins, ciprofloxacin and erythromycin.

In short, consuming improperly-cooked meats from certain locations can not only make people very sick, but it can also ensure that there are no effective antimicrobials usable for treating the illness.

The study is not comprehensive enough to cover all the potential investigative options; only four bacterial strains were assessed, not every antimicrobial was analysed, not all the data is usable, and 901 locations is not enough to paint a full global picture. Nevertheless, even within these limitations, the conclusions are sobering.

The report suggests that LMICs are far more likely to have AMR hotspots; this means that consuming meat in certain countries is inherently more risky.

Additionally, it is recommended that areas with high AMR rates should take action to reduce the use of antimicrobials to preserve the efficacy of the compounds and also to reduce the risk of transmitting AMR pathogens to humans. Perhaps a return to sustainable farming methods can also be adopted in such areas.

As to what one can do at home, one suggestion is to ensure that all meat is always cooked to at least 62°C internally and/or held at that temperature for at least 10 mins. Keep kitchen surfaces clean and do not handle raw meat or their wrappings with fingers or implements which can contaminate other foods. A better, healthier alternative may be to adopt a diet with no animal proteins as it is highly unlikely AMR pathogens are found in non-meat foods.