Nothing spells hedonism quite like the word “dessert”. Long the flag-bearer of complete indulgence, a dessert is sweet, decadent and unquestionably designed to seduce the senses – in short, it’s the perfect denoument to a good meal.

Interestingly, a small but growing number of intrepid entrepreneurs are rising to the challenge of producing these alternative gluten-free, reduced sugar, refined sugar-free, dairy-free desserts.

Sweet Escape by Inside Scoop

Tucked along a row of shoplots in Taman Tun Dr Ismail is Sweet Escape. The cafe is the brainchild of Edmund Tan and Lim Shiew Li, the same enterprising folk behind popular local ice-cream brand Inside Scoop.

Inside Scoop has been a major hit since it first launched six years ago. The brand now has outlets peppered all over the Klang Valley and is constantly inundated with KL-ites enamoured with their sweet, creamy concoctions. Tan (left) and Lim decided to open Sweet Escape after getting requests for more low sugar ice-creams from customers who came to Inside Scoop. — LOW LAY PHON/The Star

It is why Sweet Escape’s mere existence marks a somewhat drastic pivot for Tan and Lim.

“Over time, as Inside Scoop grew, we have had a lot of people walking through our doors saying ‘Oh, I really like your ice cream but I can’t have it as often as I would like’. And we also had some older folk who preferred their ice creams less sweet. And in certain neighbourhoods more than others, we saw the request for it – it generally came from people in the higher income group or lifestyle-conscious people who didn’t want such sweet ice cream, ” says Tan.

Increasingly convinced that there was a gap in the market for reduced sugar ice creams, Tan and Lim decided to create a whole new brand instead, opening Sweet Escape a few months ago.

At Sweet Escape, all the ice creams have about 25% less refined sugar than offerings at Inside Scoop. Taking it a step further, Tan and Lim even developed ice creams that incorporated sugar substitutes like agave syrup and stevia in lieu of refined sugar. 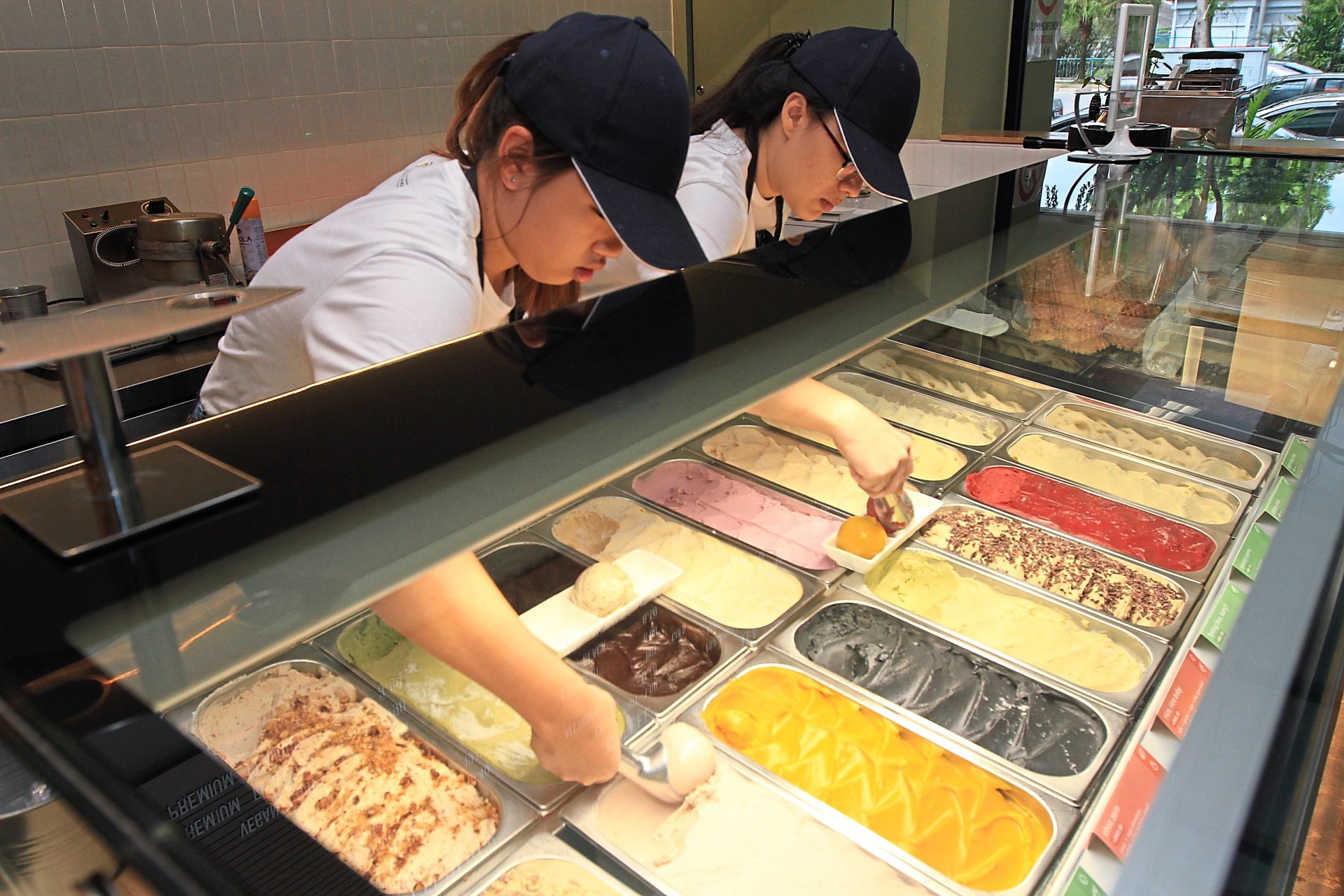 Aside from reducing the sugar levels in the ice-creams, Tan and Lim also experimented with nearly 20 sugar alternatives in a bid to substitute the refined sugar component in the ice-creams.

“We thought ‘How can we push this a little bit harder?’ So we started working with alternative sugars and experimented with about 12 or 15 different kinds of sugars. A lot didn’t make the cut because for ice cream specifically, sugar is a preserving agent and also gives it texture. So once you remove that, there are a lot of technical challenges. But in the end, we found that agave syrup, organic unrefined sugar and stevia met our requirements, ” says Tan.

Aside from cutting the sugar content and working with sugar substitutes, Tan and Lim also introduced dairy-free ice creams and one ice cream that has no sugar at all!

“At the extreme end, we have Choc Zero, a chocolate ice-cream that has zero sugar and is diabetic-friendly. It only has 51 calories for 100g, ” explains Tan. 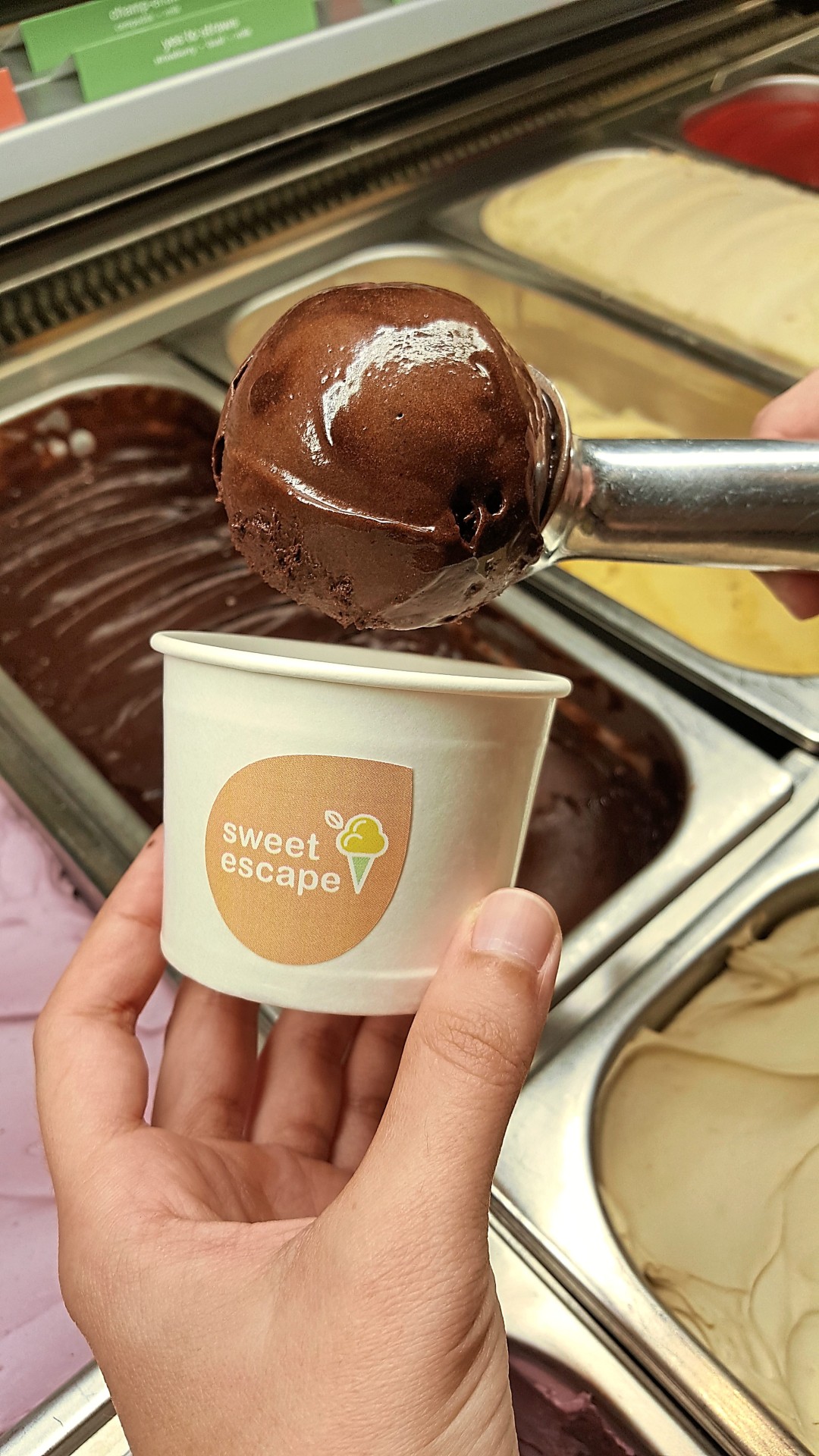 At Sweet Escape, you’ll find some ice-creams that are reduced sugar versions of products that already exist within the Inside Scoop stable – like hazelnut (called Hazel’s Nuts) and Valrhona chocolate (The Dark Side). Both ice-creams are creamy and rich and honestly, these imitation pieces are so akin to their predecessors, that it is hard to tell the difference (i.e. they did an amazing job of reducing the sugar without compromising on taste).

Other interesting options include Kurma Sutra, an ice-cream sweetened primarily with dates as well as Skinny King which is a luscious, durian-laced dairy-free

sorbet that is curiously more expensive than the brand’s traditional durian ice-cream.

Despite having successfully come up with a slew of reduced sugar ice-creams, Tan says it is an uphill battle coming up with new ice-creams under this brand as there are challenges aplenty. 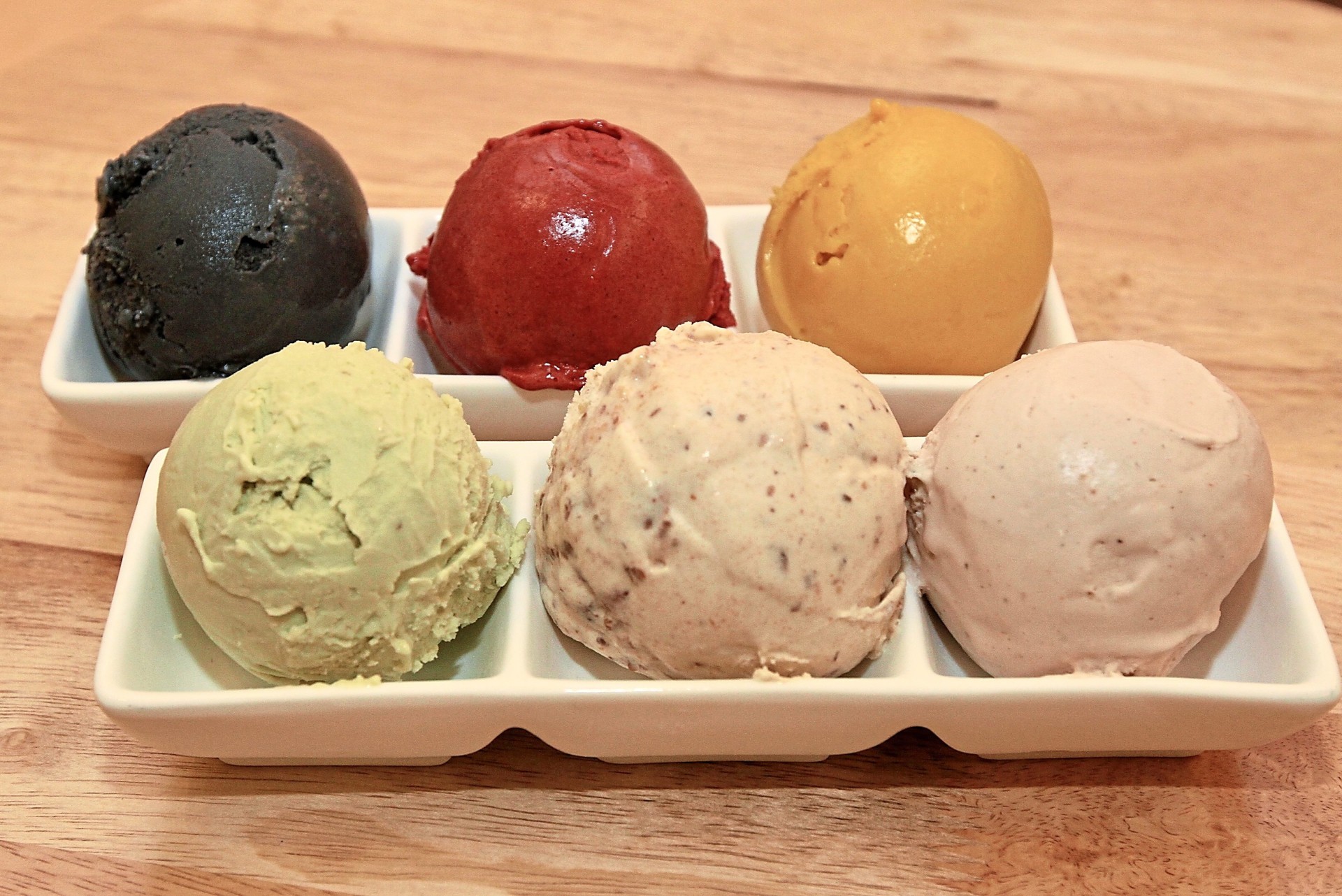 “Shiew Li does most of the product development and there is quite a bit of work involved when it comes to designing the ice-cream to be less sweet and more diet-friendly.

“Once you have the recipe, it’s fine, but during the R&D, there is a bit more back and forth, because the stability of a reduced sugar ice-cream is a bit different compared to an ice-cream made with more sugar.

“But we are very focused on the end product, if we have to cut the sugar and the end product isn’t as good, we wouldn’t serve it to customers, ” says Tan.

Since Sweet Escape opened, Tan and Lim say they have been surprised that contrary to their expectations, it is the typical Inside Scoop customers (read: young people) who have been thronging the ice-cream bar. “We thought it would be older people but it is the same demographic of customers that we typically get at the Inside Scoop, ” affirms Tan.

Moving forward, Tan and Lim are looking at developing more reduced sugar ice-creams as well as vegan ice-cream cakes, which they have been getting increasing requests for.

“At the moment, the demand is not that high but the people who want it really want it!” quips Lim.

On a sunny Thursday morning, Nourish is buzzing with activity. Tables are packed with people like Marion Taylor, who is here with a friend for a mid-morning treat.

“I have celiac disease, so I can’t eat anything with gluten. And I am so impressed with this place, I don’t think we have anything like this in Scotland where I’m from, ” says Taylor. 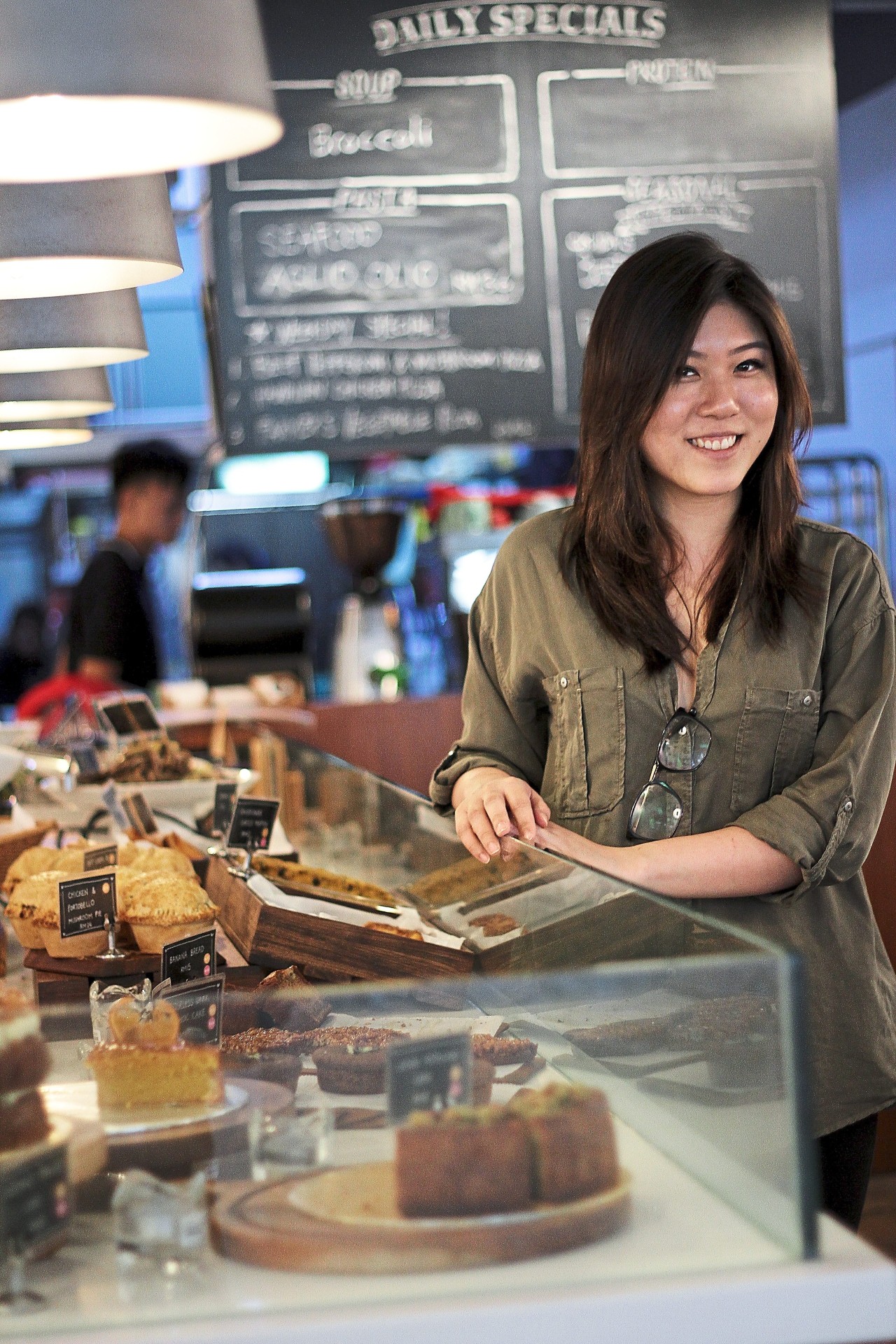 It was precisely because of people like Taylor and other customers looking for gluten-free, refined sugar-free desserts that Tzi Hua Au opened Nourish (which counts Kenny Hills Bakers as a sister restaurant) in the first place.

“How it started was I had a gluten intolerance that suddenly flared up. so because I had to cut out gluten, I had to find alternative ways to enjoy treats, so I started baking from home and then at the same time, coincidentally the demand for gluten-free products in Kenny Hills Baker in Bukit Tunku went up. People kept asking us – ‘Do you have anything gluten-free?’” says Tzi.

Spurred by this initial interest, Tzi and her team started producing gluten-free fare at Kenny Hills Bakers but quickly learnt that people with serious celiac disease often cannot eat desserts that are gluten-free if they are placed next to traditional desserts as this can cause their allergy to flare up. 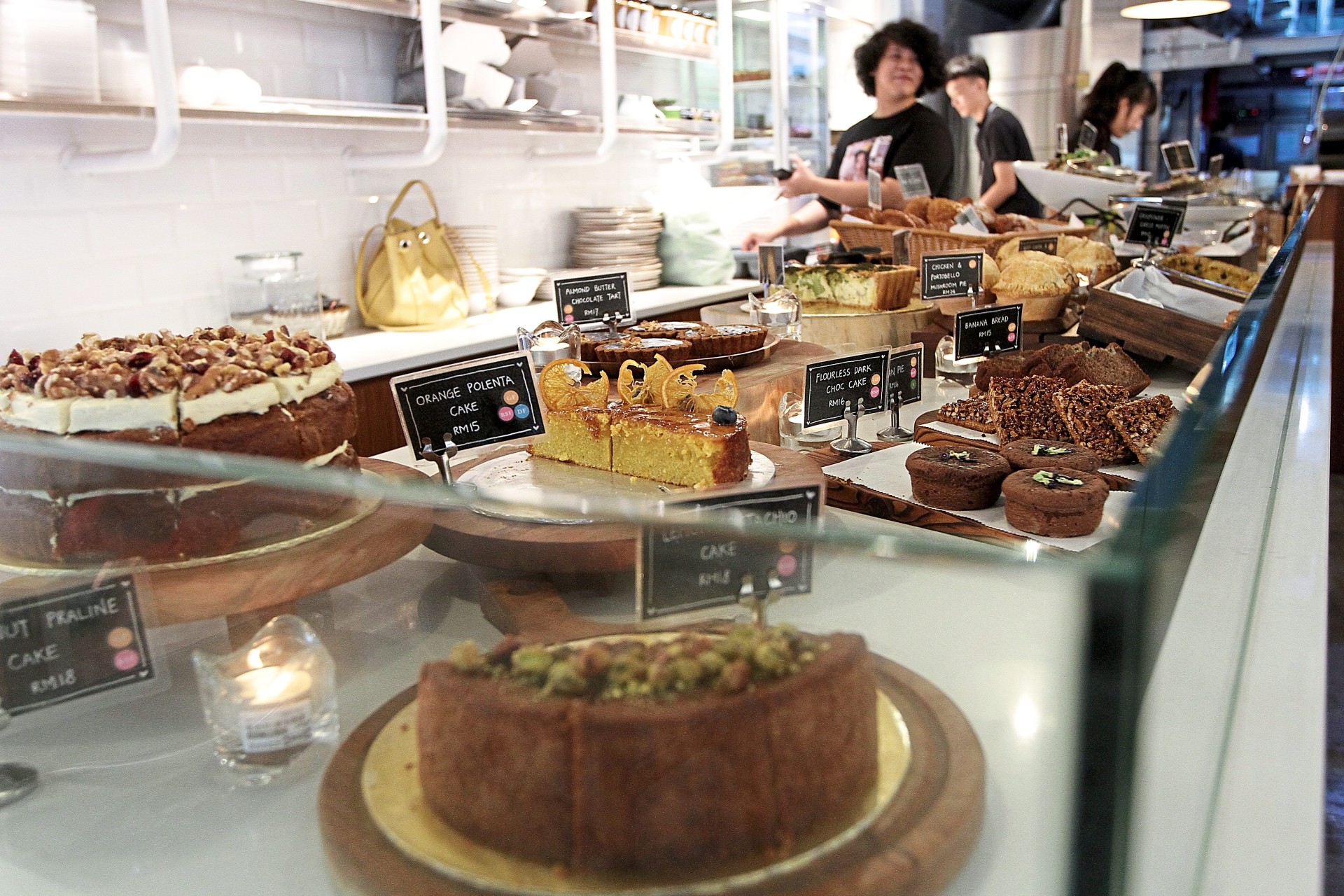 All the desserts at Nourish are gluten-free and refined sugar-free.

In tandem with that, Tzi was also fielding requests for low sugar desserts from customers. “We had people coming in asking us what the least sweet thing on the menu was, ” says Tzi.

Realising this demand for alternative desserts was something she could tap into, Tzi opened Nourish and began baking up a gluten-free, refined sugar-free storm.

She says that initially getting the recipes for each dessert was tricky as sugar substitutes and gluten-free flour respond differently in baking than the classic ingredients. But conversely, this also allowed for more opportunities for experimentation. 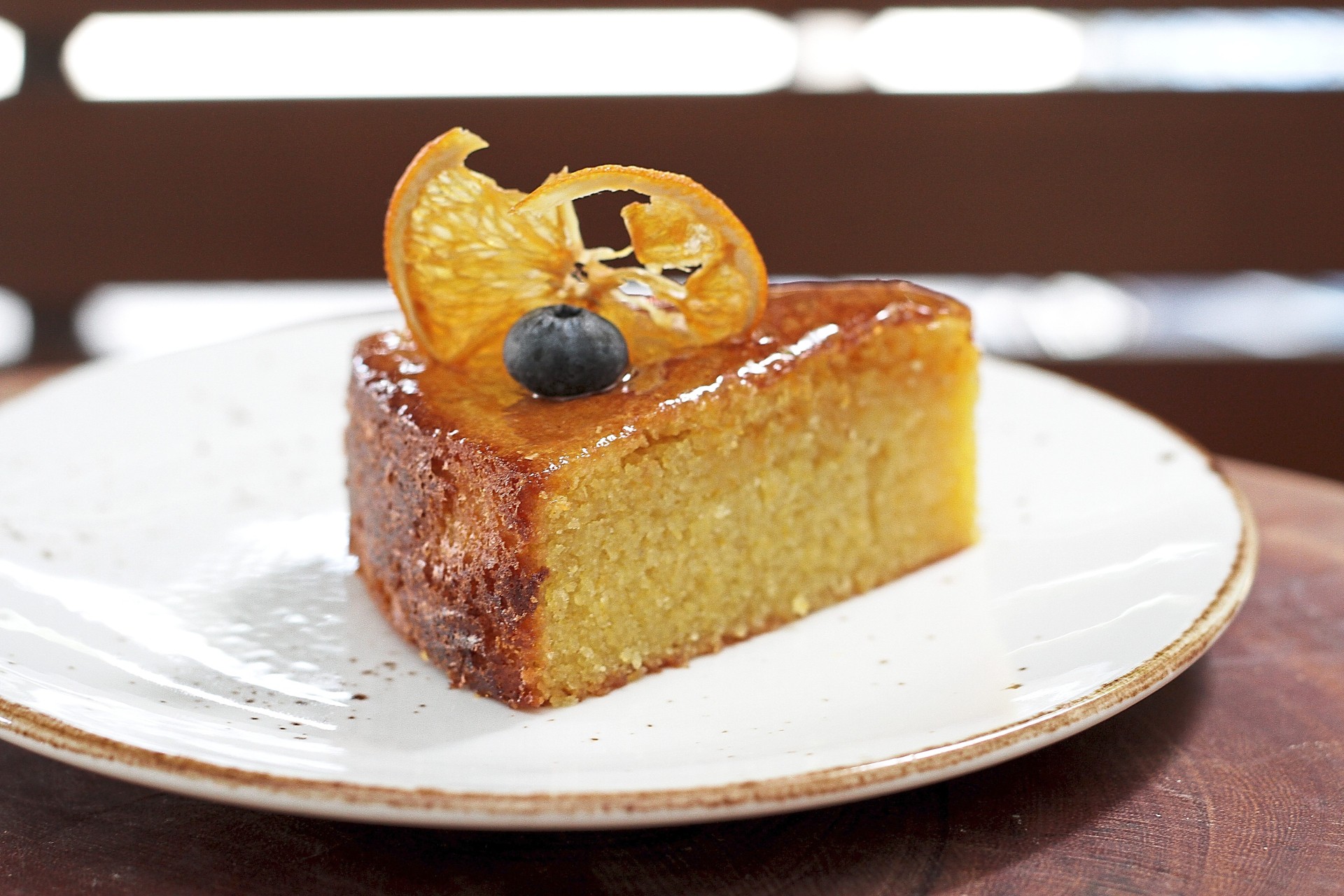 A take on a sugee cake, the orange polenta cake makes use of gluten-free polenta in place of semolina flour.

“It’s more about the texture because when you take out gluten, you lose the fluffy aspect. That’s why a lot of gluten-free breads are very dense, so it was about finding the right balance of flours.

“But I think gluten-free baking is more flexible than traditional baking, because instead of plain old all-purpose flour, you can use flours like almond flour, coconut flour and buckwheat flour and these different flours have different roles, so you can play around with the ratios, so it’s quite interesting, ” she says.

At Nourish, you can tuck into all sorts of relatively guilt-free treats including the house favourite pecan pie, a nutty, delightful concoction that is made using almond flour, coconut flour, pecans, coconut sugar and coconut oil.

Or the gluten-free strawberry tart and key lime tart, both of which offer rich fruity flavours complemented by an understated sweetness and a sublime gluten-free tart base.

Perhaps the most successful gluten-free dessert at Nourish so far is the decadently moist orange polenta cake, made using polenta in place of semolina flour.

“The orange polenta is the all-time best-seller. I think a lot of people don’t know what polenta is. When they taste it, they say ‘Oh, it’s like a sugee cake’, but polenta is like a gluten-free version of semolina (sugee) so we took that and twisted it, so instead of an orange sugee cake, you get an orange polenta cake, ” says Tzi.

Tzi says that while people looking for gluten-free, refined-sugar free desserts have been thrilled with what Nourish has to offer, equally she has also had to educate people who misguidedly believe that because the desserts are different, they don’t taste good.

“We actually found that in the beginning, when people heard ‘healthy desserts’, they were like ‘Oh no, it’s okay – I’ll skip that. But now a lot of people come in and if they don’t know that it’s gluten-free and refined sugar-free, they eat it and think it tastes fine. And then when we tell them, they’re like ‘Oh, we didn’t know, we couldn’t tell the difference’, ” says Tzi, obviously proud that people can’t differentiate her creations from traditional desserts. 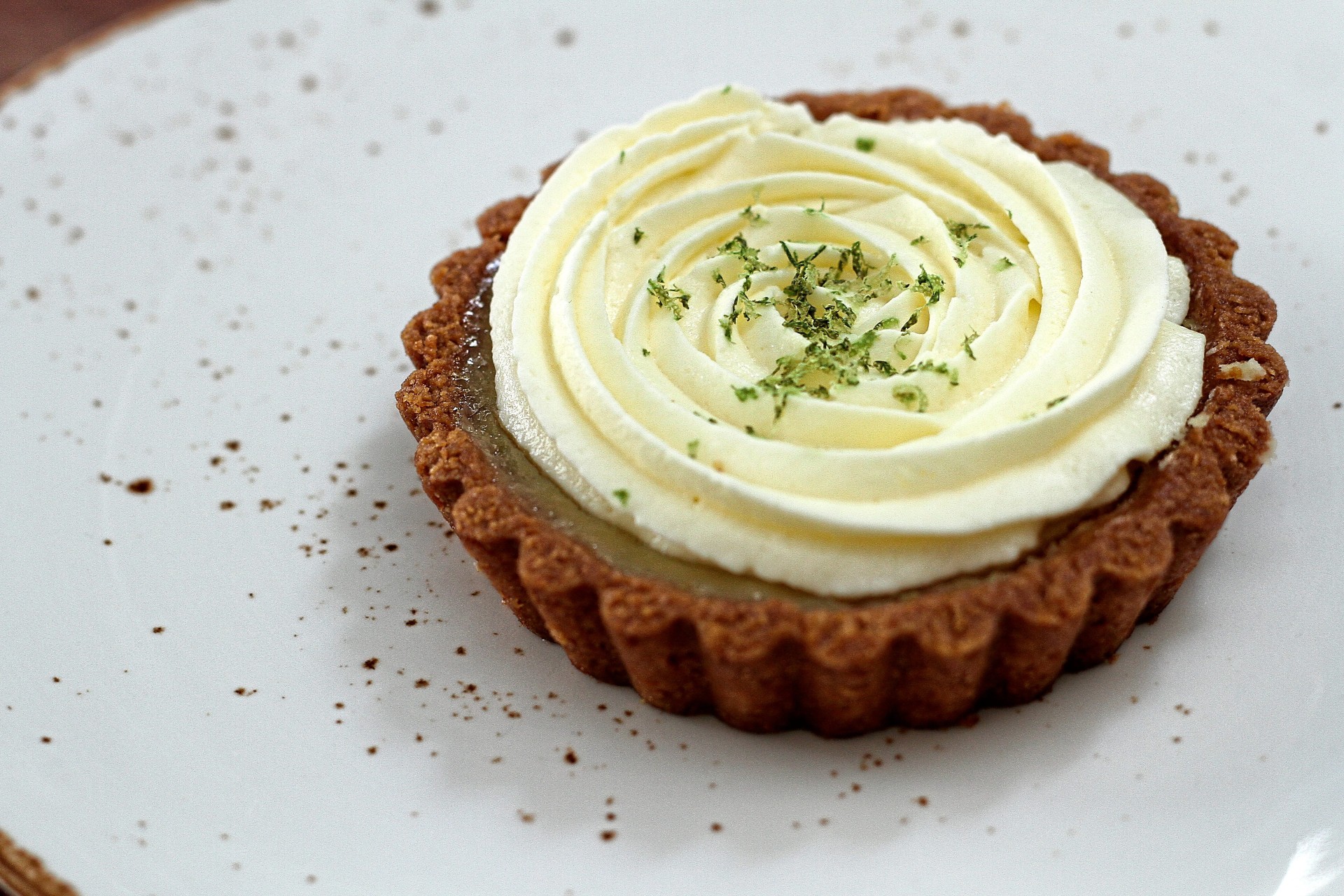 The key lime tart is a delightful, slightly astringent concoction that makes use of a gluten-free pie crust.

Since opening Nourish, Tzi says she has noticed an increase in the number of people coming in specifically to enjoy gluten-free, refined sugar-free treats.

“I think of the people looking for these desserts, about 60% have an intolerance and for 40% of them, it’s a health benefit. Both the expat community and locals are increasingly really into this and surprisingly, a lot of people come in to buy desserts for their children, ” she says.

Moving forward, Tzi is looking at developing egg-free cakes as she has been getting more requests for these treats.

“We get a lot of people asking if we have egg-free cakes. That’s quite a common request – many are people who can eat dairy, they just can’t take eggs. So we’ll slowly introduce these things, we have to perfect it first before we serve it in the cafe, ” she says. 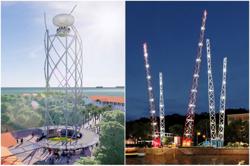