The ingredients for soy sauce chicken with potatoes.

CHICKEN with potatoes in soy sauce is considered comfort food in many Chinese homes.

Served piping hot over steamed rice, this dish is a reminder of what a home-cooked meal is supposed to be.

And every home has its own version of this dish.

Similar to ayam pongteh, the famous Melaka dish of chicken with potatoes and taucu, we cannot claim that it is pongteh because it lacks one key ingredient — gula melaka.

This recipe, hailing from Penang, is adapted from the Kuali archives.

It contains a few ingredients that home cooks from other parts of the country may not use, specifically spices and bamboo shoots.

Intrigued by the use of spices and bamboo shoots, I decided to try making this version although it is different from my family recipe.

It is always a challenge when using a recipe that I am not familiar with but I was quite relieved when our Penangite videographer Patrick Chin said it tasted authentic and reminded him of his hometown.

Do try this dish at home, and double or triple the recipe because it tastes even better the next day.

I cooked this dish again at home a few days later and ate leftovers straight from the fridge.

The gravy had melded into the chicken and potatoes, and I must say it really hits the spot.

¼ tsp salt or to taste

3) Marinate chicken with light soy sauce and pepper, and leave aside for 30 minutes.

5) Add in chicken and mushrooms and toss until the chicken changes colour.

6) Add mushroom infusion and bring to a boil.

7) Pour in combined sauce ingredients and coat in the sauce.

10) Thicken with cornstarch mixture and then serve with steamed rice. The ingredients for soy sauce chicken with potatoes.

The marinated chicken is slow-cooked to brown the meat slightly; ;

Potatoes are added into the pan

Soy sauce chicken with potatoes is a dish that goes well with rice.

There are many different versions of soy sauce chicken with potatoes. 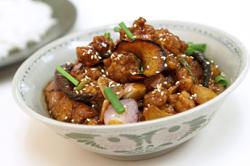