A NIGHT out with her then boyfriend Datsun Li inspired Emily Chen to start a steakhouse with him 13 years ago.

“He invited me to visit his hometown of Derby in England one day, ” said Chen, who stayed on in London after completing her studies.

Li and Chen went out for dinner in the quiet town but they could not find a restaurant that prepared steaks the way they liked them.“He was so disappointed and told me he could do better, so we went home and to prove his point, he served me really good steak, ” said the Penangite.

Chen had worked in several restaurants in London, but never once thought she would end up opening one herself.

After several sleepless nights and many rounds of discussion, Li and Chen decided to open their first steakhouse in Derby, so Li could be close to his parents who run a second generation fish and chips shop nearby.

“When we started, we could only fit 20 diners in our little shop but now we can accommodate about 60, ” she said, adding that Li assisted in designing the basic menu.

She visited slaughterhouses to understand where their steaks came from and determine which parts they wanted to use.

“In Derby, we use younger cows so the steak is tenderer but in Malaysia, we will be using Australian beef steaks, ” said Chen when met at her Kuala Lumpur restaurant, her second in Malaysia.

The 39-year-old said the couple’s vision was to keep everything as similar as possible to their restaurant in the UK so most of their ingredients, including dinnerware, were shipped in from England.

On the table was a bottle of sea salt for diners to season their dishes.

“This sea salt is from our Derby kitchen, because I can’t find a similar one here, ” she said, adding that the mustard and black pepper sauces were from there as well.

Chen said her steaks were lightly seasoned compared to other restaurants.

“When locals ask us why the steaks and chips have no flavour, we explain to them that this is the UK style.

“If you want heavy seasoning and marinade, then you have to go elsewhere, ” she said, adding that she wants her customers to appreciate the taste of the meat.

For steak lovers, she recommended the medium rare option.

“Do not worry about blood oozing out, our steaks are all matured, ” she said.

Each dish is accompanied by a generous serving of chips and mashed peas.

“We do not serve fries here, only chips, just like how we prepare them in England, ” she said, adding that diners should try them with their homemade black pepper sauce, a recipe passed down from Li’s parents.

Besides the beef dishes, the restaurant also offers lamb, fish and prawn dishes.

For starters, there are Chen’s popular favourites such as Crab Pot with Artisan Toast, Salmon Parcels with English Garden Herbs, Lobster Tail Salad, and Breadcrumb Mushroom with Garlic Mayonnaise.

I added onion rings to my order because I was craving for it.

“Our onion rings are unlike any other, ” said Chen, who has another eatery in Penang which she opened early this year with her younger brother Ken Chen.

True to her words, the onion rings, served in the shape of a tower, were fried to perfection using minimal flour, cleverly preserving the sweetness of the onions.

For dessert, Chen’s Apple Crumble or Bread and Butter Pudding make a good end to dinner.

The restaurant is located on the ground floor of Sheraton Imperial Hotel, behind its lobby with an entrance facing Jalan Doraisamy. Diners can either park at the hotel or an open-air carpark nearby. 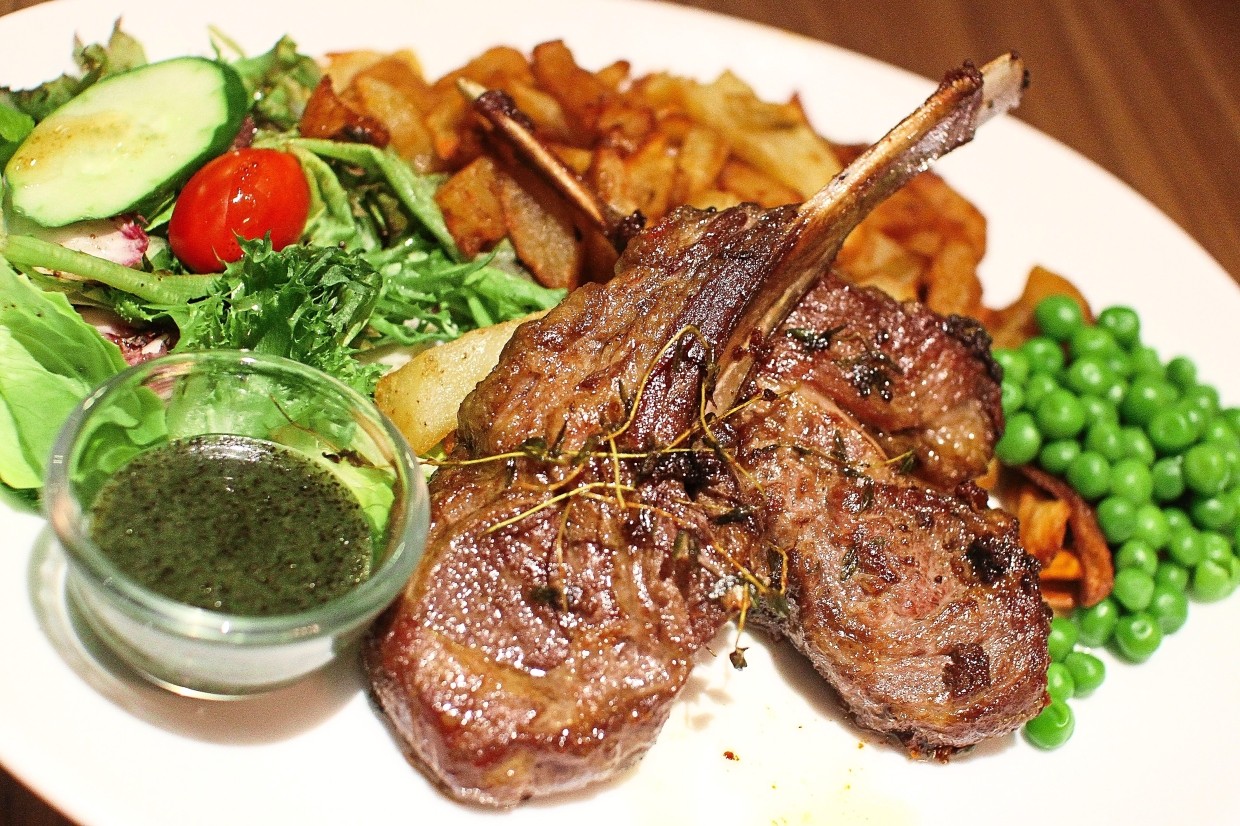 Chargrilled Rib-eye with chips, peas and side salad.

The Homemade Onion Rings here are unlike any other.

Chen’s very own version of apple crumble with a scoop of vanilla ice cream.