Curious Cook: All about meat

Different cuts of meat need to be cooked correctly otherwise they will end up tough. — BECERRA GOVEA/Pexels

As winter is here in France, I have now started switching to cooking warming meals to combat the cold, which I feel especially when taking my dog out for his daily walks. The problem is many traditional recipes from the local region require lengthy cooking, something which is wasteful of energy and time. For example, a simple (but delicious) Potée Auvergnate (a traditional pork stew dish) takes over seven hours to cook, according to a classic recipe.

As I did not want to spend a whole working day to prepare a meal, I thought of the best short cuts available to make such a dish, which will arrive at the same result (more or less). For a dish like Potée Auvergnate, the main problem would be cooking the meat quickly in a manner which delivers the same texture and flavour as a piece of meat cooked for several hours.

As the meat is thick chunks of semi-salted pork (and normally also pork trotters and tails), the requirement therefore is to apply some cooking technique which cooks the meat quickly but without turning it into the consistency and taste of either tough leather or soggy cardboard.

This, as it turns out, is not a simple problem to solve.

Anyone putting a lump of pork (or any other meat) in boiling water would know it just turns hard and tough after a few mins in the pan. To understand why this happens, one needs to be aware of the nature of meat proteins.

The secondary structure holds the protein in some arrangement along a polypeptide backbone. Usually this represents a simple spiral or helix with a single twist.

The tertiary structure is the 3-dimensional shape of a single protein, also often known as a polypeptide chain. This 3-D shape is the result of bending and folding the protein, and these bends and folds are held in position by various types of bonds, which act like dots of glue on the structure.

The most common bonds in proteins are hydrogen bonds, ionic bonds, disulphide linkages and dispersion forces. Discussion of how these bonds work is a long subject and probably not suited for a Sunday article.

The quaternary structure is the structure that arises when multiple different proteins join up together using the same types of bonding mechanisms as for the tertiary structure of single proteins. Such structures end up often looking like complex tangles when visualised.

However, these tangles are very far from random, and the specific combinations/structures of proteins is what make them functional. A classic example of a critical protein is haemoglobin, which is the molecule that transports oxygen throughout the body.

Why meat gets tough

There are several reasons why meat gets tough during cooking. The major reason is usually to do with the cut of meat used. Meat is muscle fibre and muscles which do the most work or bear the heaviest loads would tend to end up as tough pieces of meat after normal cooking. This would be because of the sheer density of the meat proteins which would be tough quaternary structures. However, there is still a way to make such cuts of meat edible. More on this later.

Better cuts of meat can still end up tough if cooked incorrectly. This is because of the nature of quaternary structure proteins. Meat would always get tender if the proteins are allowed to denature correctly, a process which involves loosening the quaternary structures of the proteins by applying the correct heat process and allowing either natural juices or cooking liquids to permeate the slackened protein structures. Rushing the cooking of meat can cause it to be tough. — YVONNE LEE HARIJANTO/Unsplash

However, rushing the cooking of meat often ends up causing the meat to toughen. This is because of the way proteins react to heat. The chemical reaction is called denaturation, where protein bonds are destroyed by heat and decompose back into broken strands and fragments of the original peptides/polypeptides. In theory, this should end up as softer meat, but it often does the opposite. And this is because of the physical, rather than chemical, reaction of meat proteins.

Under high heat, meat fibres simply tend to contract. This because meat is animal muscle, and muscles do only extension and contraction. This can be seen when frying a thin piece of bacon – the strip of meat curls up quite quickly in a hot pan due to the loss of moisture.

In a thicker piece of meat, all the proteins would shrink. This mass contraction pushes out the juices and other liquids in the meat, so one is left with a tough, shrunken, coagulated mass of proteins with very little moisture. It would be difficult to eat once it is in this state.

Now one can understand why meat toughens when it is dunked into boiling water. The high temperature of the water causes the meat fibres to contract internally and squeeze out the natural juices in the meat.

How to cook meat

The simplest answer is to never allow meat to reach temperatures where the proteins shrink so much that they force out the juices and liquids in the meat. Paradoxically, this allows roasting in ovens where the temperature on the outside of the meat can easily exceed, say, 170°C.

This is because the important INTERNAL temperature of the meat is raised only slowly, seldom exceeding 62°C-75°C before the roasted meat is ready to eat. Hence, in my opinion, it is crucial to use a meat thermometer when grilling or roasting meat.

One reason is of course to ensure that meat is cooked to at least 62°C for 10 minutes to render it safe to eat (as this kills all bacteria). Another reason is to make sure the meat is not overcooked – for myself, most meat is ready to eat at between 62°C to 68°C, and only chicken is allowed to get to 75°C, mainly for the texture.

As Potée Auvergnate requires cooking meat in a liquid, roasting is not an option. And boiling for hours is not an option either so after some thought, I decided to use a pressure cooker. A pressure cooker is one of the best ways to keep forcing back liquid into meat fibres during cooking and denaturation. The tendency of meat fibres to shrink in heat is countered by the constant presence of high-pressure cooking liquid which helps to retain the original structure of the meat fibres. 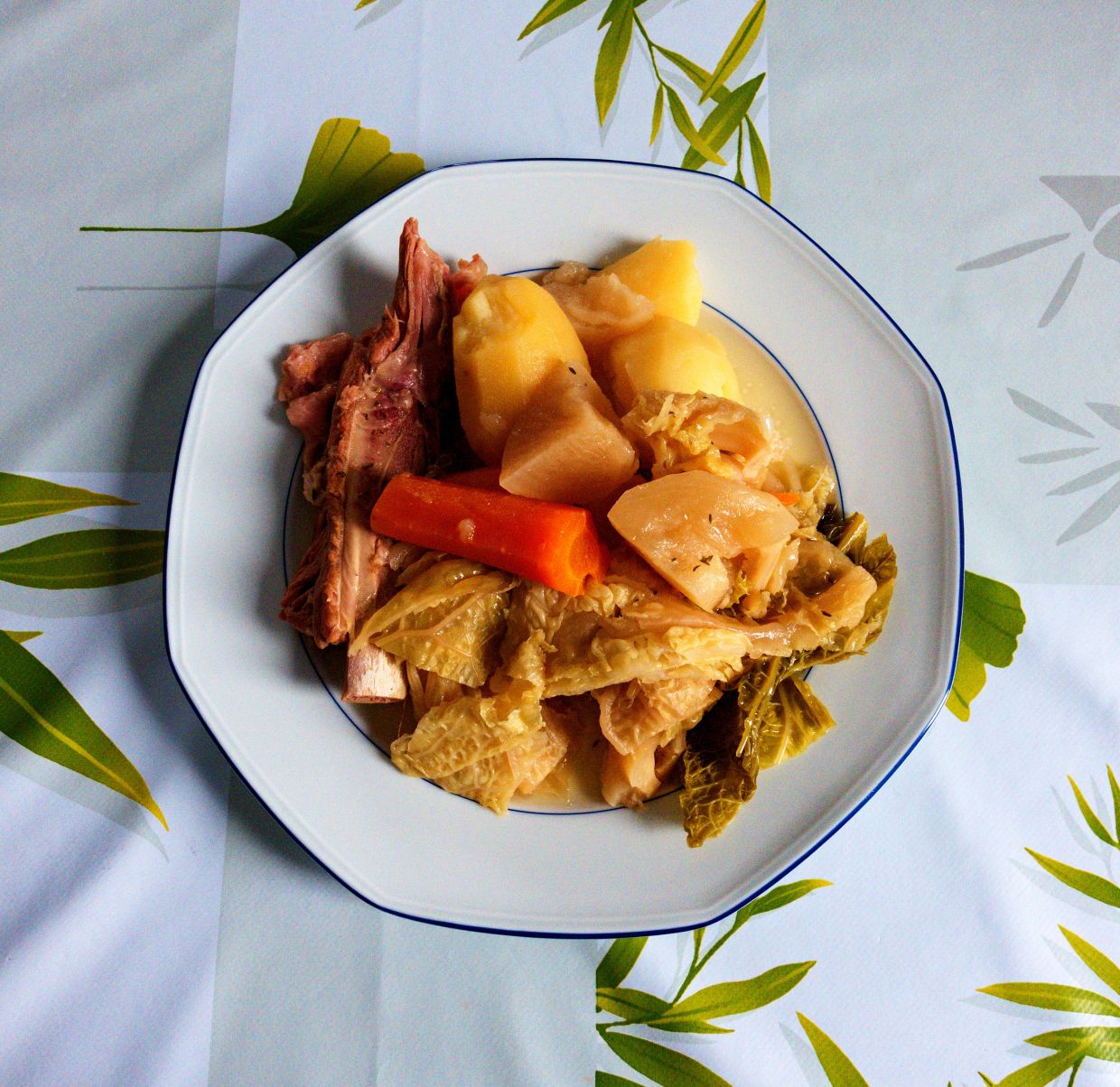 Potée Auvergnate normally takes over seven hours to cook, but the columnist made his in under an hour, with the help of a pressure cooker. — CHRIS CHAN

However, in the original recipe, the meat is cooked much longer than the vegetables, so the trick is therefore to cook the meat twice. The first time, the pork is cooked with herbs and seasoning for 15 minutes and left till the steam dissipated. The second time, the vegetables were added, and everything is cooked for another 18 minutes. The result was a Potée Auvergnate that fooled my neighbour into thinking it was cooked the original way, and the meat texture was perfect.

If one needs to cook in a hurry, a pressure cooker may be ideal, and it can save both time and money. They work by boiling water (seasoned with herbs as required) and retaining the pressured steam to cook the required food items.

The steam pressure is usually set to between 11.6 to 15 PSI (pounds per square inch) which means it is operating at around 1.8 to 2 bar (a bar is the atmospheric pressure at 15C at an altitude of 111 metres). This means that all kinds of food would be cooked around three times faster than using conventional methods – and in the case of meat, it also helps to render meat moist and tender.

How to cook really tough meat

Using a pressure cooker would probably be an idea now, and the trick is not to use too much liquid as the moisture loss in a pressure cooker is typically less than 5%, compared to 30% evaporation for conventional boiling.

Using less water means more flavour in the stock after cooking. One can improve the flavour by frying the meat first in the cooker with oil and some seasoning herbs before adding either stock or water. A pressure cooker is ideal for cooking tough cuts of meat. — NICKOLAS NIKOLIC/Unsplash

When cooking very tough meats, one can cook it first for, say, 25 minutes in a pressure cooker and then check. If the meat is still not tenderised, then add a bit more liquid (as required) and cook it again for another 25 minutes.

I was once given some old wild boar meat by a hunter and using this technique, it was possible to make a reasonably good curry with the meat after tenderising it first. But do not overdo the pressure cooking, otherwise the meat will become a completely tasteless mush.

Without a pressure cooker, another way to cook tough meat would be by braising it inside a thick pot with some stock or wine sauce. Dice the meat into chunks, coat lightly in seasoned flour, fry it in oil and herbs to brown it, then cover with stock or wine with some seasonings, and let the pot sit covered on the stove under low heat. Stir occasionally.

The secret of braising is to NEVER allow the temperature of the cooking liquid to rise above 85°C-90°C, and to keep it cooking for at least 6-8 hours. It is an aromatic way to cook meat if using a lot of herbs, and it can also warm the kitchen on cold days.

Curious Cook: The future is quite certain and it doesn't look good
Coffee's effects on blood pressure and blood sugar
Curious Cook: A perfect storm that threatens human existence is brewing
Save your child from a lifetime of craving sugar
Classes of glasses: The unique glasses used for cocktails and drinks
From Martinis to Spritzs, there is more to vermouth than you think
Curious Cook: Ice cream and metabolic syndrome
All eyes on nice ice: Using the right ice can make a difference to your drinks
Curious Cook: Foods best not eaten
Curious Cook: An imagined future of dining