The Food Compass system also includes phytochemicals (produced by plants), the first time these nutrients have been assessed for healthfulness. Red, blue and purple berries for instance have high amounts of phytochemicals called polyphenols. — VLADA KARPOVICH/Pexels

Like many people, I do not have too much time to ponder about food items when shopping at the supermarkets. Despite our best attempts, it is impossible to get everything from the farmers’ markets and we often must rely on modern packaged foods in the larger shops. For me, that means reading the tiny print at the back of such packaging to check on the levels of sugars, preservatives, colourings, other ingredients, etc.

It is always interesting to know what goes into modern foods and understand the reasons why such compounds are used (both synthetic and natural). If one has any curiosity about modern foods, then please read an earlier 6-part series on How to count on food – Part 1.

In France and some other parts of the EU, a food quality grading system called Nutri-Score was introduced a few years ago. Nutri-Score was designed to simplify the grading of food items in terms of nutritional values.

I cannot say I always agree with the gradings as the focus appears to be on fibre, protein, fat ratios and sugar content (rather than additives content), but it is nevertheless not a bad start. At least, it helps me eliminate most foods marked with D or higher, unless it is during a festive season, where nutritional values tend to be ignored along with alcohol consumption rules.

At the end of the day, classification systems like the EU’s Nutri-Score, the United Nations’ NOVA, the UK’s Nutrition label and Australia’s Health Star systems have limitations, as one would expect from any generic system. And therefore, it was very interesting to read recently about an American-developed Food Compass system which claims to “assess the healthfulness of foods”. 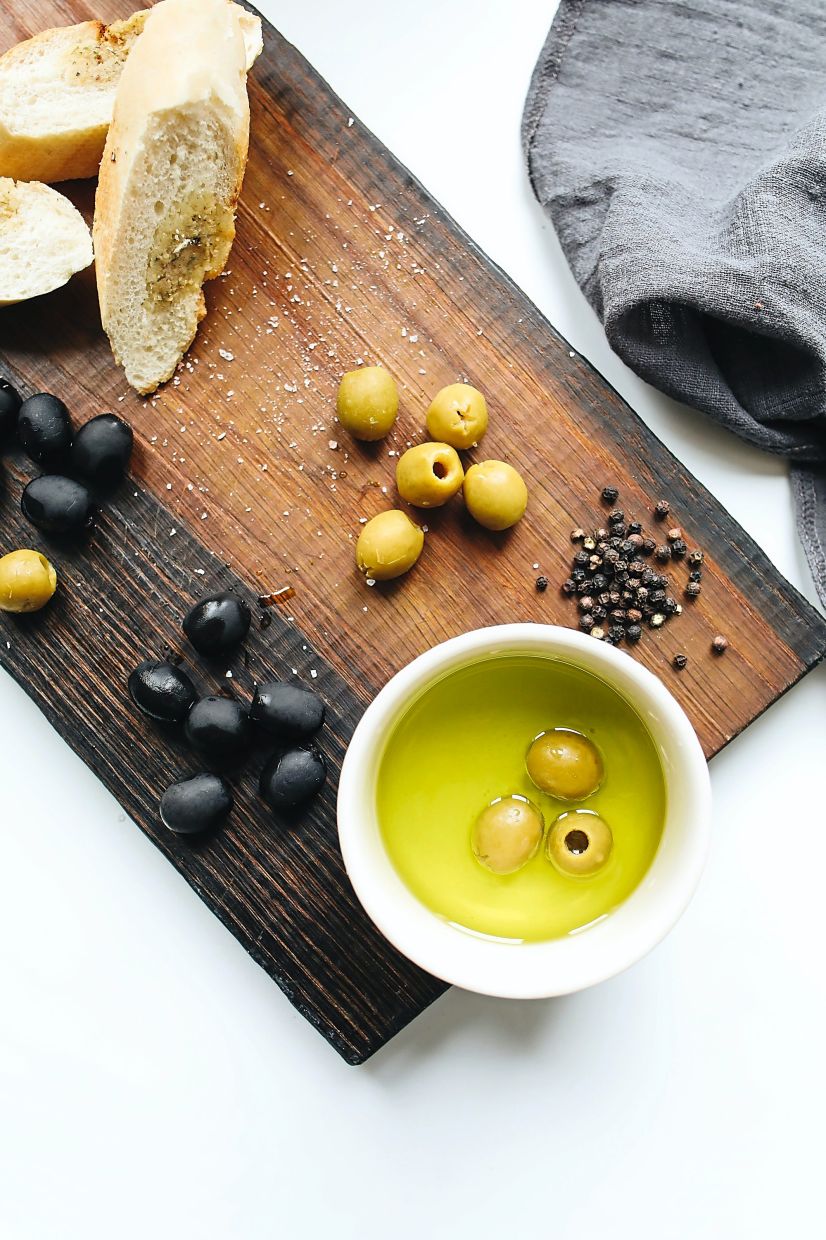 The Nutri-Score system has been controversial in Europe, because some foods like olive oil, received lower grades (a C for olive oil). — POLINA TANKILEVITCH/Pexels

The inclusion of phytochemicals was pleasantly surprising as this marks the first time this group of nutrients have been assessed publicly for “healthfulness”. And incorporating additives is also a step in the right direction.

What the Food Compass admits inadvertently is also interesting. Basically, it is suggesting that most of the other food nutrition classification systems are flawed and probably devised to be nothing much more than marketing gimmicks for food producers.

Having personally seen Nutri-Score in operation over the last two to three years, there is at least likely an element of truth here as the criteria for applying the top grades are not necessarily genuinely “healthy” as such.

However, the Food Compass itself suffers from some flaws. One limitation of the Food Compass is that it incorporates over 8,000 food items included in the American NHANES/FNDDS 2016-16 database (which therefore contains many brands and products unique to the USA). Nevertheless, that is a wide enough range of foods to be useful, even though it excludes many non-USA ingredients, products, and brands.

The Food Compass analysis is presented as a Kiviat diagram, also more popularly known as a spider chart or a radar chart, where multiple axes are spawned from the centre of the diagram. In my opinion, this is probably the best way to map the nutritional content of a food item as it can be easily visualised. The axes also have both negative and positive values to allow for food items which are nutritional deficient in some areas.

The simplest way to identify nutritious food items is therefore to pick foods with the widest area within the spider chart.

Whether such concepts would be adopted by food manufacturers remains to be seen, but the spider chart methodology can also be used by everyone who cares about the nutritional quality of food. All one has to do is adapt the axes to suit one’s particular preferences regarding dietary requirements. The Food Compass analysis is presented using a spider chart, which the columnist feels is the best way to map the nutritional content of different foods. — CHRIS CHAN

The bounded area for steamed fish is much larger than for fried chicken, indicating that the fish is the better option for dinner. 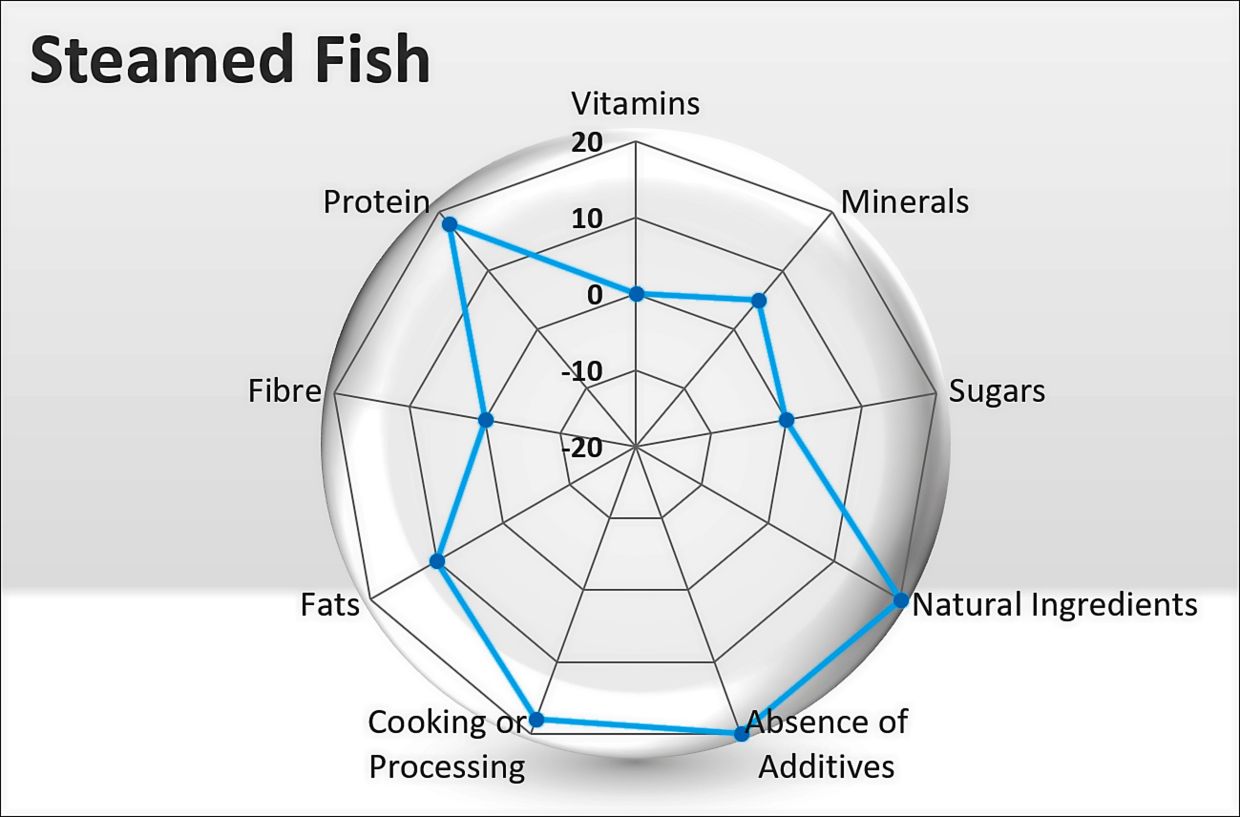 The columnist’s spider chart for steamed fish shows that it is a good meal option. — CHRIS CHAN

This is not to say that one needs to always choose the most nutritious options for a meal (as that would probably become a little boring quite quickly). However, with some easy mental graphics, it is now easier to be aware when eating bad options (and perhaps help to limit over-consuming such foods), and to make better choices when required.

The rest of this column today is about rats and mice, or more specifically, about some recent research on rodents which potentially also have some bearing on humans.

A paper published by Ohio State University in October 2021 studied the impact of a diet of highly processed foods versus normal foods in both young and aged rats. The experiment was simple: randomly assign three-month and 24-month-old male rats to “normal” rat food (32% calories from protein, 54% from wheat-based complex carbs and 14% from fat) or highly processed foods (mimicking human fast foods delivering 19.6% of calories from protein, 63.3% from refined carbohydrates such as corn starch, maltodextrin, and sucrose, and 17.1% from fat). In addition, some of the rats on the highly processed food diets were also offered DHA (docosahexaenoic acid), an Omega-3 fatty acid found in fish oils. 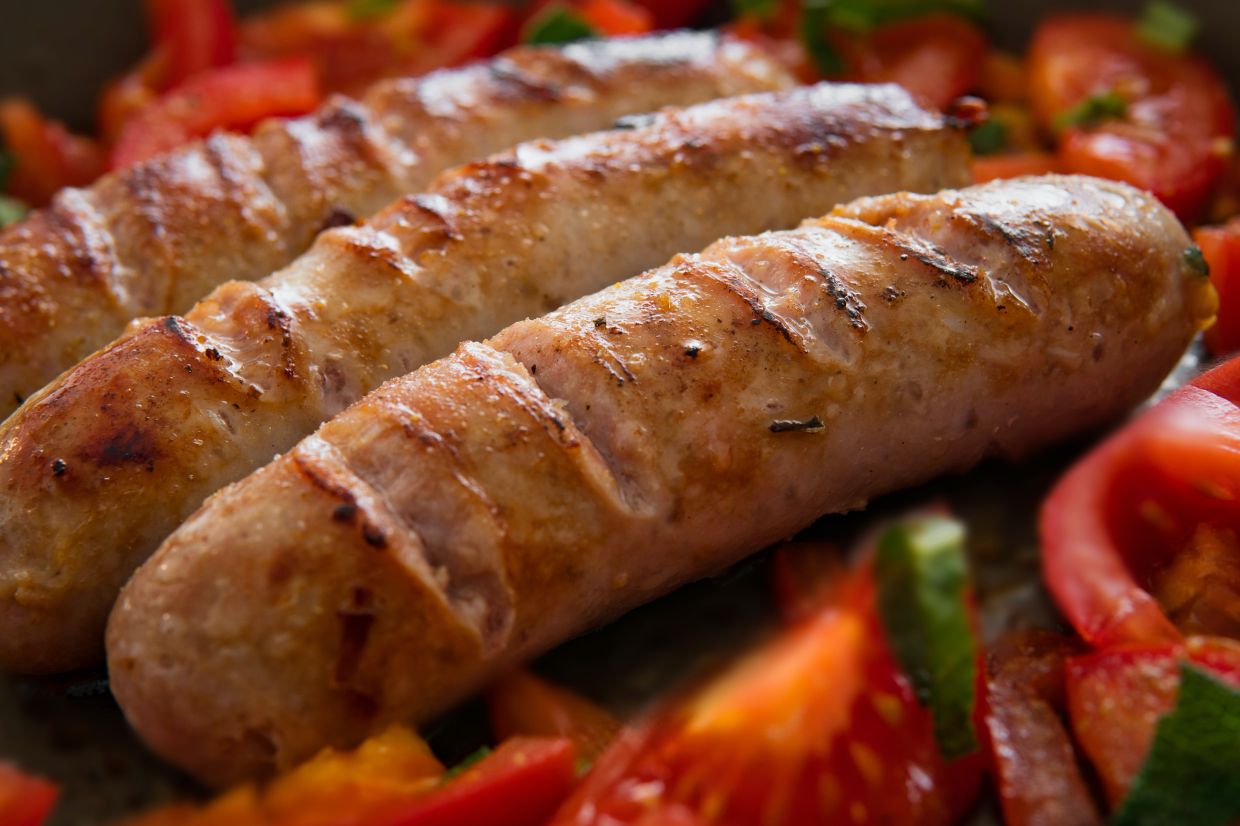 The outcomes after only 28 days were a little startling as it seemed that there were significant differences between the older rats who were only on the highly processed food diets compared to the young rats and the other older rats which were fed normal food. Old rats fed only on highly processed foods developed signs of memory loss, problems with contextual memory and impaired responses to cues of danger.

On the positive side, older rats on the highly processed food diets but supplemented with DHA did not develop the brain issues of the other older rats fed only processed foods. This has two interesting implications: (1) the poor quality of carbohydrates ingested made a pronounced negative difference to older rats, and (2) DHA appeared to mitigate most of the negative effects of processed foods for older rats.

At this point, one should always remember that rats are not the same as humans in terms of metabolism, so the impact of DHA on older rats do not necessarily mean humans would derive the same DHA benefit to mitigate against a diet of processed foods.

Nevertheless, the paper is a confirmation that fast foods are also bad for rats, not just humans.

There are always people dieting to lose weight or improve their health. This has led to some recent trends such as intermittent fasting where food is only allowed within a short time window, or where food is avoided entirely for a day or two every week (in extreme cases). The biological significance of such diets was investigated by the University of Wisconsin-Madison which published a paper in October 2021 about their experiments on mice.

The experiment was simple. The mice were divided into four groups. The first group ate whatever they wanted whenever they wanted. The second group ate a full amount of food but within a short space of time, thereby compelling them to have a long daily fast. The third group was given 30% less food but allowed to eat whenever they want. The fourth and final group was given 30% less food within a short space of time and forced to fast the rest of the day.

The results were curious and not quite as intuitive as one would expect. The main result is that fasting was the crucial factor in staying healthy, regardless of the amount of food eaten. The unexpected result was that mice in the third group (lower daily calories without fasting) were the least healthy and died about eight months earlier on average compared to the mice subjected to daily fasting routines.

So, for mice at least, a reduction of daily calorie consumption without any daily fasting period had quite significantly negative side effects. Again, I must stress this does not mean humans would respond in the same way as mice to these sorts of diets, but it is curious that a daily fasting routine had such notable benefits in mice.

The dangers of being too reliant on monoculture and genetically modified food
Curious Cook: The future is quite certain and it doesn't look good
Coffee's effects on blood pressure and blood sugar
Curious Cook: A perfect storm that threatens human existence is brewing
Save your child from a lifetime of craving sugar
Classes of glasses: The unique glasses used for cocktails and drinks
From Martinis to Spritzs, there is more to vermouth than you think
Curious Cook: Ice cream and metabolic syndrome
All eyes on nice ice: Using the right ice can make a difference to your drinks
Curious Cook: Foods best not eaten