CUISINE from the Mediterranean does not have to be specific to a certain ethnic culture. Rather, it is a culinary style of various people from the region.

Nizza gets its name from what Italians call the resort city of Nice, on the French Riviera.

Thus, the restaurant’s name hints at the innovative French-Italian cuisine that diners can expect to enjoy at Sofitel Kuala Lumpur in Damansara Heights.

As you enter the restaurant, the adjoining deck tempts you to savour wines and canapés by the poolside as you unwind, listening to contemporary lounge beats.

Inside, Nizza offers a relaxed atmosphere with its pastel-hued ceiling and muted beige décor. 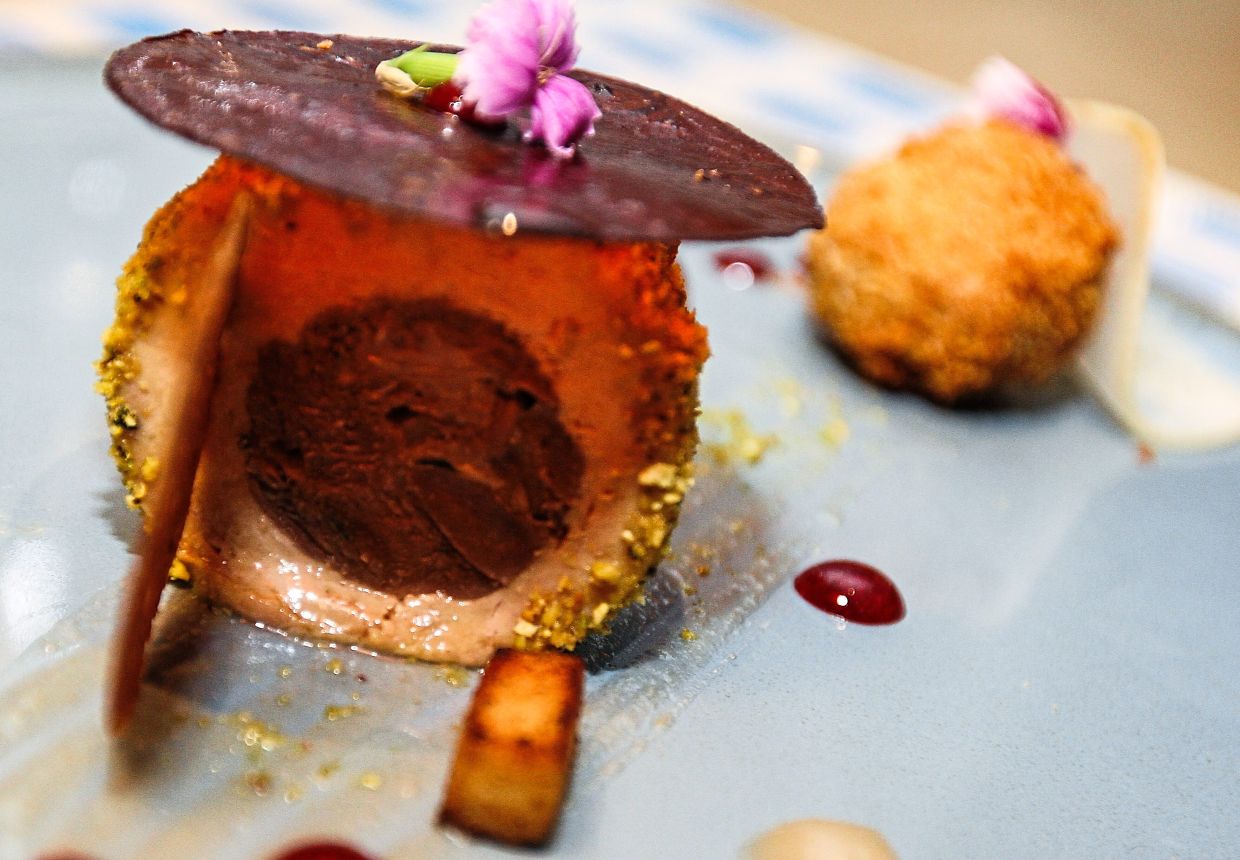 The Trilogy of Foie Gras with cherry gel is a whimsical incarnation of the French delicacy.

Our meal service began with a serving of a pretty tomato and thyme focaccia. The accompanying basil pesto was full of bold flavour and I dare say it is better than some I have tasted in Liguria, the Italian region that is the traditional home of basil pesto.

At Nizza, the new menu by director of culinary Roland Hamidouche features Mediterranean dishes and ingredients that may initially sound familiar but his presentation challenges one’s food memories.

Some may recall the Italian homestyle dish of Parmigiana di Melanzane as stodgy layers of fried eggplant interspersed with cheese and tomato sauce, that is similar to lasagna.

Nizza’s version, however, presents aubergine strips with a crispy breadcrumb crust. Flavours of the tomato sauce and parmesan cheese remain discernible without overwhelming the palate.

The Trilogy of Foie Gras (RM88) – a terrine wrapped around duck legs confit with balsamic vinegar – at Nizza has completely erased my expectations of how the French delicacy is served. The restaurant’s signature dish, Smoked Burrata Cheese (RM48), is served with great panache. As the glass dome is uncovered, smoke plumes swirl outwards, like clouds clearing to reveal a perfectly round moon

The soft burrata cheese orb in a tarragon consommé is then served, with its creamy texture contrasting against the sweet tang of heirloom tomatoes and tart raspberries.

Another attention grabber is the gargantuan tomahawk steak (RM398), which is sure to turn heads as it makes its entrance.

The 1.4kg Tomahawk of Australian Wagyu marinated with thyme, rosemary and garlic is cooked sous vide-style about 12 hours before it is grilled over a wood fire.

The massive cut is accompanied by a medallion of compound butter, delicately flavoured with herbs, which can be melted over the meat for additional richness. 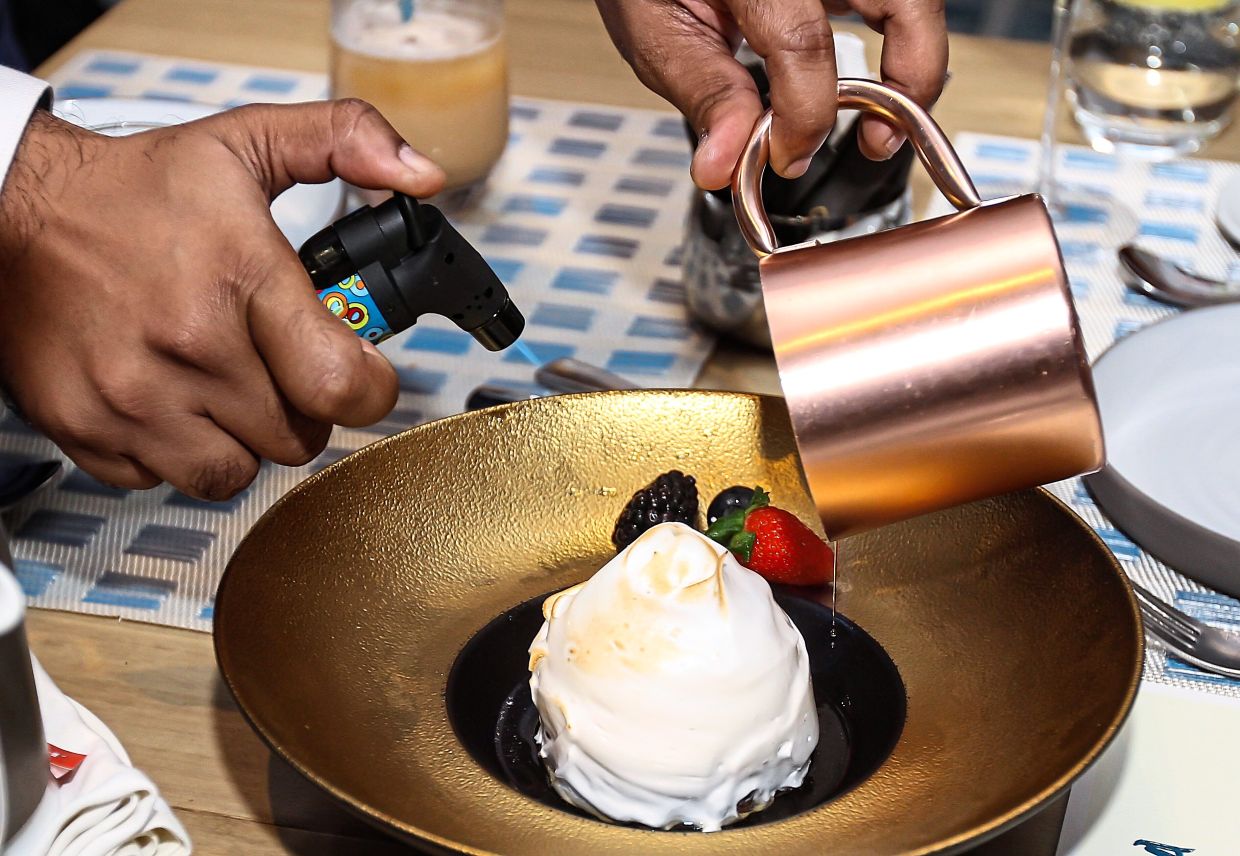 The Fire Bomb Alaska Flambé fuelled by Cointreau, dazzles with its flames and a toasty caramel scent.

Among its four side dishes was a smoked potato-celeriac mash that was addictive.

The ceviche of Hokkaido scallops (RM66) has a confetti of finely chopped dill and is served with tart green apple matchsticks to accentuate the seafood’s fresh flavour. Squid ink crackers add an unexpected crunch.

It should be mentioned that Hamidouche’s light touch with seasonings allowed the natural flavours of the meat and seafood to stand out.

Visually, we enjoyed the artistic arrangement of the mixed seafood grill (RM188) as it enticed us to savour each morsel of the Boston lobster, scallop, prawns and seabass. These paired exceptionally well with the dry yet fruity Mommessin Sauvignon Cuvée Saint Pierre.

Nizza’s desserts are the way to end your meal on a dramatic note. 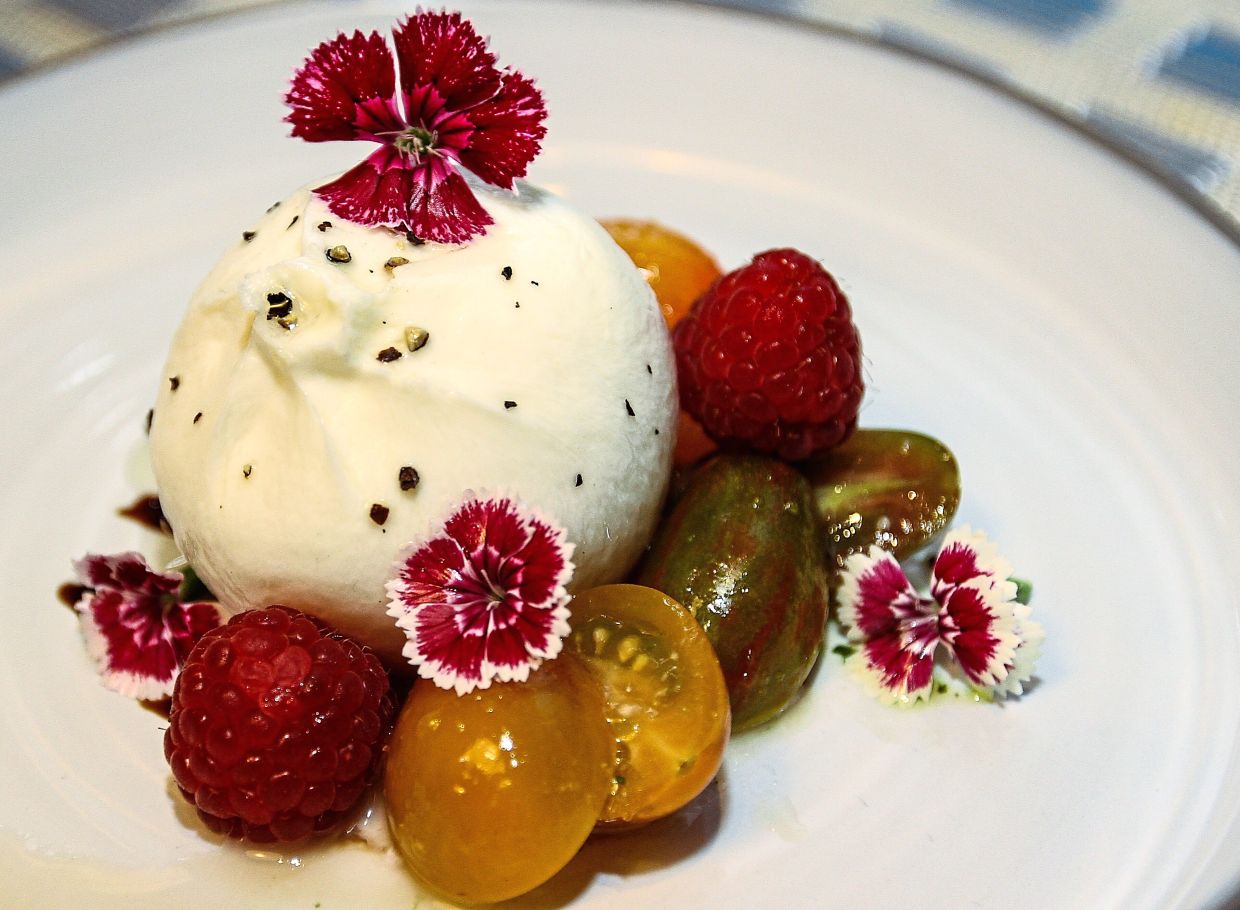 Set aflame at the table, the Baba au Rhum (RM38) remains pleasantly moist with the bold flavour of the rum tempered with vanilla gelato. It’s a marriage of the best of Italian and French desserts.

For another round of pyrotechnics, you can order the Fire Bombe Alaska Flambé (RM33) that’s fuelled by the citrusy liqueur, Cointreau.

The meringue-crusted bomb, upon being cracked open, reveals halves of pistachio and raspberry gelato encased in a brownie biscuit.

At the end of the meal, a delightfully aromatic limoncello from Sardinia as a digestif did the trick. Champagne and an assortment of wines from major wine regions are available. Diners can refer to the restaurant’s extensive wine list.