Local folklore on a plate

Upon ‘smashing’ the dessert rock open, diners will be treated to Kelantanese dessert kuih puteri mandi.

Ever wondered what culinary creations would be produced if the seven demands posed by Puteri Gunung Ledang or Si Tanggang — the ungrateful son who turned into stone — served as inspiration?

The menu, introduced in conjunction with National Day, also takes diners on a culinary journey through Malaysia to explore the nation’s flavours and legacy.

“It took our team about eight months to research local folklore and conceptualise a menu based on these stories, ” said Norazizi.

“At the same time, we made an effort to highlight some of the specialities and ingredients from each of the 14 states in Malaysia.”

Norazizi tapped into his Western culinary training to create a menu that celebrates Malay cuisine in fine dining style.

The creations include generous use of local herbs and spices such as lemongrass, chillies, galangal, garlic and ginger.

Besides the kitchen team that includes banquet chef de cuisine Mohd Ridzwan Mohamed Rasit and pastry sous chef Azizul Bistaman, Norazizi credits the hotel’s in-house carpenter and graphic designer for their roles in crafting the props and illustrating the menu to elevate the dining experience.

The princess’ seven demands are symbolised by seven ingredients in seven bite-sized items.

For example, the cup of sultan’s blood is represented by red otak-otak in the Malaysiaku Signature Otak-Otak, a dish from Johor.

The vat of virgin maiden’s tears is represented by young mango featured in the Smoked Duck Rolls with rose apple relish, and highlights duck from Sarawak.

As a native of Selangor, Norazizi ensured that his home state was included in the form of Lobster “Gula Merah” Curry with pineapple chutney and crushed areca nuts.

“I grew up eating gula merah, which resembles brown sugar, as a child. I would eat it with bread or roti canai, ” he said of the ingredient that is common in Malay households.

The next dishes served were the Cured and Pickled Chilean Seabass as appetiser, followed by Clear Flower Crab Soup.

The appetiser dish was inspired by “Bawang Putih, Bawang Merah” — a tale of two sisters. The Chilean seabass represents the magical talking fish, while the two accompanying dumplings symbolise the two sisters from the story.

“The fish is marinated with pickled kedondong. The dressing contains torch ginger, chilli oil, tomato jam and avocado cream. So you can taste a little bit of sweet, sour and salty in one bite, ” said Azizi.

The dumplings are packed with the herbal goodness of lemongrass, galangal, onion and garlic.

The soup, showcasing the tale of “Ketam Sumpahan”, is a treat for the eyes and palate.

It is accompanied with Oscietra caviar and crab, served in a sunflower. Norazizi recommends that each spoonful of soup be enjoyed with a scoop of caviar and crab meat.

The roasted beef tenderloin was paired with a spicy coconut gravy, which had a spicy aftertaste but was addictive to the last drop.

“The chicken briyani wrapped in puff pastry is my personal favourite. The idea came about from a previous food tasting event, where a client requested for a different way to present briyani, ” shared Norazizi.

Dessert, presented in the form of a chocolate rock, was inspired by the tale of “Si Tanggang”, the ungrateful son.

The dinner ends with a platter of petit fours showcasing the two fruits from Malaysian folk song Rasa Sayang — jackfruit and banana.As the bite-sized treats are served on a phonograph (made of edible chocolate), feel free to hum or sing the popular song as you savour the petit fours.

The “Malaysiaku: A Reimagined Malay Heritage Menu” is available for dine-in on Aug 20, Aug 31 and Sept 16. Dinner is served from 6.30pm onwards.

It is also available via takeaway until Sept 15 (except on dine-in dates). 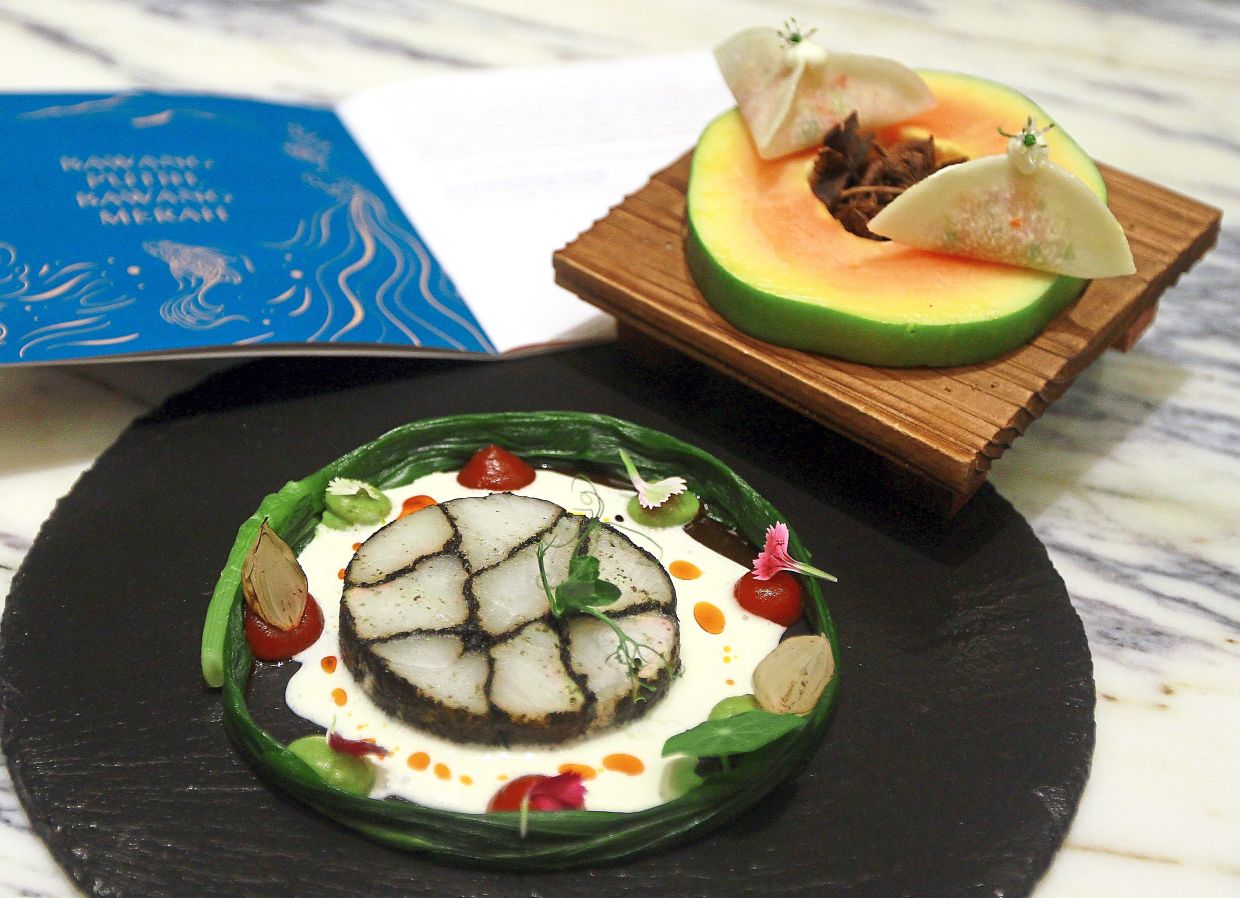 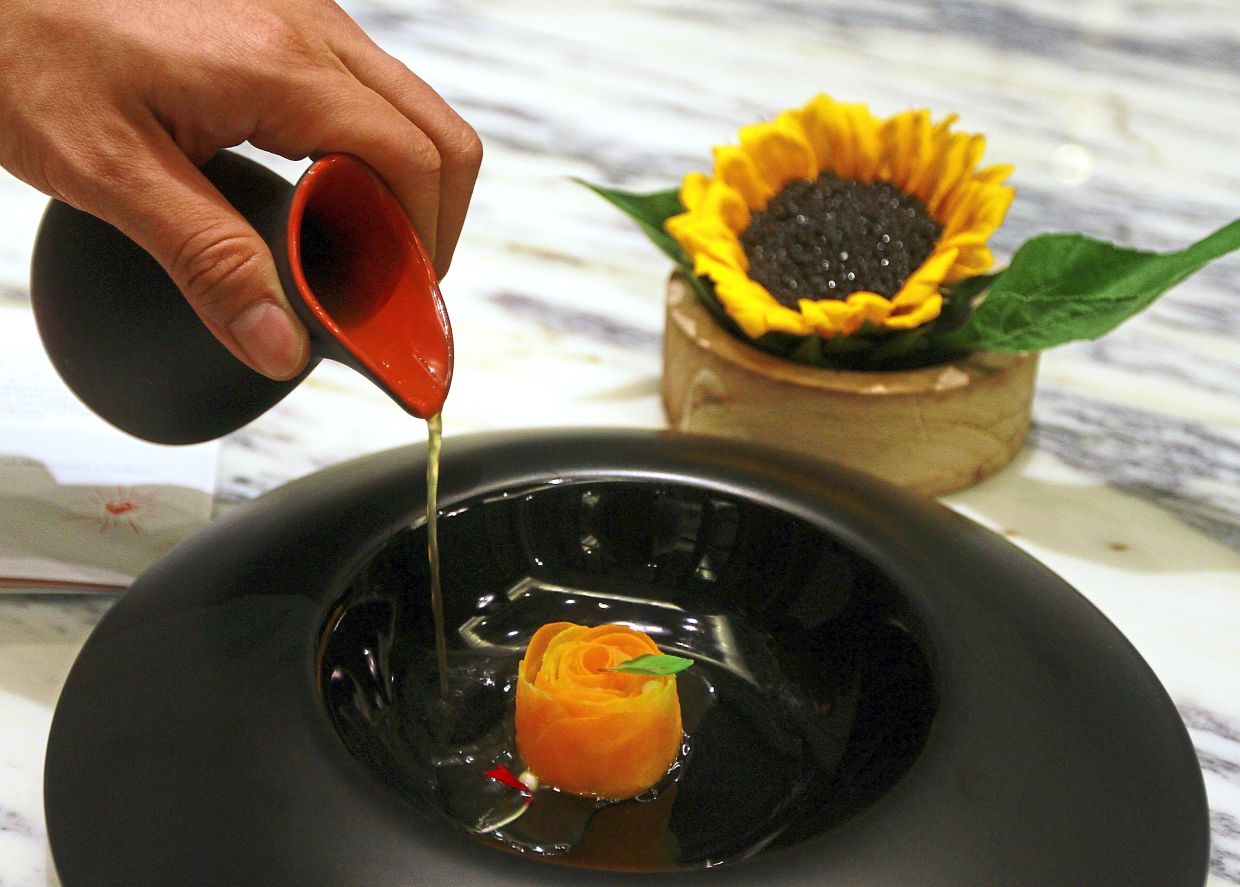 The Clear Flower Crab Soup is to be enjoyed with Oscietra caviar and crab meat.