A dose of good medicine

Enterprising: Loh wants to encourage pharmacists to be more entrepreneurial.

FROM a childhood spent in a small village in Pontian, Johor to eventually starting his own business, Steve Loh Leong Huat remembers vividly the days when everything seemed to work against him.

“Growing up in a house without running water or regular electricity supply, most of my spare time during those days were spent helping out at my parents’ fruit stall. We work basically every day, even during Chinese New Year. When other kids were busy celebrating, I would follow my father into the jungle to collect durian to sell,” says Loh.

But instead of whining about his circumstances, Loh took his tough beginning in strides, excelling in studies and eventually graduated to become a pharmacist.

Loh’s journey towards becoming a business owner began when he was posted for his housemanship in government hospitals. After serving four and a half years with the government, he worked as a pharmacist with one of the local pharmacy chains for about two and half years before deciding to step out on his own.

Things certainly did not get easier once he got married and started his first outlet under the OK Pharmacy brand with his wife in 2011. His former employer-turned-competitor deliberately bought over the premises he was renting and ordered him to move out within 24 hours just as the lease was about to expire.

“It was tough, we invested everything we had into the outlet to begin the first operation. We didn’t even have a proper set-up. A table under the staircase at the shop served as our makeshift office.

“We moved out in desperation when I was served a legal notice to vacate within 24 hours, we managed to get another shop as a last minute replacement. It was less strategic in terms of location but allowed us to at least stay put and continue serving the area,” Loh recalls. Today, through hard work and with the right team and sheer determination, Loh is leading the

business as the chief executive officer of OK Pharmacy, one of the fastest growing privately held pharmacy chains within the Klang Valley.

The company is now well placed for steady growth, says Loh, but only if it continues to sharpen its strategies, invest in its people and put in place a plan for succession. This is crucial in order to stay the course in delivering competitive products and improve customer satisfaction.

According to Loh, OK Pharmacy is looking at corporate exercises to catalyse its continuous growth, including acquiring other pharmacy chains to grow its market scale next year before opening up the company to strategic and private equity investors.

The pharmacy retailer is currently finalising talks to acquire a smaller peer which has around six to seven outlets to add to its current network of 15 stores. The company’s expansion has been self-funded so far, and further acquisitions will be funded through bank borrowings, he says.

Besides acquisitions, Loh says OK Pharmacy is also developing franchise opportunities for young pharmacists to be business owners and further accelerate its own growth.

Over the longer term, Loh intends to sell stakes in the company to PE or strategic buyers once it reaches its goal of having more than 50 outlets. He hopes to achieve this within the next two to three years.

Loh and his wife and co-founder Carol Liew, who is also the company’s chief operating officer, currently own the majority of the shares in the company, at more than 70%. Some other senior key management team members hold the remaining shares.

OK Pharmacy currently operates throughout the Klang Valley with a staff strength of more than 80 people, including more than 20 pharmacists.

Its turnover breached the RM25mil this year and Loh expects sales to hit more than RM30mil by end-2020.

“There is still room to grow in retail pharmacy. It is a viable business to go into but we need to build up and operate as a team,” says Loh.

His observation comes on the heels of a consolidation last year that involved four popular brands.

According to Loh, scale is getting increasingly important for pharmacy operators as the industry is experiencing a compression in margins for supplements as well as generic drugs. This is mainly due to the fact that price competition is getting stiff as the number of pharmacies has increased substantially over the last decade, including those with financial backing from PE funds and multinational chains.

Nevertheless, by focusing on products and service quality, the group believes it will continue to expand and be profitable, says Loh. He adds that the group will continue to adopt a “modest yet pragmatic” plan to open 10 to 12 new outlets a year with a renewed focus on peripheral towns outside the Klang Valley and in other major cities in the country.

One of the main challenges in expanding its store count is getting the right partner to help manage the outlets, notes Loh, as many pharmacists are still unwilling to take the plunge into business by taking up ownership or equity share in the store.

into business owners. This plan will also help to elevate the financial standing of the pharmacists, he says.

Loh ensures that enough attention is given to grooming his team so that they are able to give the best service possible to their customers.

One of OK Pharmacy’s edge in the market, he says, is its personalised service at the counter.

“As a pharmacist, we meet people’s needs by seeing them face-to-face daily. This is reflected in

us making sure that our customers get to speak to our pharmacists and we will take the time to make sure you understand your medicines and supplements. A lot of our customers have shown their appreciation in this regard,” says Loh. Still viable: Loh says there is still room to grow in the retail pharmacy business despite low margins. — AFP

Going forward, Loh says the team that he has put together in OK group will continue its quest towards expansion. This includes building up an online presence. Plans are also in place to eventually set up or acquire a manufacturing facility to move upstream and start a generic drug and food supplement manufacturing division.

While the overall consumer retail spending in Malaysia has been sluggish in the past three years, Loh is confident that the healthcare industry, including the pharmaceutical segment, will continue to grow.

But Loh also has other plans that he intends to build upon. His entrepreneurial zeal pushed him to further diversify into the food business with a newly set up F&B unit, Goldiven, to manufacture popcorn for exports. The company is also finalising terms with a Taiwan-based dessert company for other products.

“Given my family’s background, it is obvious that to achieve success in life is never going to be easy. But I hold on to this belief that if we are willing to accept the fact that this world is unfair, then we will find the determination to work towards achieving our goals no matter the challenges that come our way,” he says.

Similarly, OK Pharmacy’s journey from a struggling single outlet to a fast growing chain of

stores while maintaining its independence in the face of an industry consolidation has been filled with challenges.

But Loh and his wife show that the willingness to swallow the bitter pill is the best medicine to overcome your ruthless business rivalries and naysayers. 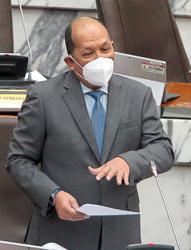 Raising MSMEs’ contribution to GDP by 1% to 1.5% each year
Small businesses play a big role in transition to net zero
Good turn of events
Grocery platform raises RM6.18mil from ECF
Enabling digitalisation
Getting SMEs on the digital bandwagon
PM: Grant for SMEs to be given out from next week
Higher costs weigh on recovery
Call to reduce burden of SMEs
TAR UC alumni starts national initiative to help with economic uncertainties