Fuelling up a business

Logistical needs: The company has a fleet of 96 trucks to carry out collection works.

LONG before FatHopes Energy Sdn Bhd was minting money by converting waste oil into biodiesel, Vinesh Sinha was mixing his own concoction of biodiesel in his kitchen: used cooking oil strained through old t-shirts and blended with diesel.

The concoction worked well enough to power his car and reduce his fuel bill.

But most people thought Vinesh was mad.

When he went to the UK for his tertiary education, he saw that they had petrol pumps for biodiesel.

What got him even more excited was when he found out that there was a tax on homebrew biodiesel. Bring it on: A worker unloading waste oil at the facility collected from the many eateries around the country.

“That means there are a lot of people in the UK who are actually producing their own waste-oil biodiesel at home!” adds the 30-year-old Penangite.

So instead of spending his days in classes, Vinesh started volunteering with companies that were involved with waste-oil biodiesel production to learn more about their processes and operations.

After about nine months, his parents were informed of his truancy and he decided not to continue with his studies anymore.

At about the same time, in 2009, he was given an opportunity to produce waste-oil biodiesel for a UK-based logistics provider that was looking for a local supplier. So Vinesh returned to Malaysia and used the RM80,000 refunded to him by his university to buy equipment to set up his little operation here. For a year, he went about collecting used cooking oil from eateries and shops and converted it to biodiesel for the UK company. 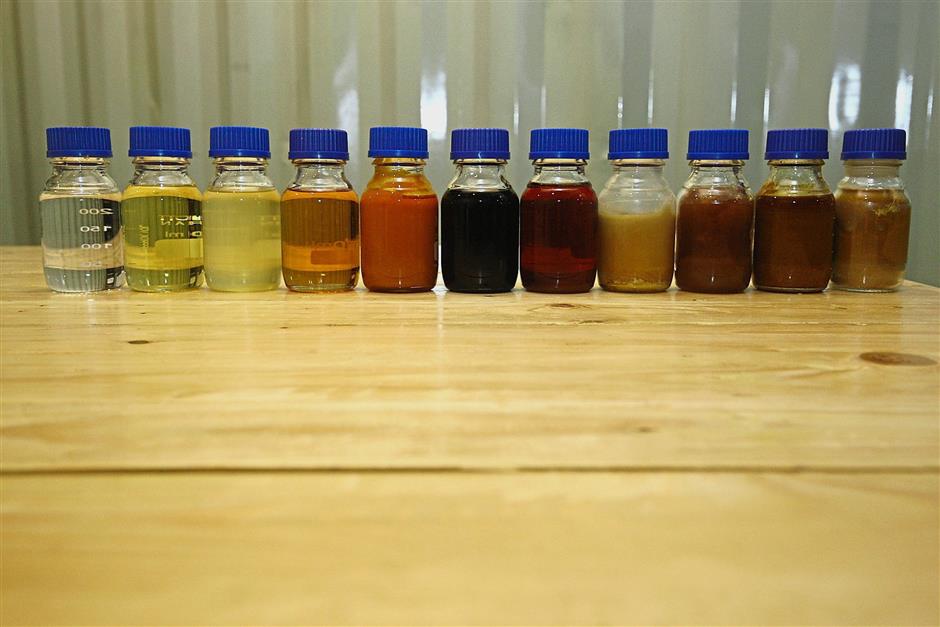 Recycled: A variety of waste oils can be converted and refined into different grades of biodiesel (first four bottles on the left).

It wasn’t easy operating a business with little to no running capital, says Vinesh. What helped was that he was able to obtain his oil feedstock on credit.

Vinesh set up FatHopes Energy in 2010 to scale up the business on his own and continued supplying his biodiesel to various companies as well as to his feedstock suppliers. Proprietary technology: The smart tank allows FatHopes Energy to increase its supply of used cooking oil and scale up its business.

One of the challenges in the industry, he says, is the difficulty in obtaining feedstock for biodiesel as well as in maintaining the consistency of waste oil collection. He notes that a lot of used cooking oil from eateries are sold off on the side to refineries that will convert it back to new cooking oil.

“Used cooking oil is usually stored in barrels and you get quite a bit of stolen barrels every now and then. That is lost revenue to the store owner because the income from those stolen barrels goes to individuals. There is no way to be sure about how much oil a store can collect,” he says.

Consequently, FatHopes Energy built its own proprietary smart tank technology which would enable eateries to dispose off used cooking oil directly into the tank, which are then collected once full. This prevents theft of the used cooking oil.

Additionally, the tanks are also able to transmit data back to FatHopes Energy so that they would know when a tank is filled and ready for collection.

The company currently has an in-house fleet of 96 trucks to collect the oil but Vinesh notes that the data from the smart tanks will enable them to plan their logistics better.

“The smart tanks allow us to scale our operations because we can reduce our cost of owning the logistics. We can now outsource the collection because we know when the tanks are full instead of us just driving to the stores uninformed every other day to collect the oil.

“We also have better traceability of the oil because we know how much oil exactly we are collecting from these outlets. So what we are really doing is innovating the supply chain of waste oil collection,” says Vinesh. 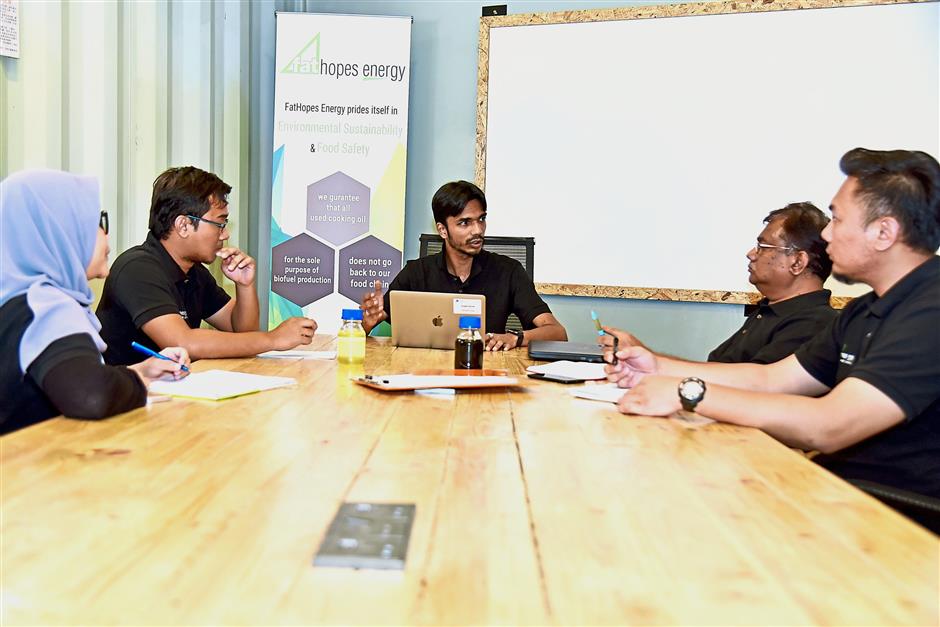 Grooming talent: Vinesh (centre) believes in creating opportunities for his team to grow.

Following the rollout of its smart tanks, Vinesh says eateries and restaurant chain owners were seeing increased revenue from the sale of their used cooking oil through proper channels.

Today, FatHopes Energy dominates the used cooking oil collection market, securing about 35,000 points of origin in Malaysia. That makes up about 70% of the available points in the local market and provides the company with some 18,000-19,000 tonnes of waste oil a month.

“By converting used cooking oil to biodiesel, we are also helping consumers by diverting waste oil away from the food chain, by preventing it to be converted and repackaged as new oil,” he adds.

The company has also diversified its waste oil feedstock to increase its supply and currently collects over 30 different types of used oil for processing, including palm-based waste oil and grease.

Although business grew well in the local market, local demand for FatHopes Energy’s produce started shrinking after oil prices plummet post-2013. Biodiesel did not seem as attractive a value proposition compared to regular fuel and the company had to explore the export market.

But this turned out to be a good thing as Europe started looking at capping the use of food-based biofuels and boosting the market for non-food based biofuels.

This was certainly opportunity for FatHopes Energy to grow its market. Lab works: The company is always looking at other waste materials that it can up-cycle for power generation.

At the moment, operations at its 2.6-acre site near Sungai Buloh yield about 17,000 tonnes of biodiesel a month, all of which are exported to Europe.

Demand has been growing steadily over the years, but Vinesh admits that its facility is already running over its capacity and the company would need to look at other sources to boost capacity.

He is also looking at expanding its reach into other countries to tap into the huge availability of waste oil supply in the region.

FatHopes Energy is looking at growing into the Indonesian market in the third quarter of this year and to cover the Asean region by 2020. Vinesh says it will do this through strategic alliances with its current suppliers.

“We are already servicing almost all the major fast-food chains in Malaysia and we will partner with them to service their operations in other countries. But we hope to enable the locals in these countries to run the collection business. This also helps build entrepreneurship among the locals,” he says. 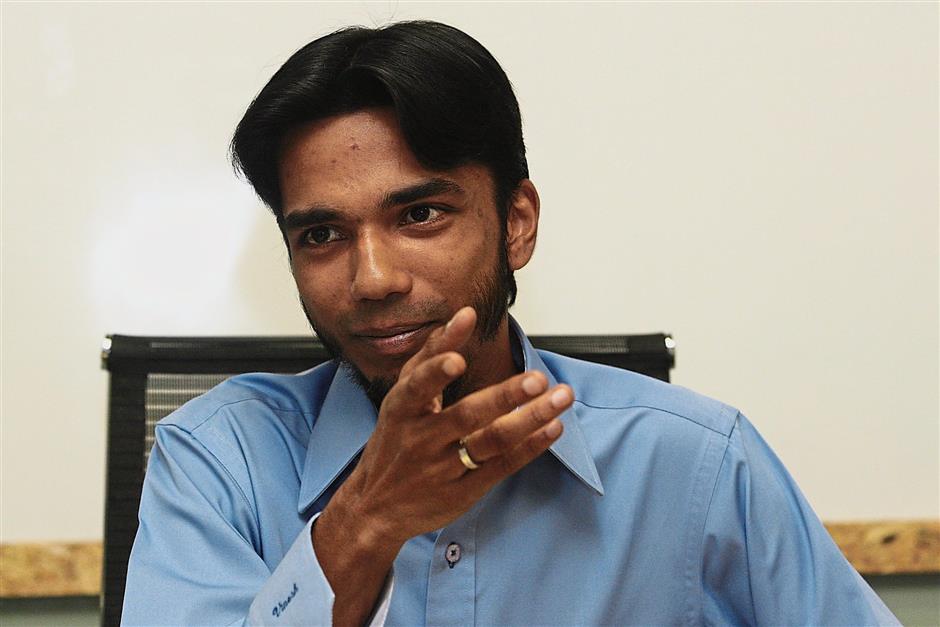 Other plans: Vinesh is looking at investments in driverless vehicles and Internetbased technology.

With the vast potential in the region, Vinesh says FatHopes Energy is currently being courted by potential investors interested to take up major stakes in the company. And from the looks of it, valuations for the company have been rather generous.

Last year, the company turned in sales of RM575mil.

“Moving forward, we are also taking a vested interest in driverless vehicles because of the intensity of our logistics and Internet-based technology to improve our services,” he says.

The end goal, he says, is to develop a sustainable self-propagating business model that takes into consideration economic and environmental sustainability as well as social responsibility.

Looking back, Vinesh has no regrets dropping out of school to entertain a hobby. The returns have been nothing short of expectations.

Although he laments not having a mentor to guide him through the early days of running his business, he acknowledges that not knowing the details did indeed bring him far.

“If I was not as naive as I was, I probably would not have started. There was just too much capital involved,” he says.

His advice for other budding entrepreneurs? Don’t be fearful of trial and errors.

“And be brave. Have faith in yourself,” he says.