Developer’s experience as architect pays off

RK Group's Managing Director Dato Roslan Khalid with one of the scale model of his property projects.

As a young architect, Datuk Roslan Khalid learned about the aspects of designing, managing and building residential projects. This experience was what drove him to be a successful developer.

Today, he is the head of developer at RK Group (Malaysia) Sdn Bhd, which was set up in 2000.

Roslan, the managing director of RK Group, said he made the transition from an architect to a developer gradually.

“It’s rewarding to be a developer. You feel empowered and motivated because of the financial incentive. But it’s not so much about the cashflow. It’s the sense of accomplishment and satisfaction that gives me the drive. My motto has always been, “Built distinctively with passion”. I don’t count the number of projects I do, but the sense of satisfaction I get,” said Roslan, who played a major role in the planning of Karambunai Resort in Sabah.

For Roslan, it’s all about passion, picking different projects and giving the clients what they deserve.

“Most contractors will tell you that architects don’t know much about construction. It’s good to have some practical experience so that you can talk the talk and walk the talk,” said Roslan, who thinks more architects should take the same career path.

He set up architectural consultancy AK2 Runding Sendirian with two other architects in 1987 and was appointed to design about 1,000 units of houses in Sime UEP’s Subang Jaya.

This was followed by work on the Mutiara Oriental, Puteri Villa, Putera Villa, Wickham Manor and the Kuala Lumpur Golf and Country Club projects in the Klang Valley.

Roslan first learnt to design high-rise buildings during this period.

In 1993, he followed his gut instinct and joined two brothers to set up boutique property developer Amona Consolidated Holdings. Their first project was 910 units of apartments in Tampoi, Johor Baru, that were part of a RM200mil mixed development project comprising 24 units of three-storey shop office units, 360 units of luxury condominiums, 510 units of medium-cost high-rise apartments and a clubhouse.

After completing his MBA in 2000, Roslan decided to go his own way because he wanted to do more than just design houses. So, he took on the development of Axis Residences in Ampang, Selangor.

“The residents needed a neighbourhood retail centre so I positioned the development to hit that target market. The launch was a hit and the sales gallery was open till midnight,” he said.

Roslan said the most memorable work he has done was redeveloping the abandoned Desa Aman Satu and Desa Aman Dua projects in Pantai Dalam in 1997. The work involved building 360 units of medium-cost apartments in the first phase. Desa Aman Dua, 452 apartments in two 30-storey blocks of 30 Storey Apartments, was completed in 2001 at a cost of RM98mil.

Roslan was determined to give the abandoned project his best effort. The project’s success spurred him to undertake larger developments.

By now he already had a vision of what buyers wanted and needed and this gave direction to RK Group, was gaining a reputation in the property development industry.

“I’ve always been inspired by passion to strive for excellence and innovation. I’m also a risk taker, but I try to minimise the risk by starting small first,” said the Penang-born architect turned developer.

Roslan said RK Group’s success was because of the teamwork within the company and the support of his wife, Datin Zahida Abdul Karim, the executive director of RK Group.

“It was not an easy journey, but I never gave up. When you have a problem, keep looking for solutions and don’t let fear dominate. Prayers also help a lot,” said Roslan.

RK Group is currently investing in the northern region, especially in Sitiawan and Manjung in Perak because of the increasing value of residential, commercial and industrial properties in the two districts. Manjung is now touted as the economic hub of Perak and is the fastest growing district in Perak for the commercial sector.

The area is easily accessible thanks to roads, railways, cargo terminals, airports and ports, and has rich natural resources.

“The district has attracted a significant number of international investors. The major projects and presence of multinational companies over the next few years will further boost Manjung’s burgeoning economy.

An example is Brazilian multinational metals and mining corporation Vale SA’s state-of-the-art, iron ore trans-shipment facility that functions as a catalyst for the local economy in Manjung.

This benefits the Lumut-Seri Manjung-Sitiawan sub-conurbation via both direct effects from the job creation and economic activity and spin-off effects from downstream activities.

“Manjung is strategically located and is close to Boustead Shipyard, and the Malakoff power plant. It’s only a three-hour drive both from the Kuala Lumpur from the South or Penang from the North.

“With the completion of the West Coast Expressway, it is expected to catalyse a new growth spurt due to the growing confluence between the Klang Valley conurbation and the Lumut-Seri Manjung-Sitiawan sub-conurbation,” said Roslan.

The connectivity to Manjung is expected to improve with plans to link Taiping, Perak and Banting, Selangor to the West Coast Expressway. Next in the company’s pipeline is Sitiawan Sentral, the commercial heart of Sitiawan.

All units of the company’s development there have been sold. The 51 units of two- and three-storey shop houses, with a gross development value of RM28mil, were developed by RK Group’s subsidiary Kinta Berkat Sdn Bhd.

“At the launch, the two-storey units were priced competitively at RM380,000. Currently, prices for these units are fetching RM580,000 which is a 52% increase over two years,” said the Penang-born Roslan.

As a developer, he says he feels cities should do more to encourage good architecture along with development.

“The city planning departments and the Landmarks Preservation Commission make some attempts, but they’re not doing enough. They should encourage a more fully integrated approach to harness the growth of the property sector,” he said.

“We like to set new benchmarks and stay ahead of the market. We have developed a portfolio of outstanding developments that are unique, resulting in high returns on investments for investors,” he said.

The company has also set up a new subsidiary, which is expected to lead a foray into the hospitality industry.

“The country needs more developers who are professionals with the necessary technical knowledge. The property industry is maturing as more developers have architects and consultants behind them.

“This is where the consumers will benefit. We pay great attention to designing living spaces that provide tangible and intangible benefits to all stakeholders, especially residents and communities,” he said.

Roslan feels developers should treat buyers with respect and show them the kind of quality you put into your development.

“The greatest satisfaction is seeing clients telling me this is what they’ve been looking for. I’m not one who competes with others.

I like to ‘build and grow’. Development is more than just designs, it’s also the functionality, viability and capability to develop the project,” he said. 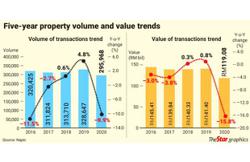