Rise of the robots

One of the MyBOT-X variants during a demonstration.

When American Airlines Flight 11 crashed into the North Tower of the World Trade Center in New York on Sept 11, 2001, the city’s fire department sprang into action.

Over the course of three hours, the department’s 121 engine companies, 62 ladder companies and 27 fire officers were deployed to the scene.

The collision of the plane carrying thousands of litres of jet fuel with the 400m-high building caused a fire said to burn as hot as 1,000°C. More than 300 firefighters perished when the blaze brought down the building.

This included 11 members of the fire department’s Hazardous Materials Company No. 1 who were inside the South Tower evacuating people when it collapsed.

The Malay proverb about fire says, “Api bila kecil menjadi kawan, bila besar menjadi lawan.” Fire is a major concern for everyone, from the state planner and developer to forest departments and the public as a whole. Using four skylifts purchased from a scrapyard for about RM15,000, Liew managed to build three prototypes for fire fighting, defence and surveilance using the hydraulic systems, motors and frames with some modifications.

Called the MyBOT-X Fire Fighting Robot, the robot can be equipped with cameras, sensors, communication equipment, firefighting equipment and other loads in order to control fires, monitor the scene and search for victims.

Lim, who started Intellogic Technology as an importer and distributor of factory automation products in Malaysia, tells Metrobiz: “We have been actively collaborating with universities since 1999. This latest project combines Intellogic Technology’s expertise in electronic instrumentation with Liew’s mechanical engineering expertise and Tan’s research and development ability.”

The nozzle on the vehicle can be directed at different angles and elevated in order to fight fires at different heights.

It reduces the risks, such as high temperatures, toxic fumes, and dangerous environments, faced by firefighters. Started in 1996 with RM100,000 in capital, Intellogic Technology now has four branches in Johor Baru, Penang, Malacca and Ipoh where their staff are trained to run them as separate entities.

“We help our clients do the programming needed to replace manual labour,” he said.

Using food manufacturing as an example, Lim says automation offers many benefits such as standardised products at a faster pace.

It also prevents the introduction of pathogens and addresses hygiene issues while being able to meet stringent food preparation regulations.

“We replace a human’s vision with sensors, hands with actuators and develop a program with control sequences to replace human judgement by using PLC,” he said. Engineers inspecting the robot’s wiring before a test run.

Clients, however, will have to procure the actuator separately from another vendor.

Bringing similar expertise to the MyBOT-X, he said work first started with a parnership with UTEM in 2005 to work on a prototype sewer robot, which could be used to detect faulty sewage pipes.

The story of the MyBOT-X is one of serendipity.

Liew, who was bored and had time on his hands at the time, started tinkering with the idea of having a robot that could help in putting out fires.

Beginning with a prototype using four skylifts purchased from a scrapyard for about RM15,000, Liew managed to build three prototypes using hydraulic systems, motors and frames with some modifications.

The prototypes designed for firefighting, defence and surveillance eventually gained traction when a memorandum of understanding was signed with Utem in 2009 to look at ways to improve the robots.

The prototypes have gone through three modification exercises. 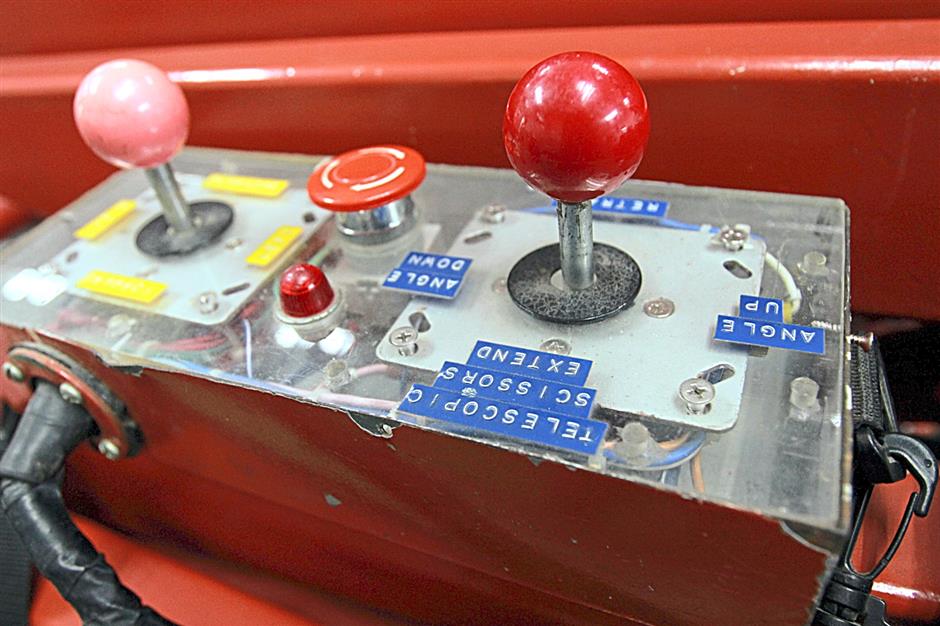 The controls for operating the fire fighting robot remotely.

Earlier examples include the MyBOT 1000, which weighed about one tonne and used two compressed water tanks, and the MyBOT-3000, which is about 700kg and comes with wider tracks to ensure better stability when it goes on inclined surfaces.

The vehicles have a modular design where the top part of the robot can be changed to cater for different purposes, such as carrying a weapon for defence purposes, or high-end detection and surveillance equipment for reconnaissance.

Currently relying on self- financing and research grants, it is estimated that RM20mil is needed to commercialise the robots.

Putting logic to use

Using his expertise in electronic control systems, Lim is working on a wireless control and monitoring system for the MyBOT-X.

He says, utilising wireless technology currently, the connection is not stable and when blocked by a wall, could result in a lost connection.

“We are working to use the 433MHz radio frequency which it is more stable and able to communicate with outside units when the robot is in a building from up to 500m,” he said.

The team is currently looking at putting on a demonstration at the Fire and Rescue Department of Malaysia headquarters after their initial demonstration for the Ayer Keroh Fire Department, in Malacca in 2009.