Tan and GAC Pindar coach Ian Williams at the launch of Edox during the Extreme Sailing Series 2014 at Singapore's Marina Bay recently.

IF EVER there was a watch brand custom-made to fit any rugged sport, Edox watches are definitely at the forefront.

With its 130-year-old history, the Swiss brand is well known for its precision, performance and innovation.

Edox’s story began back in 1883 with a simple tale of love. Christian Rüefli-Flury, an exceptionally gifted watchmaker, decided to give his wife, Eva-Maria, a pocket watch that he had designed himself for her 25th birthday.

Touched and impressed by the beauty of the gift, Eva-Maria persuaded her husband to start his own watchmaking company in 1884.

He named the company “Edox”, meaning “hour” in ancient Greek, and the hourglass logo has adorned all Edox watches ever since. 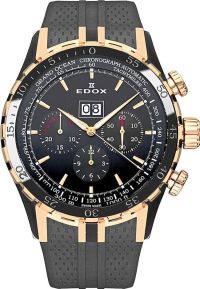 A major success of the Swiss Jura-based watchmaker is probably the famous Les Bémonts Ultra Slim, a timepiece featuring the slimmest calendar quartz movement. This world record is still unbroken to this day.

Since then, the brand has been producing fine, precision timepieces and is now the official timekeeper for the Extreme Sailing Series (ESS), Dakar Rally Raid and Class-1 World Powerboat Championships.

Last year, when Edox became the official timekeeper for the Extreme Sailing Series (ESS), the Grand Ocean collection was launched together with the limited-edition ESS timepieces.

Now, the brand is making its presence felt in Malaysia through Crystal Time, its Singapore-based watch distributor.

In conjunction with the ESS 2014, which kicked off in February at Singapore’s Marina Bay, Crystal Time unveiled the Grand Ocean collection to the South-East Asian market for the first time.

“As with any race, precision timing is an essential element and the 48mm Grand Ocean Special Edition is a striking example of Edox’s craftsmanship. 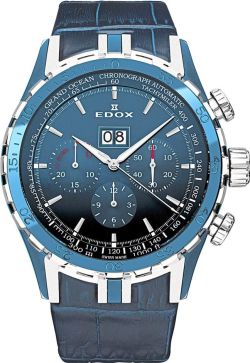 “Its inspiration was drawn from the complex structure of a sailboat.

“The precise mechanics of the watch is revealed via a unique ‘porthole’ on the caseback, that resembles a submarine window pod.

“Accompanying this is a specially designed engraving of a partial world map, signifying the grandeur of the ocean and Edox’s association with it via the Extreme Sailing Series,” Tan said.

A subdial at 9 o’clock is a vital tool for sailors; a display that counts down the four minutes to race time, while luminous hands and indexes mean easy reading in low-light conditions.

Boasting a 40 to 44-hour power reserve, this one mighty “engine” will last well into a race.

Hand-assembled at the Edox base in Les Genevez, the Grand Ocean Special Edition is water-resistant to 30 ATM (300m) and features a “toothed” black or blue rotating diver’s bezel for ease of grip. Catamarans lining up during the Extreme Sailing Series 2014 (Act 1) at Singapore’s Marina Bay.

It is highlighted with Triple horns as lugs, a unique feature of the collection that ensures superior fit of the leather embossed strap, which is made of a stitch-less bimaterial rubber-and-leather strap.

“At a price of RM14,150, the Grand Ocean Special Edition is elegant, for people who appreciate excellent quality,” Tan said.

In 2012, in conjunction with the Dakar Rally Raid, Edox launched the Chronorally collection that was designed and engineered to withstand the most extreme of environments; speed, mud, snow, shocks and heat.

This collection is an ideal choice for rally fans and sports watch enthusiasts as it is a superb amalgam of strength, style, precision and functionality.

“The newest Chronorally 1 — Chronograph Automatic, launched at Baselworld 2013, is the latest in the series.

“Powered by Valjoux 7750 automatic movement, the 45mm Chronograph Automatic is housed in a stainless steel case.

“Like the engines in the vehicles, this powers up the watch to endure extreme conditions,” Tan said.

The black carbon dial, with silver indexes, mimics the dashboards of the Dakar rally cars, while the rubber strap, with tachymeter scale imprints, further underlines the watch’s rally roots.

The strap also mimics the prints on a tyre, giving the watch a rugged feel that sits comfortably on the wrist of any driver.

The orange accents on the watch give the image of the desert sand as well as the extreme desert conditions where the Dakar race takes place.

It also adds a playful nature to the wearer where the racers have fun with speed.

The caseback resembles a car wheel and oversized push buttons are positioned, along with the crown, on the right side of the watch. 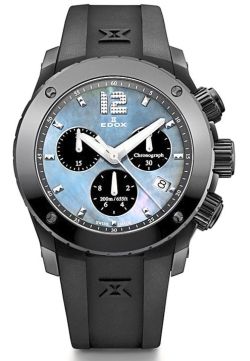 Class 1 Choronolady is an elegant circular faced watch perfect for women on the go.

Additional details such as the engraving of “start/stop” bring to mind that of the stop watch and the importance of timing.

The Chronograph Automatic fits the wrist perfectly and can be worn over a driver’s race suit, while the oversized buttons allow easy access through the Dakar racers’ driving gloves.

Whether you are charging through the desert or just taking a Sunday drive with the family, the Chronograph Automatic delivers an exceptional, robust sports watch experience.

“At the end of the day, someone who invests in an Edox timepiece is also investing in a lifestyle.

“Technical perfection, aesthetics and functionality have brought Edox watches to where it is today — a timepiece relied on by champions,” Tan said.