Nightspot focuses on stripping away complexity in food

Stripped: The new Naked Restaurant and Bar has been serving their versions of nude gastronomic delights almost every night, and day.

THERE is something intrinsically liberating when it comes to stripping things away.

If this was referring to the human body, it would usually insinuate something suggestive, but in this case we’re talking about food — food that is almost as pure and natural as its original form because it has been stripped bare of the usual preservatives, artificial flavours and other unknown ingredients.

New Zealanders call this “Naked food”, which refers to fresh and unprocessed ingredients. It is something that’s all the rage now as health-conscious consumers seek alternatives to unhealthy processed foods.

Even celebrity chef, Jamie Oliver, who is known as the “Naked chef”, is famed for his recipes that are uncomplicated and healthy because he chooses not to use preservatives and articicial flavours found in commercially prepared food.

Keep it simple, keep it naked

The rising popularity of this style of food is the driving force behind the new Naked Restaurant and Bar in Plaza Damas in Kuala Lumpur has been serving its version of nude gastronomic since its recent opening.

The concept behind Naked Restaurant is really within the purest sense of the word “naked” itself, says the restaurant’s PR and marketing consultant Poonam Balan.

She says, “In a nutshell, when I think of the word ‘naked’, the word ‘bare’ seems to follow naturally. I then saw the opportunity to tap into the core of our team’s lives, experiences and seek out what we all ultimately want in a hang-out spot; an environment that is exciting, elevating, and most of all inclusive.”

One prominent feature of the restaurant is the large sign that shows two attractive and apparently unclothed women with a large portion of their bodies obscured by the “Naked” banner. 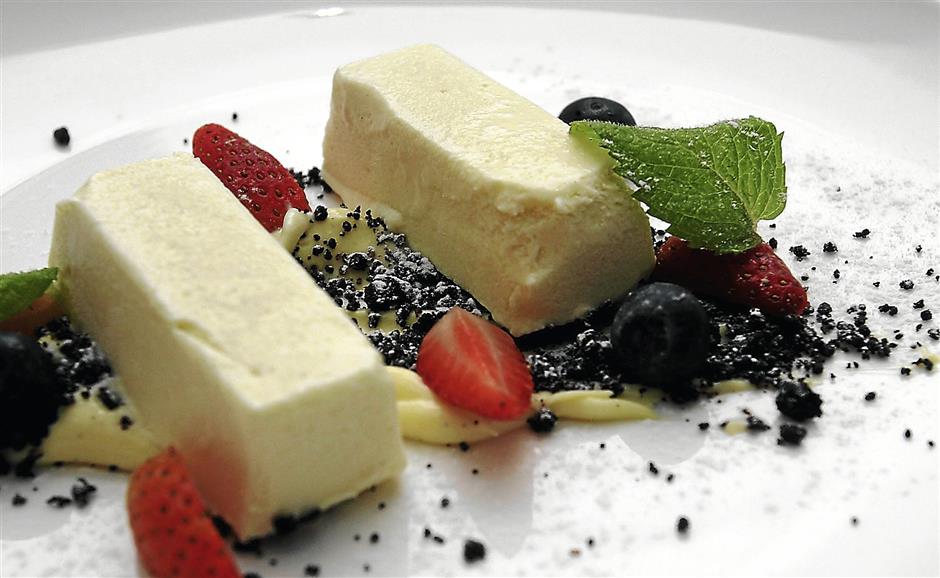 Sweet treats: The restaurant serves a range of appetisers, mains and desserts.

While some might be drawn by the advertising, those in the know are there to enjoy the food and drinks. The menu features dishes such as the Cali Crunch, an appetiser of citrus herb marinated tempura fried squid, tossed with a micro salad and fresh basil; the gluten-free Naked house salad; the garlic and herb Naked house steak; and their tantalising selection of pizzas, sides and desserts.

Besides food, patrons also gather there after a long work day to chill out to the music played by DJs or sit back for the line-up of performances for the night.

Culinary nudity at its best

The restaurant owned by The Seduction Restaurant Group Sdn Bhd has already received good feedback from its patrons.

Its ambiance exudes a youthful and chic appeal with simple but polished interiors that are sleek and inviting.

Trying to communicate the true essence of the restaurant and its food to future customers was surprisingly easier than expected even with the sauciness of its name.

“Naked is more than just about sex. The Malaysian public has passed the stage of evaluating a brand or concept just on first impressions. And yes we were going for the ‘Wow’ factor, but people do understand when its explained that the ingredients are ‘bare’ and unprocessed so they are fresh,” said Poonam at the official launch of the restaurant recently. The man behind the food: Richter previously created the menus for another well-known KL restaurant.

“Patrons should feel at ease and that they are among friends. The whole idea behind Naked is a place where customers and the team remain approachable and are able to be bare — in a way that is unpretentious.

“We want our patrons to feel as comfortable as the team does. We would like the brand to evolve and suit its clientele over time and we trust that our patrons will tell us what they want,” said Poonam.

Although the food is about simplicity, acquiring the location, which was previously a hair salon, proved to be a challenge when it came to redesigning the space to become a fully fledged F&B outlet.

“Most of the challenges were infrastructure oriented. Fortunately we had a talented designer who created the ambiance. But from the get go, we’ve had to boost the electricity supply to accommodate the restaurant, and really work our way up. What helped us was sheer determination and the understanding that each of us were brought on to see this project through until it becomes successful,” said Poonam.

The idea to start the restaurant was initiated by entrepreneur Marco Robinson, originally from the UK, who found that there was a lack of healthy, fresh food outlets that would appeal to him and his friends.

A resident of Plaza Damas and, he connected with the managing director and mixologist Joshua Ivanovic, chef, Nigel Richter and Poonam to form the brand and business.

“Everyone here is edgy, passionate, youthful and live healthily. They have their own flavour of life — and the brand is a combination of these four individuals with their own zest for life coming together as one,” explained Poonam.

Richter, from British Columbia, Canada, is no stranger to creativity. He is known for the Dining in The Dark restaurant on Changkat Street where he was the chef who churned out new 12-course menus every month, serving a full house six days a week.

Richter is also a professional skateboarder and snowboarder, but food remains his main love. Trained in classical French cooking, he believes that a balanced meal is as important as a balanced lifestyle. Swift hands: Ivanovic is a world champion English mixologist who began his career in hospitality at the age of 16 in 2005.

What sets the food apart is that it is inspired by the freshness of recipes found in the west coast of North America where fresh ingredients are paramount to good taste and health. This is when the natural taste and flavour found in produce is enhanced, as opposed to depending on the use of flavour enhancers.

Meanwhile, Ivanovic, has been gifted with the dexterous ability to mix some of the most complicated and unusual cocktails.

He is a world champion English mixologist who began his career in hospitality at the age of 16 in 2005. He moved to London and soon found his passion behind the bar as a cocktail bartender.

He spent the next six years mastering the art and went on to work in some of London’s highly acclaimed and five-star F&B establishments, some that were graced by A-list Hollywood celebrities.

He is the 42 Below Cocktail World Cup UK Champion and won the global title in New Zealand that earned him the title of World’s champion mixologist and the Appleton Estate Global Bartenders Challenge in Jamaica.

In late 2010, he moved to Kuala Lumpur and used his creativity to set up the company, Cocktail Solutions Sdn Bhd, which produces bespoke ready-to-drink bottled cocktails as well as offering original cocktail catering service and consultancy.

Robinson, author of the book Close the deal and suddenly grow rich, is also a DJ, model, restaurateur, and philanthropist. His is a story from rags to riches as he left school at 16 with no qualifications, a poor family and several broken homes. But he persevered through the hardship and became a successful entrepreneur and founded Wealth Revolution Group and other businesses. He is equally passionate about the FEME Foundation (Female Entrepreneurs Made Easy) that seeks to empower women to become business owners.