By CHEE SU-LIN For Watch This Space

THE recent budget dropped a double whammy for property buyers — an increase in real property gains tax (RPGT), ranging from 30% to 15% within five years, and the prohibition of Developer Interest Bearing Schemes (DIBS) where developers pay for interest on buyers’ loans during construction.

What will be the impact on the property market?

According to property consultants CH Williams Talhar & Wong, an increase in RPGT will cause property transactions to drop, as they did this year when RPGT was increased in Budget 2013.

Indeed, outside of stampedes on projects like Sime Darby’s Bandar Bukit Raja, YTL Land’s The Fennel, SP Setia’s Seri Mutiara apartments in Setia Alam and Setia Eco Hill in Semenyih as well as Eco World’s debut previews, the market over the last two years has cooled compared to the bull runs of 2010 and 2011.

This was from around 136,000 units to about 119,000 units, according to the Finance Ministry’s National Property Information Centre (Napic). The number of home sales dropped by about 16% in Selangor, and by almost half in Kuala Lumpur.

“Before that, it was a bit of a free-for-all. Anyone could get all sorts of loans, especially in the primary market.”

In terms of value, however, the value of total home sales stayed pretty constant throughout Malaysia and Selangor in the first half of this year (1H2013), compared to 1H2012, although they did drop about 26% in Kuala Lumpur.

Indeed, according to Napic’s house price index, house prices increased every year since 1988. Outside of 1998 and 1999, in the wake of the Asian Financial Crisis, the index has increased even in years when the total values of property transactions dropped, such as 2001 and 2005, albeit marginally.

Some industry watchers also believe that there will be a surge in demand next year, before the goods and services tax (GST) is implemented in 2015.

“We do not think property prices will correct, but rather stabilise allowing a greater pool of buyers to come on stream,” suggested Kenanga Research in its post-Budget analysis.

“For selected hotspots in Kuala Lumpur, property prices are not four times the average household income, but 15 times!

“Even for highly popular areas like Bangsar, there has to be a limit. If Bangsar is RM1.5mil, people want to live there, but are you saying that if the price is RM3mil or RM10mil, will people still want to live in Bangsar? At some point, it has got to stop.” 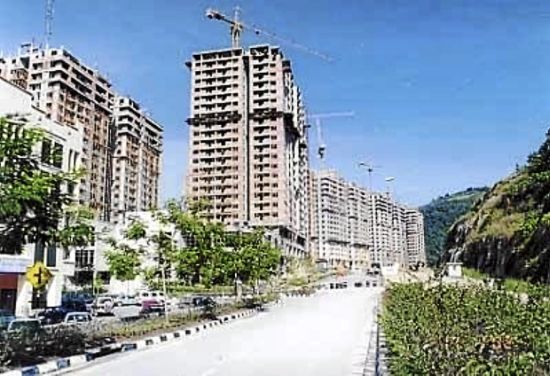 Taking shape: More properties are coming into the market next year.

One property that has purportedly dropped its prices is a beautiful condo development located behind my own.

It sits on a hilltop within a quiet and low-density neighbourhood, within striking distance of Bangsar, Damansara Heights and Mont’Kiara. For many, you can’t get a more desirable address than that.

The property itself is gorgeous with all the mod-cons — exclusive lift lobbies where access cards open only to your apartment, video intercom, fibre optic backbone, and the like. Even though the development was completed about three years ago, more than 60% of the tower is empty.

“This tower was originally bought en-bloc by a tycoon who intended to re-sell for profit, but it is taking some time because they are all big units of more than 2,000, sq ft,” said a source close to the development.

“Now, the bank is also involved in the sale, and although the developer’s last price was over RM800 per sq ft, the price has recently been reduced to RM720 per sq ft.”

Another condominium in a central Damansara Heights has been quite empty since being handed over in 2011. A total of 92 out of 318 units are occupied, which works out to under 30%, said a source close to the development. In fact, there are still developer units available for sale. The majority of sub-sale owners here are foreigners, including investors, from Europe and Singapore, as well as block owners holding between 25 to 40 units, who engage agents to market their units.

Too many luxury condos

Many times, owners of apartments such as these would rather hang on to their investments in the hope of selling for a profit, than look for tenants, reckoned Siva Shanker.

“We as estate agents often go to these owners and ask them, ‘Would you like to rent your unit?’ They say, ‘No, no, I want to sell!’ and we say, ‘But you’re getting nothing for it now, why don’t I bring you a tenant that will give you at least RM6,000?’ Maybe they don’t want to spend RM150K to renovate, put in kitchen cabinets, wardrobes and all that. They just leave it and don’t care.

“It’s a distortion of the market,” admitted a young developer. Too much money speculating on property, while the main core of market cannot afford those prices.”

“The worst part about it is when absentee buyers don’t pay management or maintenance charges. Sometimes, they say there’s no income from the unit so they don’t want to pay. The result is dilapidated facilities and a security concern for those few units that are occupied.”

Even developers don’t like properties that stay empty after being handed over.

“We don’t want it empty,” said one representative of a leading developer, “It doesn’t look good.”

Even if owners are willing to rent, the average occupancy rate for existing luxury condominiums in KL has been on a downtrend since 2008 except for the Kenny Hills area, according to CH Williams Talhar & Wong’s Property Market Report 2012.

“This is because new units were entering the rental market at a faster rate than the slower projected demand from working expatriate professionals entering Malaysia. Furthermore, many more luxury condo units will be completed in the Klang Valley this year,” the report said.

And the market for commercial property is also not spared. With its luxurious, fully-glazed and curved facade, this office building is a looker located just next to the Sprint highway, opposite Tropicana City Mall.

Yet, even though it was handed over to its strata title owners early this year, it is still only about 10% to 20% occupied, said an estate agent who sells units there.

Signs recently came out for a furniture retailer to take up the ground and first floor, while one floor was sold to a Japanese company, she said. Nevertheless, the rest of the units remain empty.

Unsurprisingly, prices and rents have dropped. Launched at about RM270 per sq ft, owners had originally listed the units for RM550 per sq ft, but some of them are now willing to go down to RM440 per sq ft, she adds.

These prices going down are just asking prices, however, says Siva Shanker.

“In reality, many of the good locations stayed flat in transacted price. People are still making money compared to what they first paid.”

Given the banning of DIBS and tighter credit controls, loans may be less and less easy to come by, but prices may ideally approach fundamental values and keep the market moving.

The increase in RPGT will also make it more attractive to rent than flip.

“Instead of trying to sell at a high price, rent it out for the next two to three years. Don’t leave it empty. Get rental income,” advised Siva.

Hopefully this ultimately means all those properties we are told are so scarce and in-demand but end up empty will, rather than just being owned and held, actually be occupied and lived in. It just seems to make more sense, doesn’t it?

Is now the time to take advantage of an uncertain market?

* Check out all the latest real estate projects and discussions about the impact of Budget 2014 at Star Property Fair 2013, happening from Nov 8 to 10 at KLCC Convention Centre. More information from fair.starproperty.my. Contact the writer at sulin.chee@thestar.com.my.