Father of two leaves cushy job to concentrate on peanuts

IF A father of two told you he was going to leave behind a cushy corporate job to begin a small startup producing and selling perishable goods, you’d most likely think he was nuts.

But for Alzari ‘Joey’ Mahshar, that would not be an insult. In fact, he would most likely agree, and ask you to try a jar of Joey’s Homemade Peanut Butter.

Children and adults alike love the salty-sweet protein-rich paste, eating it spread on toast or right out of the jar. Joey is just one of these many adults, but he’s taken his passion to another level.

“I love peanut butter and I’m crazy about it. But it’s hard to find peanut butter with just the right amount of sugar, peanut flavour, and chunkiness,” he said.

Formerly with a telecommunications company, where he’d worked for 13 years, the 43-year-old quit after several months of experimenting with making peanut butter thanks to a dare from his colleagues.

“It all began when my colleagues issued a challenge. They were from the Philippines, which is quite well-known for homemade peanut butter. They said theirs was the best, so of course I had to try making my own,” Joey said.

“I kept experimenting with sugar and peanut levels, how much salt, how chunky to make it — and all the while my colleagues got free peanut butter to eat. When I finally hit on the right recipe, they said they loved it so I thought hey, why not market this? And I took the leap,” he said.

Joey takes orders via Facebook and Twitter, leveraging off his wide social network and hoping word of mouth will deliver the good news.

He delivers the jars himself anywhere in the Klang Valley, but there’s a minimum requirement of two jars per order. But you might just want to try your luck if you live out of state — Joey has shipped the goods as far as Sabah and Sarawak. 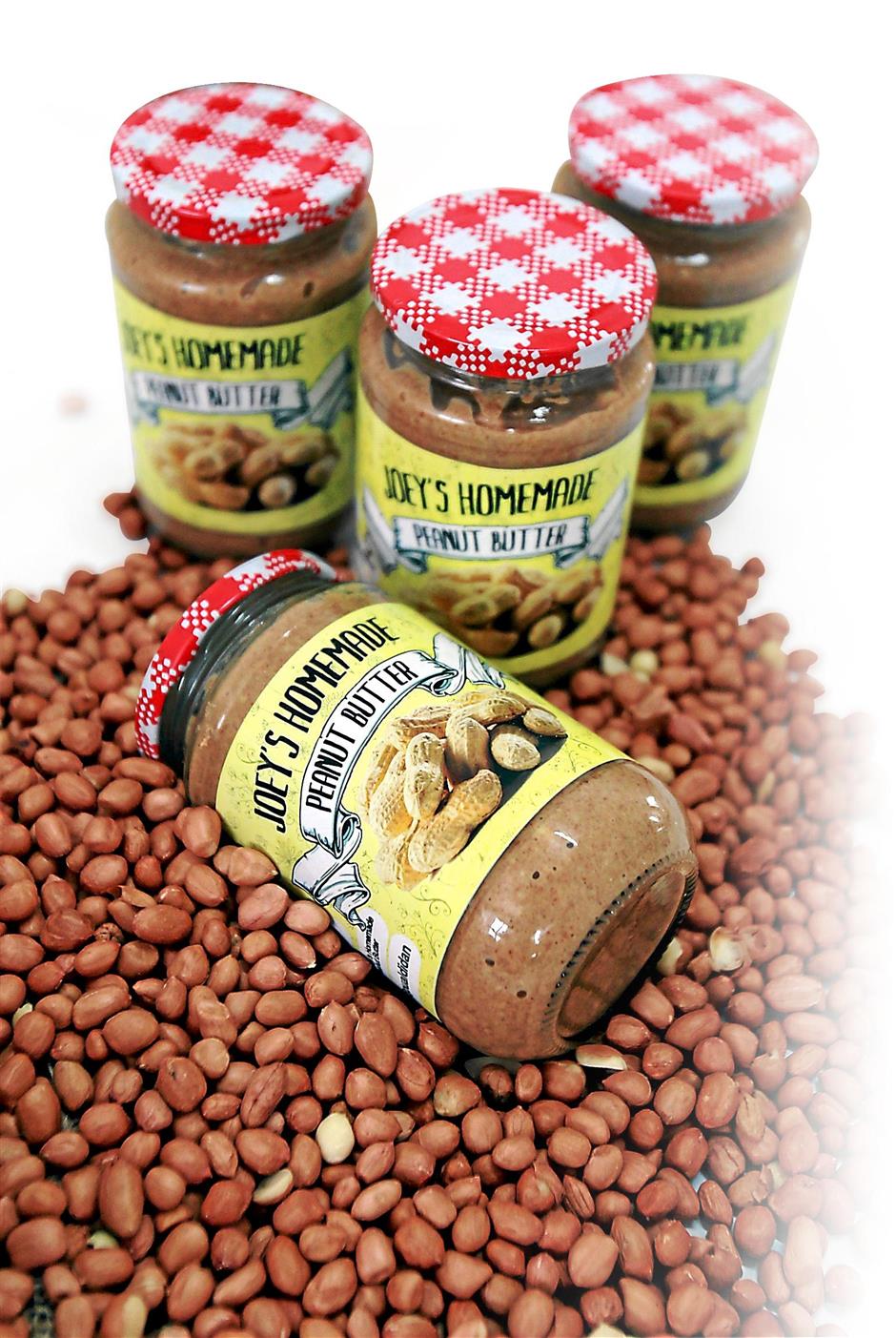 A matter of taste

The special balance of ingredients in Joey’s Homemade Peanut Butter have been carefully crafted to suit his personal tastes.

He spent months sourcing for the perfect ingredients, which may sound simple — oil, sugar, salt and peanuts — but, as he discovered, are a lot more complex.

“The peanuts are from India, and so is the salt. At first, I looked at peanuts from China as they were very fragrant, but the flavour wasn’t as pronounced or nutty as the Indian ones.

“I also had to experiment with the oil used, since there are so many varieties like peanut and sunflower. I settled on sunflower as it has a clean taste,” he said.

Failures he encountered included over-roasting the nuts, or using types of sugar that resulted in a bland peanut taste.

“There are so many types of sugar such as molasses and cane and even the brand makes a difference. Salt, too, has variance in taste.”

The sugar Joey uses is a local cane sugar, but many of his fans prefer the pure pronounced flavour of peanut, and plump for the sugar-free option.

“A lot of buyers want their peanut butter customised, which is easily done. Right now, I make crazy chunky and awesome smooth varieties, and you can opt for either to be made sugar-free,” Joey said.

“I made the sugar-free option for a friend whose nine-year-old son has diabetes. I also can meet dietary demands if there are any.”

At RM13 a jar, it’s currently the cheapest artisanal peanut butter in the market. In order to keep things going smoothly, Joey treats the small enterprise like a day job.

“I wake up early in the morning and make the peanut butter. I spend the rest of the day making deliveries, and ‘clock out’ in the evening. I have to apply the same discipline I had in the corporate world to this business.”

Joey begins by sorting through a 5kg pack of shelled peanuts, picking out the good ones from the spoiled ones. This process takes time, and he’s careful not to get any bad ones in the mix.

Then, after roasting the nuts for a minimum of 20 minutes and cooling them, he grinds them at a certain speed and temperature to break them down into just the right texture and consistency.

“Then I add some sunflower oil and salt, stir, and pipe it into jars.” Exacting measure: Joey ensures each jar has a standardised content of 350g of pure homemade goodness.

Joey labels the jars himself, sealing them tight before transporting them. In each 350g jar of peanut butter, there’s at least 300g of roasted ground peanuts.

Because there are no emulsifiers added to the mix, Joey’s Homemade Peanut Butter must be consumed within six months.

Joey believes the problem with commercial mass-produced peanut butters is the amount of preservatives, flavourings, stabilisers and emulsifiers added into the mix.

Although these additions prolong the shelf life of the product — for years at a stretch — Joey prefers a freshly-made flavour and richness in taste you can only obtain by making it yourself.

“My peanut butter spreads smoothly, and doesn’t stick to the roof of your mouth.”

His homemade peanut butter doesn’t need to be refrigerated, either.

Although many quit their day jobs because they are just tired of working for someone, Joey was spurred by pure passion. He took a leap of faith and is thankful that he has been making enough to keep the business afloat — about 45 jars a day, a number he attributes “to social media and friends”.

“I ended up formulating something I really liked, so I wanted to share it. It’s as simple as that.”

His two sons love the peanut butter as well.

It is important to him, too, that his peanut butter is affordable. Although some artisanal bakeries and stores sell homemade peanut butter, Joey said his research showed that a small jar could retail for up to RM25.

“Good wholesome food should come at an equally wholesome price! Quality food should be accessible to everyone, not just a certain class of society,” he noted.

A giver at heart, Joey is now in talks to bring his peanut butter to two orphanages.

“I’d like to make sure these kids have something good and hearty to eat. I’ll produce my peanut butter at a small cost just to cover overheads and this way I’ll be able to give back to the needy.”

Joey runs his small business like a large company, covering both corporate social responsibility and entrepreneurship.

He’s even starting them young by instilling knowledge of the business in his enterprising teenage son!

“My son gets a cut for every jar he sells. Because my peanut butter is sold via word of mouth and social media, good reviews keep me going. Some of my son’s friends and teachers at school have tried my peanut butter, and so far quite a few have bought jars. For every order issued through him, he gets a cut,” Joey said.

It’s always a risk relying on social networks to spread the word, but Joey enjoys communicating with buyers and fans.

“One of the fun parts is all the weird recipes people come up with,” says Joey, relating a particularly odd recipe.

“One of my friends mixes a big spoonful of peanut butter with instant noodles!”

Others eat his peanut butter spread on toast or apples, or right out of the jar. Some eat it with roti canai, and a few use it to bake with.

Popular burger chain FlameGrilledBurgers (which has outlets in Taman Tun Dr Ismail and Setapak) also uses Joey’s Homemade Peanut Butter on their patties, a mix that may have many wrinkling their noses.

“But why not?,” asked Joey, “We dip our satay in peanut sauce, this is just a different take on a classic taste.”

“I mainly use it as a dip for crackers because I am lazy! Sometimes, I mix it in with my morning oatmeal though, for a really healthy breakfast that keeps me going.”

Steven Aroki, a general manager in his 40s, thinks Joey’s Homemade Peanut Butter stands out from commercial brands because it’s smooth and gooey, without the dry after-taste supermarket brands have.

“You can really taste the peanuts,” he said.

Joey is ambitious about his business, and is working to diversify and see it succeed. Currently, he is perfecting a recipe for grape jelly.

“I had to search for a good halal gelatin I could use,” he said, adding that the jelly would complement his peanut butter perfectly.

His reasoning? What’s better than a peanut-butter-and-jelly sandwich?

He is also experimenting with other spreads.

“We don’t have a large variety of nut-based butters here, which I’d like to try and change. I recently made a cashew nut butter, which was delicious — but the high cost of the nuts means the final product will be extremely expensive!”

Looking forward, Joey is working to register as an SME and obtain halal certification. He also hinted that his peanut butter “may soon be in cafes”.

Hoping to one day see his peanut butter served in hotels or on airlines, Joey now never leaves home without his cell phone and “at least 10 extra jars of peanut butter.”

“Once I was eating lunch in Bangsar, and had several delivery orders with me. A group of customers kept staring at me, so I took the opportunity to go over and explain what it was I do. I ordered some toast from the kitchen and let them try the peanut butter — they loved it, and bought some jars on the spot,” he said.

Joey maintains that his product is a simple one with a simple, but rich and satisfying, taste. Peanut butter, he feels, speaks to the child in all of us, conjuring up fond childhood memories.

A wholesome sweet treat that he’s passionate, and perhaps just a little bit nutty, about, taking that leap of faith into being his own boss was fuelled by faith in his product — and the conviction that others would share his enthusiasm.