Bring on the heavies

At the SSL workshop, foremen in the process of fixing the top of an excavator to its bottom counterpart. Salaries for experts i

SIMPANG Pulai near Ipoh is said to be one of the most concentrated centres for buying used heavy machinery. The pioneering companies that got the ball rolling back in the late 1970s and early 1990s were SSL Heavy Machinery, Chong and Ho, Sun Ma, and Mun Fatt (now known as Changlin).

Today, the scene has become more robust, with 30 companies occupying the Simpang Pulai stretch of Jalan Raja Nazrin Shah, offering equipment for earthworks, mining, construction, quarries and plantations. Rovin Choi, general manager of SSL Heavy Machinery, recounts how his father-in-law, who started business as Ho and Sons during the1970s in Jelapang, Ipoh, rose from backhoe apprentice to end up as a bankrupt only to re-emerge as a leading player in the used heavy machinery business.

“My father-in-law, David Ho, now 58, was only 14 when he became an apprentice backhoe driver for RM50 a month. His job was to pump grease into the metal joints to keep them lubricated, check tyre pressures and make sure the engine was working well. He also had to wash the driver’s clothes, and at the beginning of every month, buy him a bottle of Guiness Stout,” says Choi who joined the company in 1998.

Forty-five years ago, such was how bosses determined an assistant’s worth. Things worked along the lines of a sifu-disciple relationship. As there were only 10 to 20 machines in the whole country back then, employers had the upper hand.

“No way can you get away with this today,” smiles Choi.

Attitudes changed in the 1970s. In Simpang Pulai’s case, it was attributed to the tin mining boom and the opening of plantations and roads in Kuala Lumpur and Kepong. 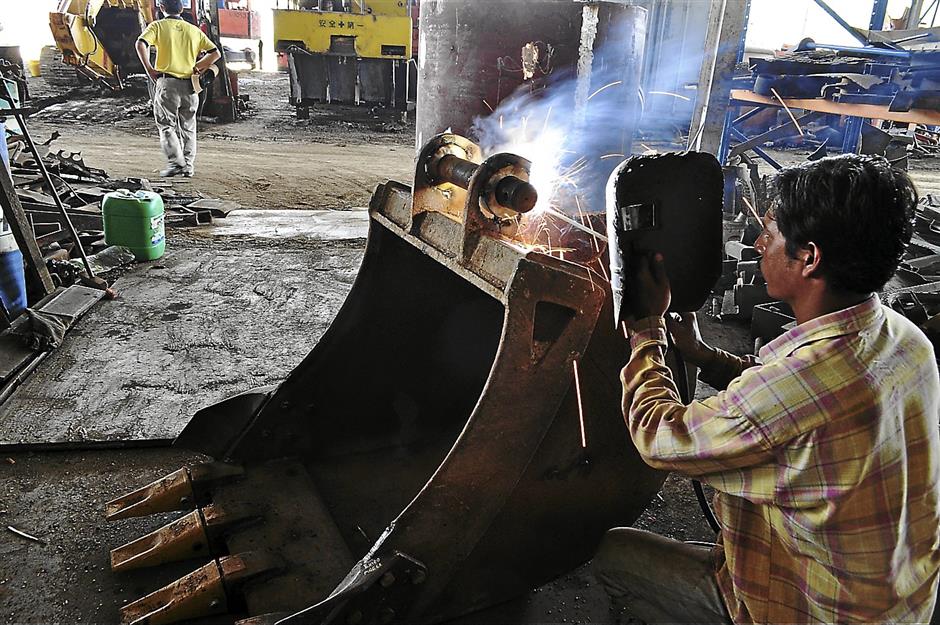 Welding a backhoe bucket: In an industry rife with the practice of giving ‘coffee money’ the SSL company policy is made to stick to solid principles.

Choi said, at the time, countries such as Canada and the US were seeking markets for used machinery in developing countries and Malaysia was a choice destination.

Up till today, the price difference makes second-hand machines a choice pick for short-term projects, compared to buying new, which can cost three times more. For example, the price of a second-hand Virtgen 2000 milling machine to remove asphalt is between RM550,000 and RM600,000. A brand new one will easily touch RM1.5mil — without air-conditioning.

New machinery from Sime Darby’s Tractors Malaysia, UMW’s Komatsu and Toyota forklifts, and Tan Chong TCIM which brings in Sumitomos, are usually reserved for long-term projects that will take at least three years.

In this landscape, eagerness and skill brought Ho and a willing Canadian investor together. The Canadian provided the financial backing for his first buy-and-sell venture.

“Business was good, and to inspire trust within the market my father-in-law undertook to become the guarantor for his customers. All went well until a global recession in 1985, when projects came to a standstill. Without work, the machine owners had no means to repay their bank loans. As my father-in-law was the guarantor, he was held liable. In the end he owed the bank RM18mil and was blacklisted,” recalls Choi.

But something Ho did back in 1980 saved the business.

In the search for an honest dealer, Ho’s principals from Japan and Canada had tested him with a shipment of three backhoes. In prior communications, Ho was told the machines were in a terrible state and an additional payment of RM20,000 had been added to each to pay for repairs.

But when the shipment arrived Ho opened the containers to find all three in good condition. He immediately called his principals and returned the RM60,000 that was meant for spare parts and new paint jobs.

“By maintaining his integrity, my father-in-law gained their respect and trust,” says Choi.

So, when Ho fell into financial difficulty, the same principals came to his rescue.

“They told my father-in-law they had done the same thing with other dealers. None gave them a refund,” says Choi.

With foreign backing, Ho found new means to restart and expand. As he had proven himself an honest businessman, the deal was to put the company and all its dealings under Ho’s name while his financiers backed him up with capital.

The first thing on the agenda was to secure a location to house a dealership — a tract of land large enough to accommodate an impressive array of excavators, rollers, pavers and crushers that could weigh between five and 20 tonnes each. He also had to think of allocating space for repairs and storage of heavy-duty parts. Coming down fast: The heavy machinery business has a robust second-hand market as only projects spanning over three years will buy new machines.

“This was in 1989 and the market price for land in Simpang Pulai then was RM30,000 per acre. The challenge in purchasing the site was that a lot of land was inherited. This caused a myriad of problems because to buy maybe one acre, you’d have to go to several owners. Without passion, it would have been easy to give up. Among the setbacks was when one landowner, a Malay lady, wanted double the price because she was in ill health and needed the money for treatment. By right, my father-in-law could have pressed her into giving him a lower price, but it was against his principles to take advantage of the misfortune of others.

“So, he bought the land. Of course this did not augur well with other land buyers who accused my father-in-law of spoiling the market, but he stuck with his decision,” says Choi, whose showroom and repair facility now spans 15 acres.

Ho’s perseverance paid off because the late 1980s up till the mid 1990s was boom time for the heavy-machinery industry. Annual sales at the time reached, with a 5% commission for each machine.

“Our showroom, which then measured four acres, was so packed there was only enough room to walk sideways,” recalls Choi.

But in 1997, the Asian financial crisis again caused development to come to a grinding halt. By this time Choi, who had married Ho’s daughter, Carmen, witnessed firsthand how his father-in-law changed strategies. Instead of selling to locals, he switched to exporting reconditioned machines.

“Because of the Asian financial crisis, customers who had bought machines from us could not settle payments. So they sold their machines back to us to pay their bank loans. Then, my father-in-law had already found a ready market in the US and Canada which were not affected by the ringgit’s plunge. At this time, my brother-in-law, Nicklaus, an electrical engineer graduate from the University of Nottingham started a venture to sell our machines to other countries online. This was in the very early days of Internet where we were still using the 56k dial-up modem. He also bought the first digital camera which cost close to RM10,000. One picture took about two hours to load. It was in this way we communicated our prices and shipping costs to our foreign buyers,” says Choi. 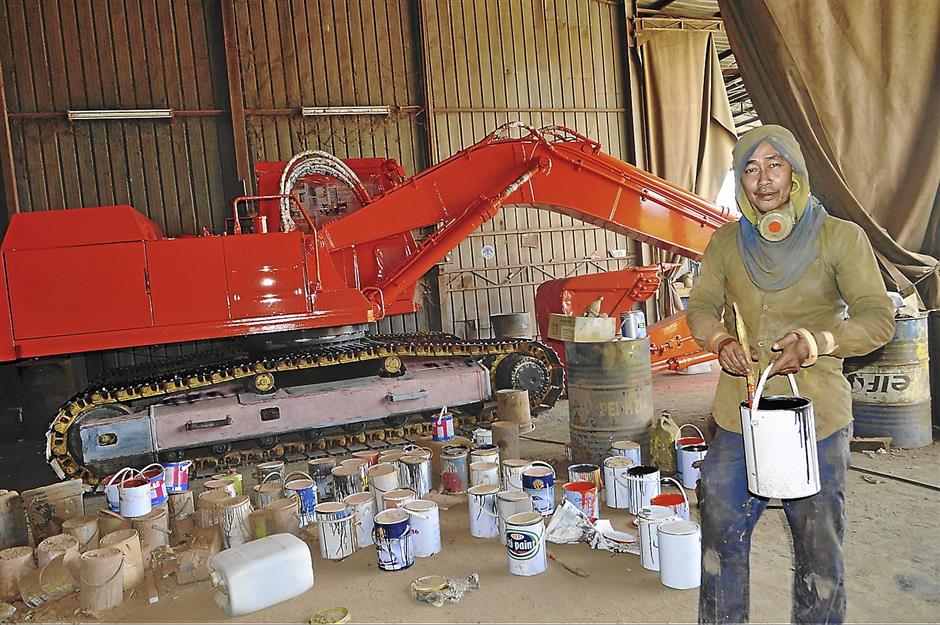 Repainting in progress: A new paint job for second-hand machines adds up another RM5,000 to the cost, but for their operators it is a great morale booster.

In a business that had so heavily relied on the personal touch, Choi recalls it took his father-in-law some time to get used to never even meeting his customers, some of who were based in countries he had never heard of before.

“There was one case when he got cheated of RM200,000 by a Vietnamese buyer. This is why the company’s policy now is to ensure we receive cash before releasing cargo,” says Choi.

On the touchy subject of “coffee money” — an open secret in the industry — Choi says buyers should be aware of unscrupulous foremen who have prior agreements with dealers to endorse vehicles, though they do not meet required standards.

At SSL, the company policy is to sell a machine because it can work, not because one has treated a client to nightly entertainments or has given inspecting foremen enough “coffee money”.

“Again, my father-in-law learned this from past experience when he was driving his first machine, a Case backhoe back in the 1970s. Though the guy who sold it to him knew the gears were faulty, he did simple welding so it would last for another three weeks. The gear finally gave way and he had to fork out another RM4,000 to repair the gear box. He had to borrow money from loan sharks to pay for repairs and the debt took him four years to settle. This incident taught him how dishonesty and greed can cause others much hardship,” says Choi.

In the end, trust is the key to sustainability.

Today, SSL reports annual sales of RM10mil to RM15mil and Choi is optimistic the industry will see even better prospects in the future.

Choi says there are many areas for growth. The primary focus is on the demand for heavy machinery for earthworks and infrastructure development.

“In Perak alone, one month sees close to a few thousand projects being carried out at one time,” says Choi.

At the secondary level, there is the robust aftermarket for the machinery, provided dealers know how to invest in the right brands. Currently, coveted brands include Case, JCB, Caterpillar, Komatsu and Sumitomo. At one time Hitachi heavy machinery was so sought after that dealers had to hire armed guards to prevent theft. Now, the second-hand price of a backhoe can range between RM40,000 and RM150,000.

And let’s not forget spare parts like nuts, bolts and buckets. A pair of sprockets to turn tracks, for example, can cost RM15,000 to RM20,000 per set inclusive of motor.

As a last resort, when a machine is worked to the bone and beyond repair, it can always be sold off as scrap iron. Today, the market price of scrap iron is RM1,500 per tonne and a junked backhoe can fetch about RM5,000.