“The current scenario, particularly uncertain on the fiscal side, requires serenity when evaluating risks,” policymakers wrote in a statement accompanying their decision. — Reuters

The bank kept the benchmark Selic at 13.75% for a third consecutive meeting late on Wednesday, as expected by all analysts in a Bloomberg survey.

It was the last rate decision before Luiz Inacio Lula da Silva assumed the country’s presidency on Jan 1 and it followed a tightening cycle that added 11.75 percentage points to borrowing costs until September, when policymakers paused.

“The current scenario, particularly uncertain on the fiscal side, requires serenity when evaluating risks,” policymakers wrote in a statement accompanying their decision.

“The committee will closely monitor future developments in fiscal policy.

“In particular, its effects on asset prices and inflation expectations, with potential impacts on the dynamics of future inflation.”

Board members led by Roberto Campos Neto are considering, on one hand, the delayed economic impact of past rate hikes, and growing investor anxiety about Brazil’s fiscal outlook on the other.

Such concerns are leading economists to revise up inflation estimates for 2023 and traders to price in new rate hikes starting in February.

“Annual inflation will steady, and we won’t see deflation as significant as what we saw this year,” Mirella Hirakawa, an economist at local asset manager AZ Quest Investimentos, said prior to the decision.

“Up to March, the level of fiscal uncertainty will only grow, so they should stay hawkish.”

Annual inflation eased to 6.17% in early November from over 12% earlier this year, according to the national statistics agency.

Still, transportation costs rose again, indicating that the positive impact from tax cuts on costs of utilities and fuel are waning, and economists see consumer prices rising above target through 2024.

Congress is currently debating a bill that would raise the public spending cap by roughly 145 billion reais (US$28bil or RM123bil) to help finance Lula’s campaign pledges, including payouts to the poor.

In that context, Campos Neto has called for “coordination” between fiscal and monetary policy.

He warned that uncertainty on public expenditures may harm employment and activity. — Bloomberg 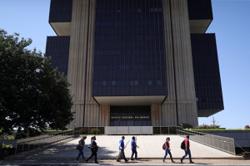