The Caixin/S&P Global services purchasing managers' index (PMI) fell to 46.7 from 48.4, marking the third monthly contraction in a row. The 50-point index mark separates growth from contraction on a monthly basis.

The figure echoed weak data in a larger official survey on Wednesday, which showed services activity fell to seven-month lows.

New COVID-19 infections hit record highs in November. Analysts at Nomura estimated that areas in lockdowns accounted for about a quarter of China's gross domestic product (GDP) by the end of the month, choking domestic consumption, disrupting supply chains, and even stoking rare street protests across many cities.

"Since October, the impact of COVID outbreaks has taken a heavy toll on the economy, and the challenge of how to balance COVID controls and economic growth has once again become a core issue," said Wang Zhe, senior economist at Caixin Insight Group.

An easing of anti-virus curbs in some Chinese cities in the last few days has been met with a mix of relief and worry, as hundreds of millions await an expected shift in policies after widespread social unrest. Most analysts believe the road to an eventual reopening will be long and bumpy, and warn a further surge in infections this winter could see measures tightened again.

Companies in the Caixin/S&P survey reported the strongest falls in output and new work for six months, and continued to cut staff as confidence in the outlook for the next 12 months fell to an eight-month low.

The rate of job losses was the quickest seen since the survey began in November 2005, pointing to further strains on the labour market.

One bright spot was that export business returned to growth from contraction in October, partly due to the relaxation of international travel rules.

Beijing has softened its stance on the stringent COVID-19 measures after widespread protests with some eases in virus policies on testing requirements and quarantine rules in a marked shift in several places in Chinese cities.

As hopes for China's reopening are growing, economists and analysts say Beijing could abandon its zero-COVID approach as early as after the annual parliamentary meeting in Spring next year, but the reopening road will be bumpy in the short term.

The Caixin PMI is compiled by S&P Global from responses to questions sent to purchasing managers in China. - Reuters 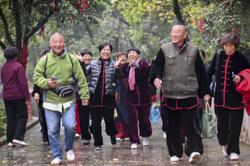