UK home prices fell 1.4% in November, the second decline in as many months and the fastest drop since June 2020, says Nationwide Building Society. – Bloomberg

LONDON: Britain’s house prices are falling more sharply than expected at the quickest pace since the start of the pandemic after a jump in borrowing costs quelled demand, Nationwide Building Society say.

The mortgage lender said home prices fell 1.4% in November. That was the second decline in as many months and the fastest drop since June 2020. Excluding the pandemic, prices haven’t fallen this sharply since the global financial crisis more than a decade ago. Economists had expected a fall of 0.4%.

The cost of home loans has soared above 6% in recent weeks from around 1% a year ago, driven by an increase in the Bank of England’s (BoE) benchmark lending rate and concerns among investors about slowing growth and rising government debt.

While costs for borrowers have retreated from their peak, they’re still likely to remain well above the levels buyers enjoyed over much of the past decade.

“Housing affordability for potential buyers and home movers has become much more stretched at a time when household finances are already under pressure from high inflation.”The average value of a home fell to £263,788 (US$319,727 or RM1.41mil), which is 4.4% higher than a year ago. The annual pace of housing price inflation slowed from as much as 14.3% in March.

Home-buyers may have to pay an average of 5% to take out a mortgage through 2028, the government’s Office for Budget Responsibility has estimated. It’s anticipating a possible 9% drop in house prices over the next two years.

For now, Nationwide said that households were largely protected from rising borrowing costs for the moment, given that 85% of UK mortgage holders were on fixed rate mortgages.Monthly payments are set to double for many of the 1.8 million UK households due to refinance in 2023, according to a Bloomberg Intelligence report.

Housing in the northern regions of the United Kingdom, Scotland and Wales has become less affordable against average household incomes compared to before the pandemic. Meanwhile London – the least affordable both before and since Covid – has remained largely the same in terms of affordability for buyers.

High borrowing costs are translating into weaker demand. BoE data published earlier this week showed mortgage approvals – an indicator for future borrowing – fell to the lowest levels since early in the pandemic.

Home sellers are already cutting asking prices, according to property search websites. Zoopla reported that one-in-10 homes for sale have lowered prices by 5% or more since September. Earlier this month, Rightmove said that sellers were slashing prices at the fastest rate since August.

Meanwhile, house prices in Australia and New Zealand are now lower than a year ago and likely to fall further as their central banks keep raising interest rates to try to gain control over inflation.

New Zealand home values suffered their biggest annual drop in more than 13 years in November, falling 2.9% from a year earlier, while Australia’s fell 3.2%, CoreLogic data showed yesterday. Annual house-price moves turned negative in both countries in October following monthly declines for most of this year. 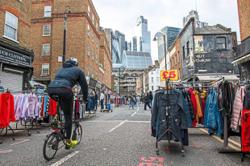