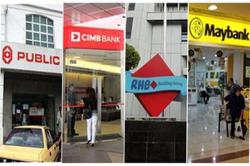 HLB tells analysts that its expectations of a solid performance for the financial year was supported by above-industry loan growth and strong net interest margin.

(HLB) is optimistic of maintaining its solid growth momentum for the remaining part of its financial year ending June 30, 2023 (FY23) following a robust first-quarter (1Q23) performance.

The fifth-largest lender in Malaysia, which reported a growth of 14.35% year-on-year (y-o-y) in net profit to RM981.41mil for 1Q23, told analysts at a recent briefing that its expectations of a solid performance for the financial year was supported by above-industry loan growth and strong net interest margin (NIM).

“We believe the share price will continue to grind higher, supported by its healthy earnings growth trajectory and strong asset quality,” the brokerage said in its report yesterday.

“Although rising interest rates would exert some pressure on asset quality, HLB believes the rise in GIL would remain well controlled at around 0.6%,” RHB Research said.

“Management is also optimistic the bank can continue to post above-industry average loan growth in FY23.

“Growth of 7% to 7.5% (FY22: up 8%) would come from the residential mortgage, small and medium enterprises, and commercial segments,” it added.

CGS-CIMB Research reiterated its “add” call on HLB and raised its TP for the counter to RM25.30 from the previous RM24.10.

It regarded HLB as the most defensive banks against credit risks.

“We reaffirm our ‘add’ call on HLB, premised on the potential re-rating catalysts of above-industry loan growth and positive growth prospects for Bank of Chengdu (BoC) contribution,” CGS-CIMB Research explained.

“Despite the lockdowns in China, HLB remains positive on the earnings outlook for BoC as it will benefit from the country’s plan to develop Sichuan province and Chengdu. HLB thinks that the strong growth of 21.6% y-o-y in BoC contribution in 1Q23 can be sustained for the next few quarters,” it added.

Meanwhile, TA Research revised its TP for HLB to RM23.20 from RM24.40, with an unchanged “buy” recommendation.

“The bank’s asset quality remained strong, with adequate pre-emptive impairment buffers set aside and a stable GIL ratio envisaged. While management will remain vigilant to ongoing headwinds in China, BoC’s profit contribution is expected to remain healthy, with a good trajectory for future growth,” it added.