"From Dec 2 onwards, MYAirline will fly to Kuching twice per day; and the flights to Kuching and Kota Kinabalu will be increased to three times per day starting Dec 23,” it said.

The flights will be conducted via the Airbus A320-200 aircraft, equipped with 180 seats in a single-class cabin.

"The all-in fares start from as low as RM48 from Kuala Lumpur to Langkawi, while the fares for Kuching and Kota Kinabalu start from RM68 and RM88, respectively,” it said.

As part of its promotional deal, the airline is also offering exclusive MYAirline vouchers which can be used for flights between Dec 1-15, 2022.

ALSO READ: MYAirline to operate as LCC, not ULCC

Chief executive officer Rayner Teo said the flight frequency would be increased as the airline’s domestic network expands, adding that it plans to start flying in the ASEAN region by the second quarter of 2023 at the latest. - Bernama

MYAirline to operate as LCC and not ULCC, says CEO 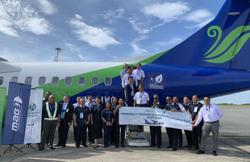