In the Fiscal Outlook 2023, it said the non-tax revenue is expected at RM67bil, declining 23% from 2022 due to lower dividends from government entities.

However, tax revenue remains the major contributor and is anticipated to grow moderately by 3.7% to RM205.6bil, in line with the projected slower economic recovery.

In line with the targeted spending approach, total expenditure in 2023 is projected to be slightly lower at RM372.3bil or 20.5% of GDP mainly due to the expiry of the Covid-19 Fund.

The allocation for operating expenditure (OE) is reduced to RM272.3bil primarily due to lower allocation for subsidies following the expected moderation in commodity prices and gradual move towards a targeted subsidy approach.

Meanwhile, the development expenditure (DE) allocation is projected to increase significantly to RM95bil on account of higher allocation for the Twelfth Malaysia Plan programmes and projects such as construction of highways and railways, medical facilities as well as educational institutions.

In addition, a sum of US$3bil (RM14bil) is provided for the redemption of 1Malaysia Development Bhd (1MDB) bond.

Moreover, a sum of RM5bil is for outstanding payments of the Covid-19 fund commitments made in 2022.

Overall, the fiscal deficit is expected to reduce to 5.5% of GDP in line with the government's commitment towards consolidating the fiscal position for a more sustainable public finance in the medium term.

Similarly, the primary deficit is estimated to reduce to 2.9% of GDP.

Guided by the medium-term fiscal framework (MTFF), the fiscal consolidation will be accelerated once the inflationary pressure dissipates and the economy fully recovers.

These assumptions offer conservative estimates of revenue and prudent expenditure allocation during the MTFF period.

Total revenue in the medium-term is projected at RM854.3bil or 14.7% of GDP, mainly contributed by non-petroleum revenue which is estimated at RM699.5bil or 12% of GDP.

Petroleum-related revenue is forecast at RM154.8bil or 2.7% of GDP.

Overall, the fiscal deficit is expected to consolidate at a gradual pace with the overall balance averaging at 4.4% of GDP for the MTFF period.

Moving forward, the government is committed to improving the credibility of the fiscal policy conduct and framework through holistic reforms.

Proactive fiscal reforms are imperative to ensure long-term fiscal sustainability, given the severity of the recent pandemic's adverse impacts on countries with fragile economic fundamentals.

The experience of other countries in reforming their fiscal framework provides a valuable reference for the government in adopting fiscal reform initiatives based on international best practices.

Overall, the government has the responsibility to ensure an effective and efficient fiscal framework to enhance the credibility of fiscal policy, while maintaining macroeconomic stability and safeguarding the wellbeing of the rakyat. 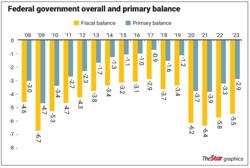 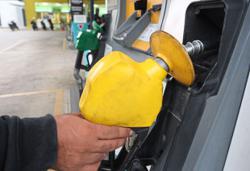