VILNIUS: Four European Central Bank policymakers on Thursday backed another big interest rate hike next month as euro zone inflation looked set for another record high, but they differed on whether it was time to think about mopping up cash from the economy.

The ECB has raised rates by a combined 125 basis points over its past two meetings and promised further increases as inflation rises towards 10% and longer-term expectations edge above its 2% target.

Strengthening the case for another 75-basis-point increase, data on Thursday showed inflation in Germany's most populous state jumped to 10.1% in September - the most since the early 1950s.

Germany will publish a nationwide flash estimate for September inflation later on Thursday, with a reading for the 19-country euro zone due on Friday.

"My choice would be 75 (basis points)," ECB policymaker Gediminas Simkus told Bloomberg TV on the sidelines of a conference in Vilnius. "I understand a couple of options may be on the table but 50 is the minimum."

The Lithuanian governor said the ECB should also start talks "as soon as possible" on reducing its balance sheet, a view echoed by his Estonian peer Madis Mueller at the same event.

This would probably be done by not replacing the trillion euros' worth of bonds the ECB bought over the past decade - when it was trying to raise price growth that was too low - as they mature.

But Portugal's Mario Centeno pushed back on that idea, fearing it would destabilise the bond market.

"Right now frontloading other debates may in my opinion have a destabilising effect that we really need to avoid," Centeno said when asked if it was time to discuss such "quantitative tightening".

Although the euro zone central bank's next policy meeting is almost a month away, ECB policymakers Peter Kazimir and Robert Holzmann have both come out in favour of a 75 bps rate increase while Olli Rehn listed 75 bps as one of the acceptable options.

The ECB has said it will keep on raising its 0.75% deposit rate at least until it hits the neutral or natural level, an undefined rate that no longer stimulates growth but does not restrict it. - Reuters 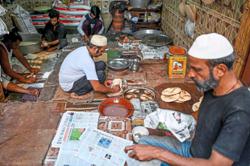