MANILA: The Philippine central bank raised its benchmark interest rates by half a percentage point on Thursday, as expected, and signalled further policy tightening to bring inflation back within its target and support a sagging local currency.

The Bangko Sentral ng Pilipinas (BSP) lifted the overnight reverse repurchase facility rate to 4.25%, as predicted by most economists in a Reuters poll. It was the fifth rate hike this year, bringing the total increase to 225 basis points.

The interest rates on the overnight deposit and lending facilities were hiked to 3.75% and 4.75%, respectively.

The BSP said inflation expectations were elevated and inflation would breach its target rate for this year and next.

"In deciding to raise the policy rate anew, the monetary board noted that price pressures continue to broaden. The rise in core inflation indicates emerging demand-side pressures on inflation," the BSP said in a statement.

"Given elevated uncertainty and the predominance of upside risks to the inflation environment, the Monetary Board recognised the need for follow-through action to anchor inflation expectations and prevent price pressures from becoming further entrenched."

On Thursday, the Philippine peso sank to a record low and has fallen more than 12% this year, the worst performer among currencies of Southeast Asia's five major economies. (Reporting by Neil Jerome Morales and Enrico Dela Cruz; Editing by Martin Petty) 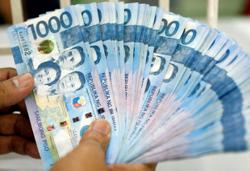